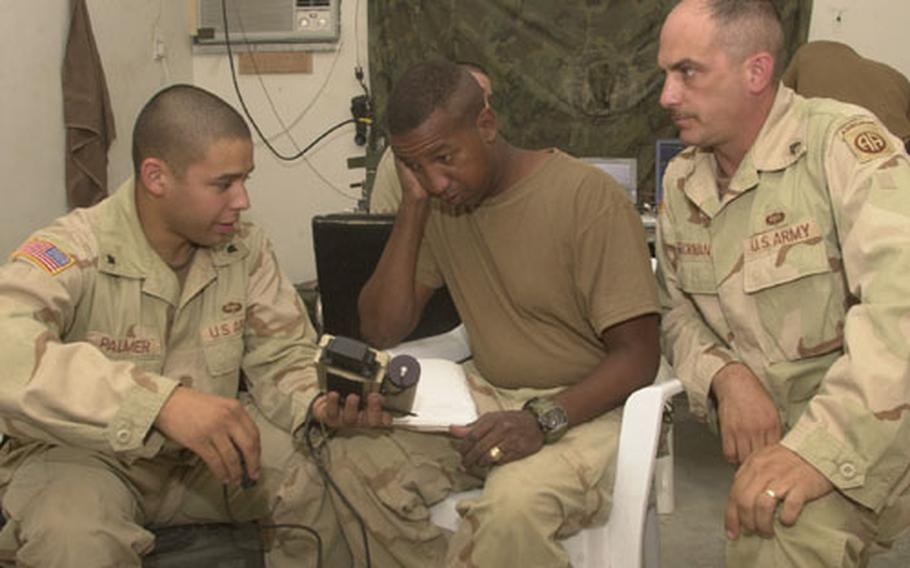 Most of the time at Company B, that would be Spc. Gabriel Palmer, a 20-year-old infantry soldier with Company B, 1st Battalion, 504th Parachute Infantry Regiment of the 82nd Airborne Division, based at Forward Operating Base Mercury outside of Fallujah.

Trained to be a trigger puller. Born to be a techie.

Young soldiers such as Palmer are embracing new digital tools as quickly as the Army can buy them. And the Army is buying them as part of a long-term digital initiative called &#8220;Land Warrior.&#8221; So, instead of it being a revolution that starts at the top and works its way down, 20 year olds &#8212; to some extent &#8212; are driving the changes, said Larry Cooper, of General Dynamics Corp., a Falls Church, Va.-based contractor.

Younger troops are captivated by gadgets such as the Commander&#8217;s Digital Assistant, which Cooper is helping the 82nd incorporate into its daily operations.

Palmer wasn&#8217;t supposed to come to Iraq with the 82nd because he had shoulder surgery just three weeks before the deployment. But he begged Tagalicud to let him come and promised to work in operations until he recovered from the surgery. Now, the company won&#8217;t let Palmer leave.

His brown eyes light up when he shows you his cool toys.

Linked to small, rugged field notebook computers via existing Army radios, the CDA allows commanders to do a multitude of glorious things, according to the specialist.

Squadrons on patrol in Fallujah show up as icons on the computer&#8217;s map. The devices can rewind data &#8220;like a video player,&#8221; showing everywhere a squadron went on patrol, Cooper said.

If soldiers are wounded in an attack, he knows precisely where they are, Palmer said.

Soldiers with the CDA in the field can create messages or call for a medical evacuation.

Commanders at Mercury can get the exact coordinates of patrols. Soldiers can even use the devices to call in artillery, said Maj. George Holguin, assigned to P.M. Soldier System, coordinating much of the technological innovations &#8220;for everything the soldier wears and carries.&#8221;

Soldiers also can use the devices to exchange data over a short distance, such as reports or photographs from the battlefield. Company commanders can download the photos and reports then send them to mission operations in the blink of an eye, photos that may add to battalion intelligence, Palmer said.

In the digital age, radios are nice. But you can do so much more with microcircuitry, Palmer said.

Now, if he could just convince others.

There is a certain amount of institutional resistance to innovation, Palmer and Cooper said. Older soldiers and officers are intimidated by new equipment, the two men said, and soldiers still are training on radios hopelessly out of date, though the 82nd is scheduled to get new radios while in Iraq.

Click. Palmer downloads a file, prints it and there it is.

Palmer is part of a generation who graduated from electronic games to personal computers when they were 6 years old, teaching themselves how it all works.

Where they intersect is that Tagalicud needs information to analyze, and Palmer is eager to get his hands on the systems that can gather it.

For instance, commanders collect data on where troops were attacked, &#8220;and I can build on the historical events &#8230; to analyze where the bad things are happening,&#8221; Tagalicud said. That intelligence can then be used to brief other commanders.

This, said Holguin and Cooper, is just the beginning. Divisions will be getting on board &#8220;sooner than later,&#8221; Holguin said. Even three years from now, there will be faster equipment and faster connections, not to mention digital equipment integrated into weapons.

FALLUJAH, Iraq &#8212; Soldiers from the 82nd Airborne Division deployed to Iraq are using more and more digital devices, capable of doing everything from tracking troops on the battlefield to compiling data.

The gadgetry includes a Commander&#8217;s Digital Assistant, a hand-held device that looks similar to a regular personal digital assistant encased in a steel box, and a Panasonic 34 Tough Book notebook that, again, looks blast proof.

Transportable digital devices are just the beginning of a battlefield revolution through 2006 under a program called &#8220;Land Warrior,&#8221; said Maj. George Holguin. The next round of changes will start with a move to satellite data delivery that will offer such devices with broader bandwidth, for faster transmission and reception of large files.

By 2006, communications equipment may be integrated into complete fighting systems, giving U.S. troops a huge battlefield advantage, he said.

The 82nd Airborne is seeing the beginning of a technological revolution that may culminate in a battle kit that is more akin to what fans might see on the &#8220;Star Trek&#8221; TV series than to the current concept of a battle uniform.

For example, a soldier&#8217;s Kevlar helmet will have a flexible screen showing him map points, voice recognition and even a super-hearing device that increases capabilities to 100 meters out, Holguin said. Yet, the device will muffle the report of a M-240B light machine gun in a fraction of a second, then instantly return the soldier&#8217;s super-hearing capability.

The kit will have electronics that may even allow the soldier to blend into any background, making him virtually invisible to the enemy.