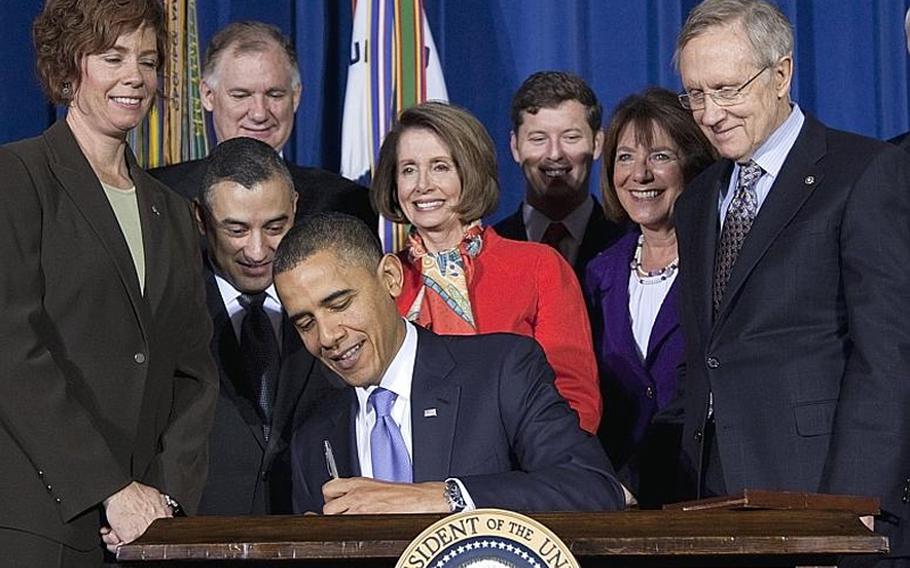 WASHINGTON &mdash; Before a cheering crowd of veterans and gay rights advocates, President Barack Obama signed into law a repeal of the military&rsquo;s &ldquo;don&rsquo;t ask, don&rsquo;t tell&rdquo; policy on Wednesday, charting a path for openly gay troops to serve in the U.S. military.

Even though full implementation of the repeal is still months away, Obama praised the signing as a historic moment for equality and national security.

The signing ends a tumultuous year of debate on the controversial law, put in place in 1993 by Obama&rsquo;s Democratic predecessor Bill Clinton as a compromise between liberals who wanted open service and conservatives who feared a move would damage military morale and readiness.

In his remarks, Obama cited the turnaround in public opinion on the issue over the last 17 years and thanked Defense Secretary Robert Gates and Joint Chiefs Chairman Adm. Mike Mullen &mdash; both holdovers from President George W. Bush&rsquo;s administration &mdash; for their public efforts backing a repeal.

Mullen, who attended the signing, drew several standing ovations from the emotional crowd during the hourlong ceremony, and was mobbed with requests to pose for pictures with audience members afterwards.

Rep. Patrick Murphy, D-Pa., an Iraq War veteran who sponsored the repeal legislation in the House, and Sen. Susan Collins, R-Maine, who was the first senator to break with her party to support the repeal effort also received shouts and cheers as they took the stage for the bill signing. And the crowd burst into chants of &ldquo;Yes we can&rdquo; and &ldquo;U-S-A&rdquo; throughout the event, with tears and hugs among the audience members.

The law won&rsquo;t actually be repealed until the Pentagon certifies the results of a recent study into the issue. So far Gates has declined to say how long that might take, but Obama said he is confident it can be completed &ldquo;quickly and efficiently&rdquo; in coming months.

&ldquo;With any change, there is some apprehension,&rdquo; he said. &ldquo;But, as commander in chief, I am confident we can affect this change in a way that only strengthens our readiness. People will look back on this moment and wonder why it was ever a source of controversy in the first place.&rdquo;

Opponents of a repeal have said the move will hurt military recruiting and retention, and point to the Pentagon&rsquo;s own study indicating unease within combat units at the prospect of serving alongside an openly-gay colleague.

But gay rights advocates dismissed those concerns as exaggerated, and hailed the signing as a civil rights victory akin to the integration of blacks into the service in the 1940s.

More than 14,000 gay troops were kicked out of the military under the law since 1993. Obama said he hopes they consider re-enlisting, once the repeal is finalized.

&ldquo;I say to all Americans, gay or straight, who want nothing more than to defend this country in uniform, your country needs you, your country wants you, and we will be honored to welcome you into the ranks of the finest military the world has ever known,&rdquo; he said.