An Iraqi soldier holds up a mortar launcher he found hidden in a palm grove during Wednesday&#39;s Operation Probe raid. (Teri Weaver / S&S)

An Iraqi soldier holds up a mortar launcher he found hidden in a palm grove during Wednesday&#39;s Operation Probe raid. (Teri Weaver / S&S) 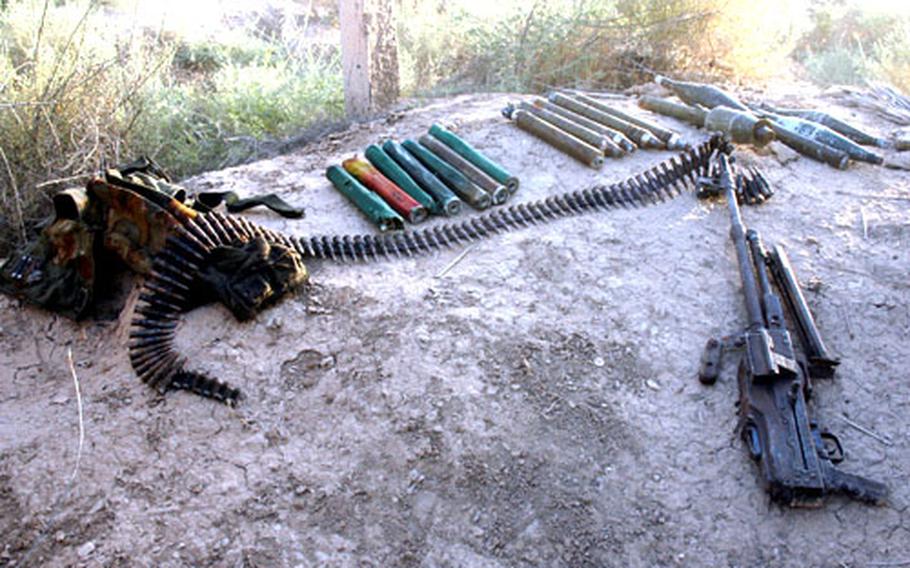 Iraqi soldiers found this ammunition and weaponry buried in a palm grove during Wednesday&#39;s raid. A man who lives in the area helped them find the hidden stash. (Teri Weaver / S&S)

SAYD AWWAD, Iraq &#8212; American soldiers walked through a palm grove just after daybreak hoping to surprise this Sunni village and the insurgents suspected to live here.

They stumbled, almost literally, upon three timing devices created to trigger homemade bombs. Iraqi soldiers came over to look and found a mortar launcher in the tall grass.

Three platoons from the 2nd Battalion joined 140 Iraqi soldiers this week in Operation Probe &#8212; a raid of about 100 houses in this farming community just a few miles outside of Baghdad&#8217;s northern suburbs.

Like many Iraqi and American operations, the Iraqis provided the strength of the mission while the Americans provided the more technical aspects, such as tests for explosives and support from the air. The Iraqis brought their expertise in Arabic and recognizing false documents; the Americans flew fighter jets and oversaw the detention of 27 men.

Some of those detained were accused of lying about their names. One was suspected of knowing about weapons caches, even when no weapons were found. Some had guns with no registration papers. Some had papers believed to be false.

And at least two of the 27 captured that morning were on either the American or Iraqi &#8220;wanted lists,&#8221; names of men accused of building, setting or financing homemade bombs that have hit surrounding areas. The soldiers also found a dozen guns, nine rocket-propelled grenades and seven rockets.

It took a convoy of nearly three dozen trucks to get the more than 200 soldiers from both sides down to Sayd Awwad.

Four weeks ago, a much smaller group of Iraqis and Americans went to Sayd Awwad to raid one house. They ended up in a five-hour gunfight in which one Iraqi soldier was killed.

Wednesday&#8217;s sunrise raid was meant to surprise and squeeze that insurgency, and the four-hour search passed with no violence.

Turner pulled his trucks into a farmer&#8217;s driveway at dawn. The family was sleeping in beds in their yard, a common practice to combat the summer heat.

Men sleeping outside were gathered by Iraqi soldiers and tested for traces of explosives on their hands by the Americans. All came up negative. The women and children in the families stood by and watched.

There were few friendly faces in the farming community, but one man from the village linked up with Iraqi soldiers and showed a couple of sites where he thought explosives were hidden. The Iraqis uncovered a mortar launcher and some rockets.

One Iraqi colonel took a small band of his soldiers into the palm groves. He walked through front and back yards, questioning the men at the houses. One man showed his papers and answered questions from the colonel. He was released, and the colonel walked out of the back yard past a water pump covered in Arabic.

The colonel turned around and ordered the man to be put in cuffs. The man&#8217;s real name was spray painted on the water pump, the same name as on the colonel&#8217;s own wanted list. It was still before 7 a.m., and the Iraqis had two dozen detainees so far.

By 9 a.m., the searches were done and the convoy headed home. But before they left, Hall yelled at two Iraqi soldiers. The soldiers were caught stealing some of the farmers&#8217; crops, and Hall dressed them down with the help of an interpreter.

As the convoy pulled out, more than a dozen Iraqi trucks passed by. One had a bunch of grapes from a nearby farm lying on a seat.