Khalid Khodir Salih, an engineer at the Khark Water Treatment Plant, shows how the plant functions. Salih said he has noticed an increase in attacks since Americans began guarding the facility. U.S. troops blame the attacks on in-fighting between the predominantly Sunni police security force and the mainly Shiite Iraqi soldiers also guarding the plant. (Anita Powell / S&S)

Khalid Khodir Salih, an engineer at the Khark Water Treatment Plant, shows how the plant functions. Salih said he has noticed an increase in attacks since Americans began guarding the facility. U.S. troops blame the attacks on in-fighting between the predominantly Sunni police security force and the mainly Shiite Iraqi soldiers also guarding the plant. (Anita Powell / S&S) 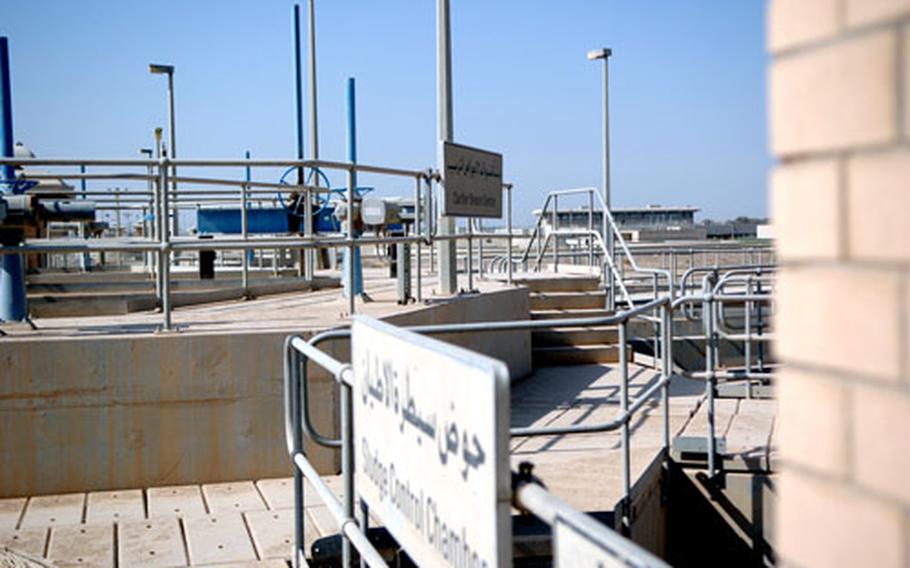 KHARK WATER TREATMENT PLANT, Iraq &#8212; The desolate Khark Water Treatment Plant, located in a dusty corner of northern Baghdad Province, is not an obvious front in this nation&#8217;s war on terror.

Yet the plant, which pumps the nation&#8217;s most vital resource to more than 70 percent of Baghdad&#8217;s residents, is a microcosm of the enduring struggle Americans and Iraqis face in bringing stability to this country.

The two Iraqi groups distrust, dislike and often try to kill each other, often incorporating outside insurgent groups to do so. American forces &#8212; Company C of 1st Battalion, 13th Armor Regiment, 3rd Brigade, 1st Armored Division, of Fort Riley, Kan. &#8212; are stuck in the middle. The soldiers are trying to deflect the groups&#8217; attacks against each other while also staving off attacks from outside fighters.

If the plant were incapacitated, officials say, chaos would ensue in Baghdad.

The company guards the plant around the clock.

The Khark Water Treatment Plant was built in 1985, during the height of the Iran-Iraq war. In the last 13 years, says plant supervisor Ahmed Abd Homaadi, the facility functioned largely without incident. The plant pumps about 300 million gallons of water a day from the Tigris River to Baghdad, said engineer Khalid Khodir Salih.

Homaadi and Salih attributed the plant&#8217;s current security problems to the American presence.

Battalion officials dispute the accusation, saying that the plant&#8217;s problems also are caused by growing unrest between its two sets of guards: the Sunni-dominated Force Protection Service, a civilian group; and the Shiite-dominated Iraqi army. Both groups have been known to harbor insurgents or collaborators, Rippee said.

The plant&#8217;s civilian guard corps, hired by the Mayorality of Baghdad, are also quick to assign blame.

&#8220;When the Americans came here, the terrorists came here too,&#8221; said guard Mustafa Esmaeel Abdulla, 22, who said he has worked at the plant for six years.

The Iraqi army, for its part, says it has trouble holding down such an important target in such a hostile area.

American soldiers at the water plant &#8212; many of whom live in its aging, dilapidated confines &#8212; say the fight to keep the peace is a constant one.

Of four Platoon B soldiers interviewed, all had earned Combat Action Badges, though one soldier had only been stationed at the plant for three months.

Some soldiers said they wanted to persist.

The enormity and difficulty of the task is perhaps the only point on which all three groups at the water treatment plant can agree.