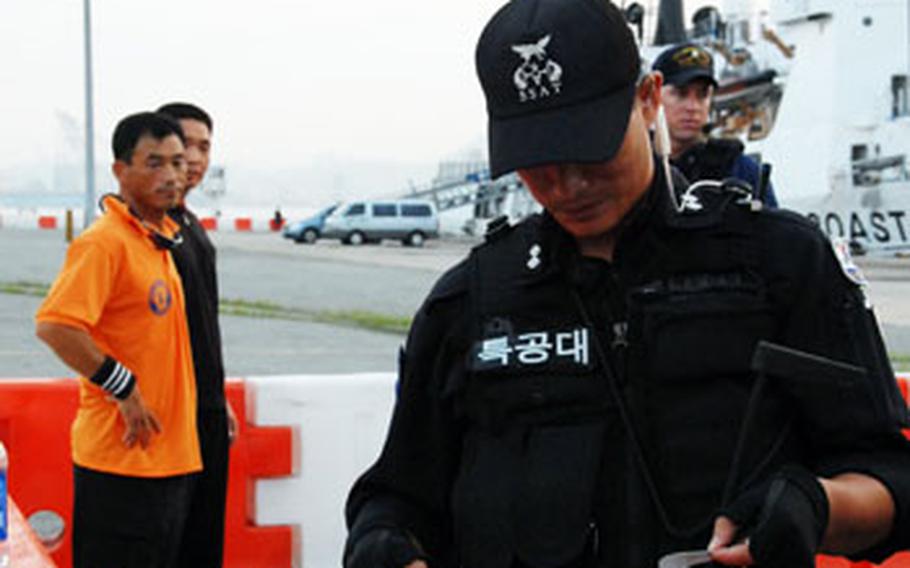 A South Korean Coast Guardsman, a member of a special sea attack team, tests for substances indicating explosives during a vehicle check this past week, as the driver and passenger wait behind him. The check was part of an exercise at Busan between the U.S. and South Korean coast guards. (Ashley Rowland/Stars and Stripes)

A South Korean Coast Guardsman, a member of a special sea attack team, tests for substances indicating explosives during a vehicle check this past week, as the driver and passenger wait behind him. The check was part of an exercise at Busan between the U.S. and South Korean coast guards. (Ashley Rowland/Stars and Stripes) 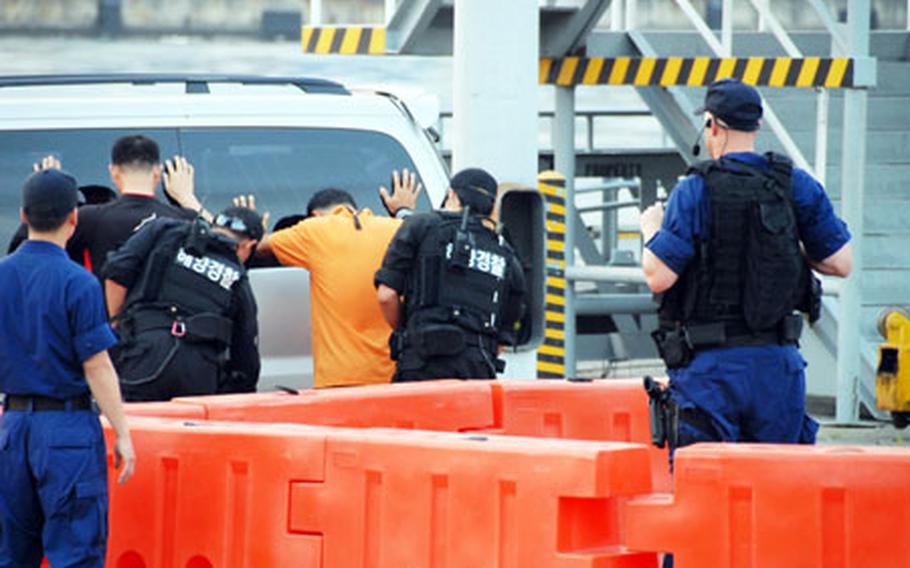 Members of a South Korean Coast Guard sea special assault team pat down a van driver and passenger during a joint U.S.-South Korean exercise this past week. Members of a U.S. Coast Guard maritime safety and security team from Honolulu, in blue uniforms, look on. (Ashley Rowland/Stars and Stripes)

BUSAN, South Korea &#8212; It&#8217;s sunset when a silver police van pulls up to a military checkpoint inside this giant shipping harbor. Inside is the leader of an elite South Korean coast guard team, on his way to visit an American cutter docked a few hundred feet away.

The South Korean guards &#8212; members of a team under his command &#8212; let him in after inspecting his identification card. But his American counterpart watching nearby shakes his head: An ID alone isn&#8217;t enough, even for a high-profile guest.

"Did you validate with the ship that they had a visitor?" asked Lt. j.g. Joe Azzata, leader of a U.S. Coast Guard marine safety and security team.

This is the first scenario in an exercise between the two Coast Guard teams, and the South Koreans think they have handled the entry point correctly. In a country that has never had a major terrorist attack, they have.

But Azzata tells them that in the terrorism-wary United States, his team would have called the cutter to see if anybody on board was expecting a visitor. Or, better yet, gotten a list of expected visitors earlier in the day.

"Typically, you can fake an ID, but if the ship doesn&#8217;t know about it, all this is is a vehicle with lights on it," Azzata said of the police van.

The exchanges were the point of last week&#8217;s anti-terrorism Morning Calm exercise: See how each country&#8217;s coast guard handles different threats, and learn from it.

"We show them how we do our law enforcement, and they show us how they do theirs. If they do something better than we do it, we can incorporate it into our practices," said Lt.

Cmdr. Scott Kim, a U.S. Coast Guard officer who serves as a liaison to South Korea.

During the 14-hour Morning Calm exercise, South Korean and U.S. teams, each with about 20 people, responded to mock attacks: a waterborne explosive, South Korean beef protesters who turned violent, and a hostage-taking on the U.S. Coast Guard Cutter Munro, which arrived from Alaska for the exercise Monday morning.

The American team is stationed at Honolulu. This is the first time a Maritime Safety and Security Team has deployed with its weapons and diving gear to train with another nation&#8217;s coast guard, Kim said.

The MSSTs were formed after Sept. 11, 2001, to prevent terrorist attacks at U.S. ports and are more special missions than special operations, said Lt. Cmdr. Dimitri Delgado, a member of the Pacific Area Command staff.

Each team has bomb-sniffing dogs and divers to search for underwater explosives. If they find something, they call in an explosive ordnance disposal team or a police department bomb squad to detonate it.

In South Korea, the coast guard is essentially a police force on the water, and the Sea Special Attack Team is its specialized antiterrorism arm.

There were other differences between the teams.

Shin Won-seob, assistant inspector and a South Korean team leader, said the Americans were more aware of potential terrorist threats and more willing than the Koreans to put their citizens through long searches.

But the Americans stressed the teams had much in common, and seemed to click the more they worked together.

Before the Munro arrived Monday, three teams of divers took turns checking the area where the cutter would dock. Not only could they not speak underwater, but they had to communicate through interpreters before the dive.

Still, the operation went smoothly. Delgado said he wished he could show footage of one team at the end of their dive.

"They came to the surface, and they did a little fist bump," Delgado said. "It was just cool to be looking down and seeing it, because that was the whole point."