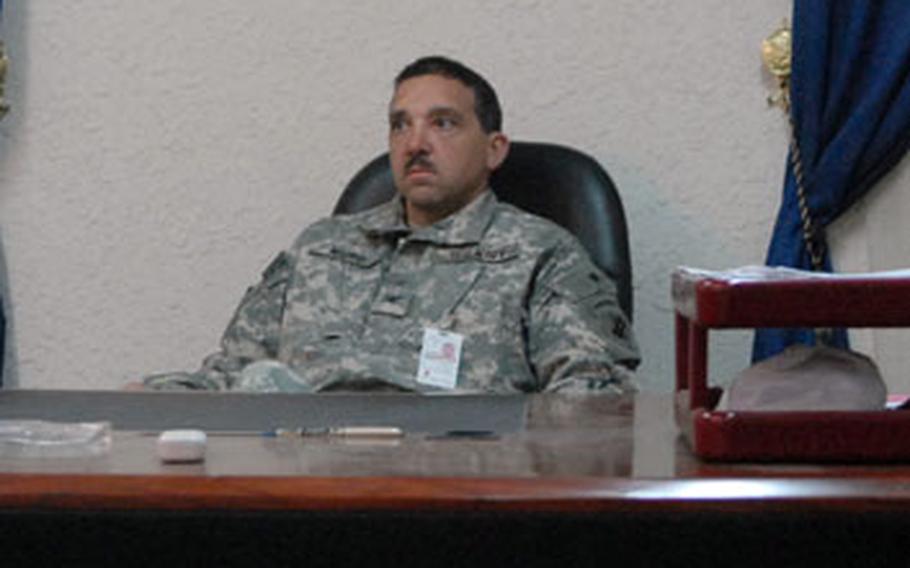 Navy Capt. Bob Muro, deputy leader of the Provincial Reconstruction Team in Kirkuk, handles much of the day-to-day operations of the group. He is sitting in his office preparing himself for a day of meetings in the Kirkuk Government Building on March 4. (Zeke Minaya / S&S)

KIRKUK, Iraq &#8212; Huddling with his staff to begin the day, Navy Capt. Bob Muro resembles a mayor or congressman, his meetings schedule filled with politicians, economists and civic advisers.

And though he is an integral part of the nascent democratic government in Kirkuk province, Muro has never been listed on a ballot or received a single vote.

He is deputy head of a U.S. Provincial Reconstruction Team, the all-purpose civic rebuilding squads launched throughout Iraq in 2005 after the inauguration of the program in Afghanistan.

And though the effectiveness of the teams in Iraq has been limited by sectarian violence, Muro said efforts in Kirkuk have moved forward, aided in large part by the relative security of the region.

The reconstruction teams are joint civilian and military efforts, staffed by soldiers, diplomats and contractors. Their mission is to mentor the fledging democratic institutions of the provinces such as the courts, city councils and police departments. But, as needs have arisen, the groups have handled nearly every aspect of municipal management &#8212; arranging for trash pickup, erecting mobile-phone towers and distributing small business loans.

There are presently 10 such teams, along with eight local governance satellite offices in Iraq. As part of the renewed push to stabilize the country, the State Department recently announced that the number would double.

Sectarian violence has made it nearly impossible for teams in certain areas of the country to set foot off an American base. According to a report published last year by the special inspector general for Iraq reconstruction, only the teams in Ninawa, Babil, Baghdad and Kirkuk generally are able to meet regularly with Iraqi counterparts. Bureaucratic squabbles between the two agencies responsible for staffing &#8212; the Pentagon and the State Department &#8212; also have slowed progress, according to the report.

Muro said he made it a priority to stake out office space near the decision makers in the province and to be visible on a daily basis.

&#8220;If you don&#8217;t interact with government officials, they are not going to include you in their plans,&#8221; he said. Muro said he is simply attempting to match the dedication he has seen from key members of the Kirkuk government.

&#8220;The governor has had four attempts on his life,&#8221; Muro said. &#8220;In November a suicide bomber jumped on the hood of his car and blew himself up. There are a lot of brave guys here who are trying to make things better for this province.&#8221;

Muro said his days go by in a blur of meetings. This past Sunday was typical, when he seemingly could not take two steps in the Kirkuk Government Building without someone stopping him with a request or question.

&#8220;It would be very easy to force things on [Iraqis], but you have to listen to what they are saying if you want those changes to last after we go home,&#8221; Muro said.

The chores he found Sunday also were representative of the challenges he faces, Muro said. A former mayor of one of the smaller cities had been released from jail and had returned to attending city council meetings to try to reclaim his former influence.

Muro sat in the initial planning session for an industrial park and had his staff confirm that the head of the provincial council and the governor would both attend an upcoming budget conference in Baghdad. He also set a dinner date with Rizgar Ali Hamajan, the head of the provincial council, for sometime next week when they will &#8220;just talk. No business, just talk,&#8221; Muro said.

Col. Goran Gilly, head of the police force for the government building, said he has a good working relationship with Muro. &#8220;He has a fair manner with everyone,&#8221; Gilly said through an interpreter. &#8220;We work together like one team.&#8221;