Team Korea roasts, poaches its way to the top in culinary arts competition 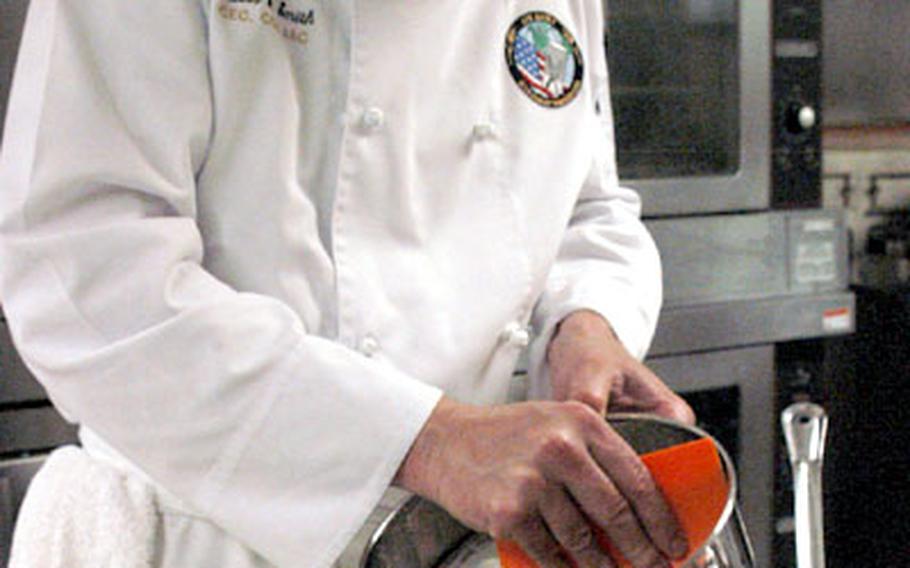 Still, he tried Tuesday night to transform a pile of thawed filets, doctored with heavy cream and white bread, into the beginnings of a velvety, white-wine infused filling meant to complement a poached flounder.

Once frozen, fish retains too much water to make a luxurious filling, or at least one meeting Smith&#8217;s standards. He tossed the mixture, fetched some shrimp &#8212; a much more forgiving frozen ingredient &#8212; and began again.

Smith and his team of U.S. military cooks were upholding high standards as they entered this week&#8217;s Seoul International Tourism and Food Expo. In March, Team Korea won Installation of the Year at the 30th annual U.S. Army Culinary Arts Competition.

In the U.S. Army contest, Smith and a dozen other Army chefs from South Korea showed off their skills in fine dining, field cooking, pastry concoctions and a culinary quiz show. Smith shies from the recognition but official results show he won the title of distinguished military chef of the year.

The Seoul competition is expected to feature about 16 military teams; the U.S. team is the only one of the 16 not from South Korea&#8217;s military, organizers said.

Smith and his team stayed up all night between Tuesday and Wednesday preparing for the cold-plate competition, the first of the three-day event. They made five complete dinners &#8212; braised lamb shanks, roasted pork loin, grilled duck, saut&#233;ed chicken breast and the flounder &#8212; plated them and carted them to the Coex Convention Center in Seoul to be judged on visual display. Thursday and Friday, they were to recreate most of the same dishes on site for judges to taste.

Smith helps oversee food services for the 19th Theater Support Command, which means he helps manage all of the work it takes to feed the 8th Army in South Korea. He says he likes the competitions: They&#8217;re one of the few times he gets to return to the kitchen.

He also likes teaching younger cooks, such as Ruff and Elias, working beside him Tuesday night in the 305th Quartermaster Company dining hall kitchen on Yongsan.

Smith said he realizes a mess hall rarely will serve braised lamb shanks or bean ragout with duck confit, another recipe from the competition. But it&#8217;s the techniques, not the ingredients, that are valuable to the young soldiers who cook for troops, he said.

&#8220;Roasting, searing, braising, poaching. These are all skills we do for these competitions,&#8221; Smith said. Soldiers like Ruff and Elias can take them back to their own kitchens to teach others, he said.

The competitions help in other ways, said Ruff, 25, from Chicago. The barbecue sauce he prepared for the roasted pork loin wrapped in bacon &#8212; part of Wednesday&#8217;s entry &#8212; is the same one he serves on soul-food Thursdays at the 305th. The same goes for the collard greens and sweet potatoes, minus the fancier pecan crust he made for the competition.

Instead, he joined the Army, where college classes are free and he gets to cook for a living. He&#8217;s signed on to stay in South Korea through 2008.

Elias won a bronze medal in the junior chef competition, part of the contest at Fort Lee.