Team from DODDS, AFNORTH to work together in competition 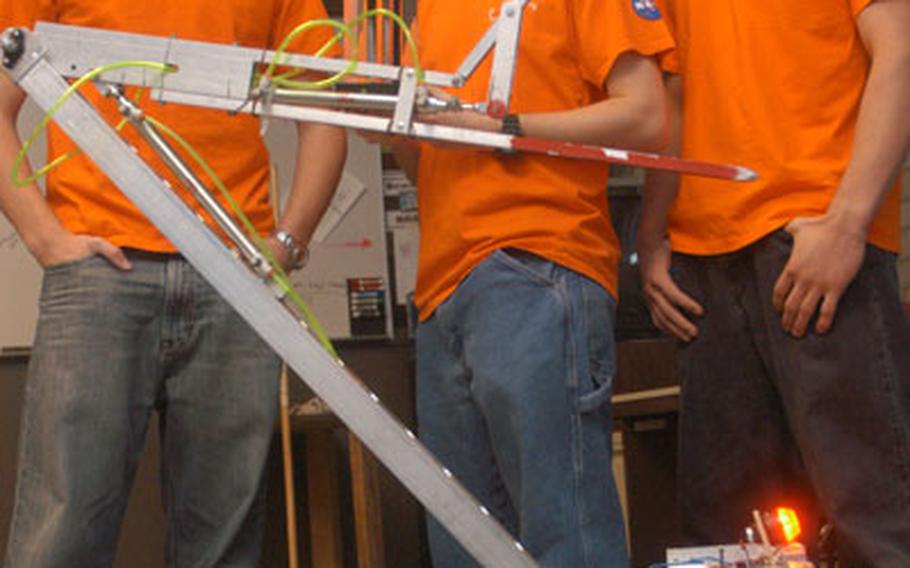 This past weekend, a team of high-school students from Wiesbaden, Germany, met up with their counterparts at AFNORTH, the DODDS-affiliated international school in southeastern Netherlands.

Normally, when two high schools meet on a Saturday, it involves a contest. And this time was no different, in a sense.

&#8220;They were down here for the kickoff,&#8221; said Greg Blankenship, the technical studies teacher at AFNORTH.

Only this time, both schools were on the receiving end.

AFNORTH welcomed members of the Wiesbaden High School Technology Club to join its students for the live broadcast of this year&#8217;s challenge in the FIRST Robotics Competition. In essence, the challenge requires participating high schools to design and build a robot &#8212; with the aid of a common kit of parts &#8212; that can outperform all the others while engaging in a predetermined set of tasks.

The Robotics Club at AFNORTH took part in &#8220;the game,&#8221; as it is known, last year and is geared up this time to share the fun and frustration with another interested school. As was the case in 2007, AFNORTH, with the help of a NASA grant, will participate in the regional competition in Las Vegas in March.

&#8220;They are our mentors,&#8221; said Frank Pendzich, who teaches engineering, drafting and computer sciences at Wiesbaden.

The process of making the field of participating high schools is involved and fraught with pitfalls, mainly money and getting sufficient technical guidance from adult volunteers. Still, more than 1,500 teams are expected to take part in 41 regional competitions, leading up to the championship in April in Atlanta.

After Blankenship&#8217;s kids were the first in the Department of Defense Dependents Schools to partake in the annual competition last year, other American schools in Europe took note. Wiesbaden and Aviano (Italy) high schools have expressed the most interest so far, though Blankenship believes they are not alone.

In a nutshell, this year&#8217;s task is to design a robot that can race around an oval track while moving (pushing, bouncing, etc.) 40-inch inflatable balls, sometimes over or under a 78-inch-tall obstacle as other teams negotiate the course, too.

FIRST, an acronym that means For Inspiration and Recognition of Science and Technology, was itself designed to heighten interest in science, engineering and technology. The annual challenge is now into its 16th year.

The Wiesbaden students will handle the infrared remote sensory device, or navigation system, while the AFNORTH contingent will design and build the robot, using, in part, the kit supplied to all teams.

Last year, in the Las Vegas regional, AFNORTH students placed 17th out of 51 schools, which was remarkable given it was their first year.

As for this year&#8217;s model, Zembower and others are still in the design phase. The team has six weeks to finish its robot and ship it off to the States for the March competition, which will mean late nights at school.

For more information on the competition, go to: www.usfirst.org.