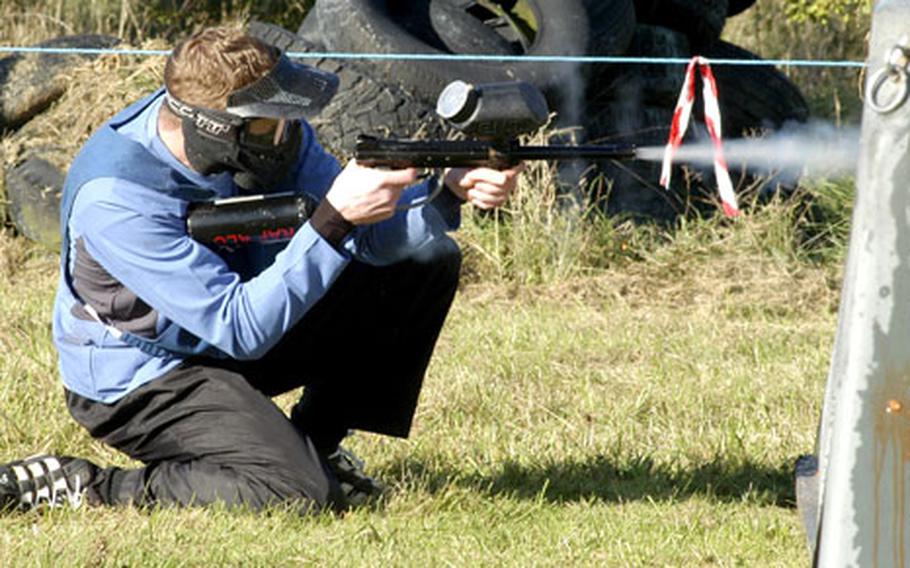 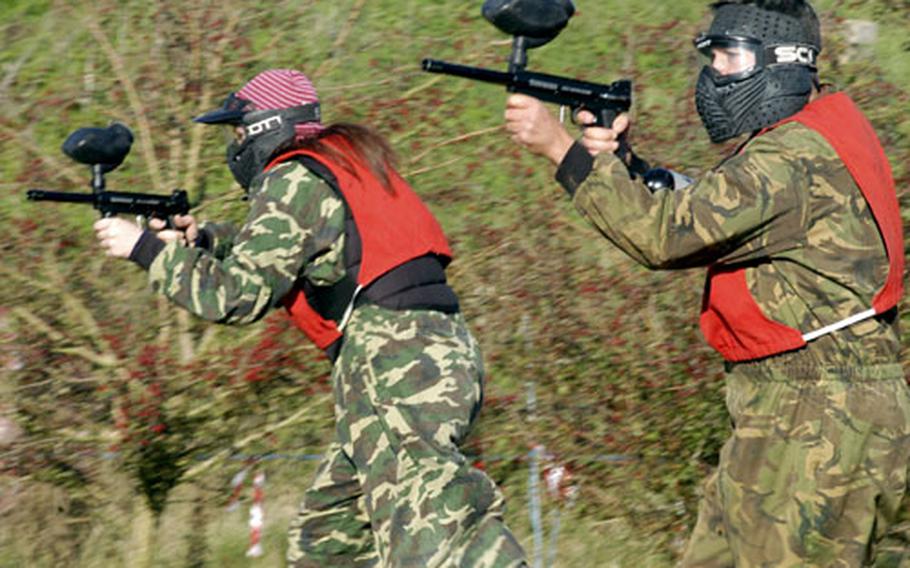 Jenai Coussens, left, and Joe Twilla, civilians representing RAF Mildenhall, head for cover at the beginning of a bout with RAF Croughton during the tournament. (Sean Kimmons / S&S) 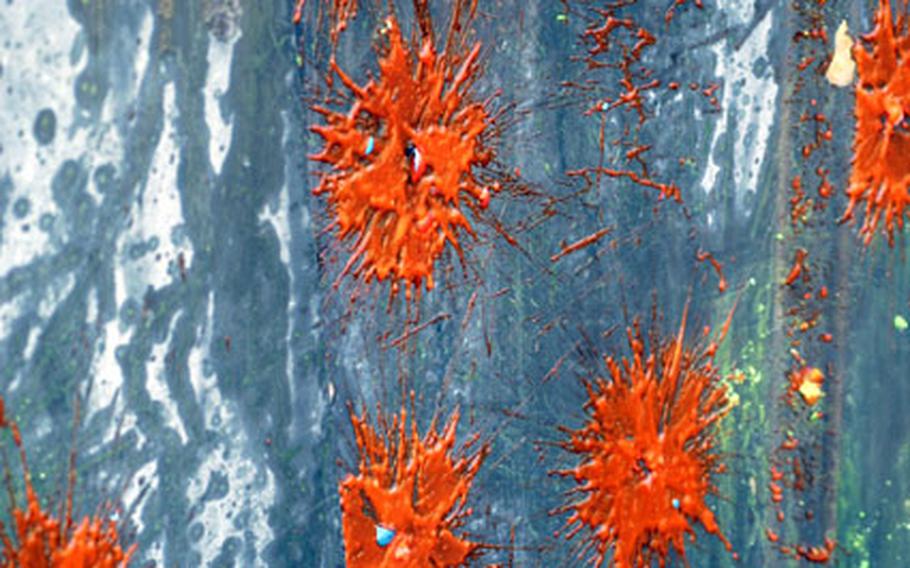 Traveling at about 280 feet per second, paintballs leave their mark on everything they hit, including this barrier at RAF Molesworth&#39;s paintball course. (Sean Kimmons / S&S) 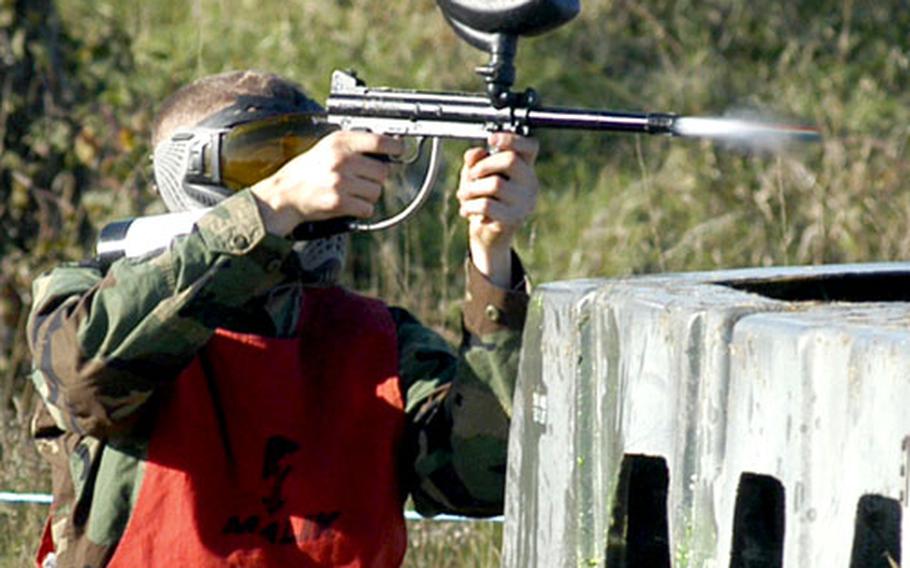 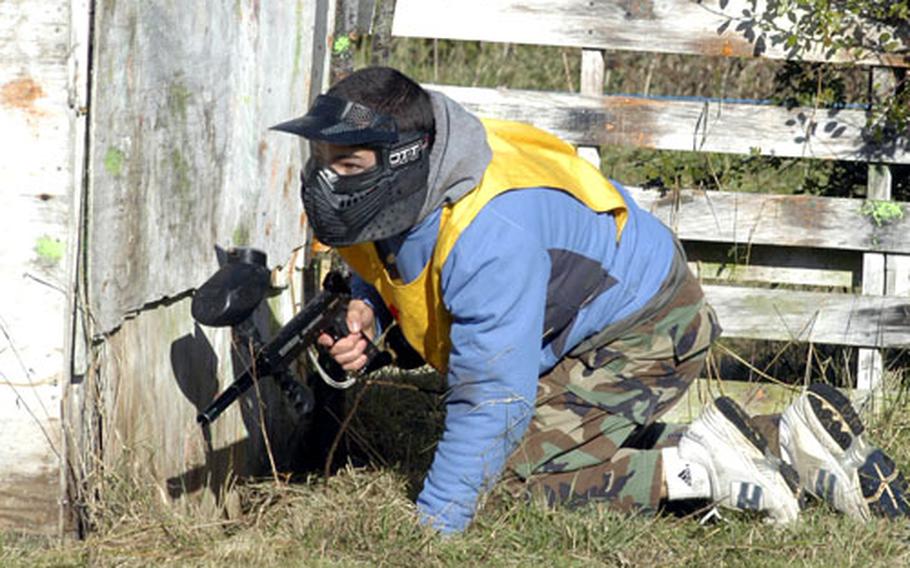 RAF MOLESWORTH &#8212; Toting a paintball gun, Airman 1st Class Jeremy Sealey ran for cover amid a barrage of rapid-flying paintballs shot by his opponents in a paintball tournament on this remote base last Friday.

With most of his body hidden behind a barrier situated along a paintball course, Sealey returned fire until one paintball, traveling at about 280-feet per second, struck his mask and splattered orange paint on his face.

It was now up to his RAF Croughton teammate, Airman 1st Class Glenn Cook, to pull out a victory against their foes from Aviano Air Base, Italy.

Cook rose to the challenge and took both of them out to help his team win and advance in the double-elimination tournament, sponsored by the U.S. Air Forces in Europe Project Cheer program.

Despite its loss, the Aviano team eventually placed second in the tourney, ahead of the third-place Croughton team. A crew from Spangdahlem Air Base, Germany, took first place.

The tournament had two-person teams from nine USAFE bases shooting and dodging paintballs in seven-minute bouts. The bouts rarely even lasted a few minutes, since one shot was a kill.

Speedball is a fast-paced paintball game played on a small course, usually with more obstacles. The paintball course at Molesworth, which Barr thinks is about 15 acres, was modified into two mini courses approximately 150 feet by 75 feet.

The need for an adrenaline rush is why Sealey signed up for the tournament. Once a game starts, he said, his mind changes to all-or-nothing mode, which may have got him in trouble in the match against Aviano.

&#8220;I forget about everything except for winning,&#8221; said the 21-year-old who was sporting a welt on his neck that came from a paintball strike.

Cook calls paintball an intense sport where injuries such as welts, bruises and cuts are the norm.

If you&#8217;re in dire need for simulated combat, the paintball course is open any day upon request. Prices are $15 for five 15-minute games or $20 for eight games. The price includes safety equipment, paintball gun and 100 paintballs. Visits can be booked through each base&#8217;s outdoor recreation center.