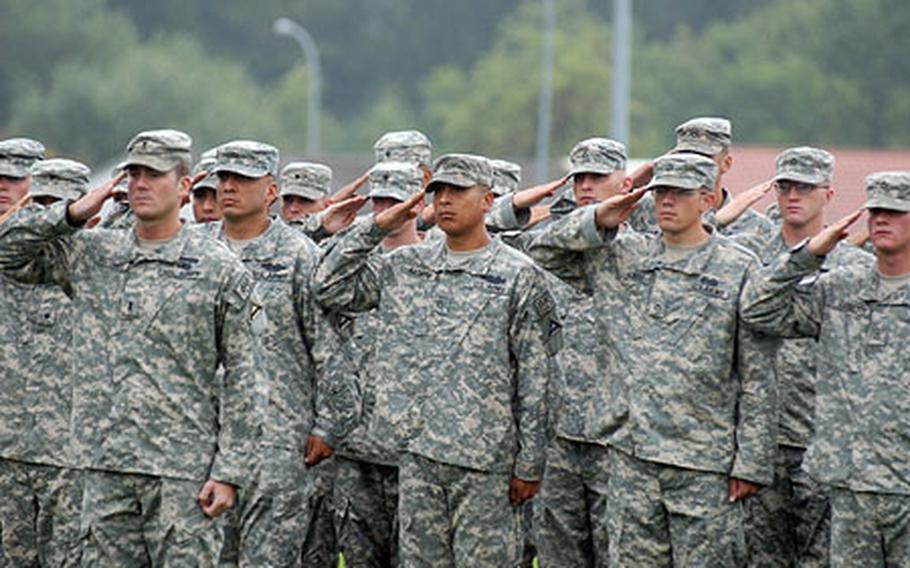 Members of Team Blackhawk parade at a ceremony at Hohenfels to welcome them back from Afghanistan on Tuesday. (Seth Robson / S&S)

HOHENFELS, Germany &#8212; After six months, 280 combat patrols and 50 firefights in Afghanistan, Team Blackfoot was welcomed home to Hohenfels on Tuesday.

Team Blackfoot, made up mostly of soldiers from Company B, 1st Battalion, 4th Infantry Regiment, deployed to Zabul province in Afghanistan in January in support of the 812th Romanian Infantry Battalion.

Rain fell on soldiers from the unit as they paraded at Hohenfels Warrior Field at a welcome-home ceremony in front of friends and families.

&#8220;It may be raining but there is a lot of sunshine on Warrior Field right now,&#8221; Joint Multinational Readiness Center operations group commander Col. Tom Vandal told the troops.

Team Blackfoot conducted continuous combat patrols during their six months in Afghanistan and helped prevent a resurgence of Taliban influence in Zabul, he said.

Spc. Gary Layman, 20, of Stuart, Va., said the most exciting moment of the deployment was the first time insurgents attacked his forward operating base.

&#8220;I was cleaning out the ETT [Embedded Training Team facility] when a [rocket-propelled grenade] flew over and hit right inside the front gate. It knocked me back in the building and some buddies in the smoking area got blown off their seats,&#8221; he said.

Team Blackfoot soldiers interacted with locals on patrols and threw candy to children, he said.

&#8220;The locals were very friendly and helpful. They were happy we were there because there were a lot of Taliban in the area when we first got there,&#8221; he said.

Jessica Stofan was at the parade field to welcome home her husband, 1st Lt. Kevin Stofan, a platoon leader with Company B.

How were the last six months on the home front?

&#8220;It was awful. I was constantly worried but as time went on I got used to it,&#8221; said Jessica Stofan, who stayed in touch with her husband over the Internet. &#8220;He told me very little but he always told me he was safe and doing well. We usually talked about my life and not so much about what he was doing.&#8221;

Company B commander Capt. Sam Edwards said the combined effort of his men and their families produced impressive combat statistics. He praised soldiers for continuing combat operations after friends had been injured.

&#8220;They diminished, if not defeated, the enemy in their area of operations,&#8221; he said, adding that the unit killed or captured enemy leaders and significant numbers of enemy combatants.

Thirty-one members of the team were awarded for valor during operations in Afghanistan.