Team at Okinawa hospital helps get out the military vote 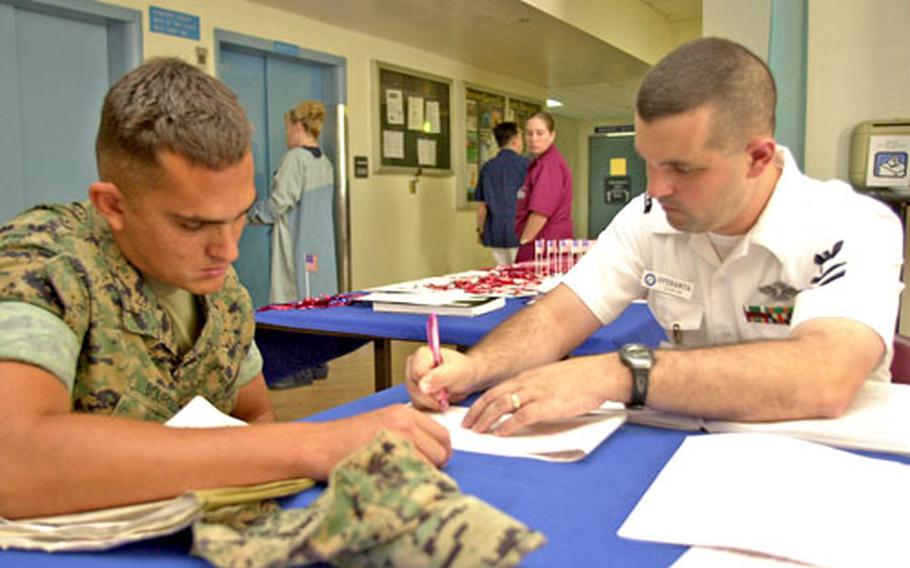 CAMP LESTER, Okinawa &#8212; In an effort to help people cast their votes, the volunteer staff of U.S. Naval Hospital Okinawa&#8217;s voting assistance team has set up a weeklong voting station at the hospital.

The team picked the prime spot in the hospital for the lunch-time drives: right in front of the caf&#233;&#8217;s doors, just down from the building&#8217;s main entrance. As potential voters walked by, sailors asked whether they were registered to vote and whether they&#8217;d cast their ballots.

According to Lt. Cmdr. Cyrus Rad, the hospital&#8217;s voting assistance officer, the general deadline for voters to mail their completed absentee ballots is Oct. 15, but some states don&#8217;t send their absentee ballots out until after that date.

That&#8217;s the main purpose of the makeshift voting station in the hospital, Rad said. His staff walks registered voters through the paperwork.

Petty Officer 1st Class Shannon Dittlinger, one of the voting assistance volunteers, said the team will be set up in the hospital through Saturday and will travel to all branch medical clinics on Oct. 12. She said team members will return to the hospital on Oct. 15 and stay set up all day.

Thanks to the hospital lunchtime campaign, which began Monday, 130 people had voted as of early Wednesday, Dittlinger said. Before they began this blitz, she said, they had registered 400 people to vote as they completed their goal of contacting 100 percent of the hospital&#8217;s more than 1,100 staff members.

Dittlinger pointed out that when servicemembers cast their vote, they essentially are helping choose their boss.

Rad said team members first targeted only hospital staff, but now that it&#8217;s crunch time, they are helping anyone who still wants to vote.

Lance Cpl. Steve Bourger was on the way to a medical appointment when he saw the voting team. He said he&#8217;d requested his absentee ballot from his home state of New Mexico but had yet to receive it. One of the team members sat him down and walked him through the write-in process, and five minutes later, he voted.