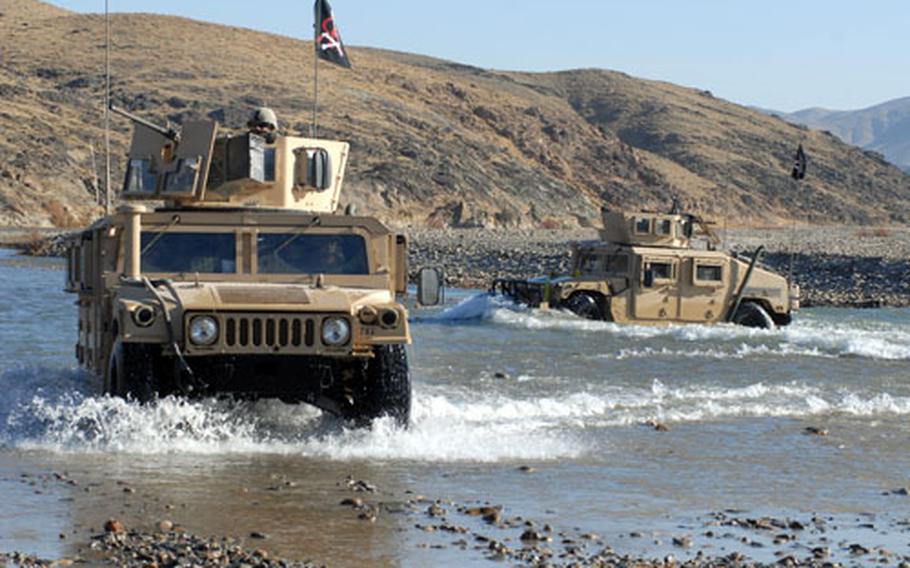 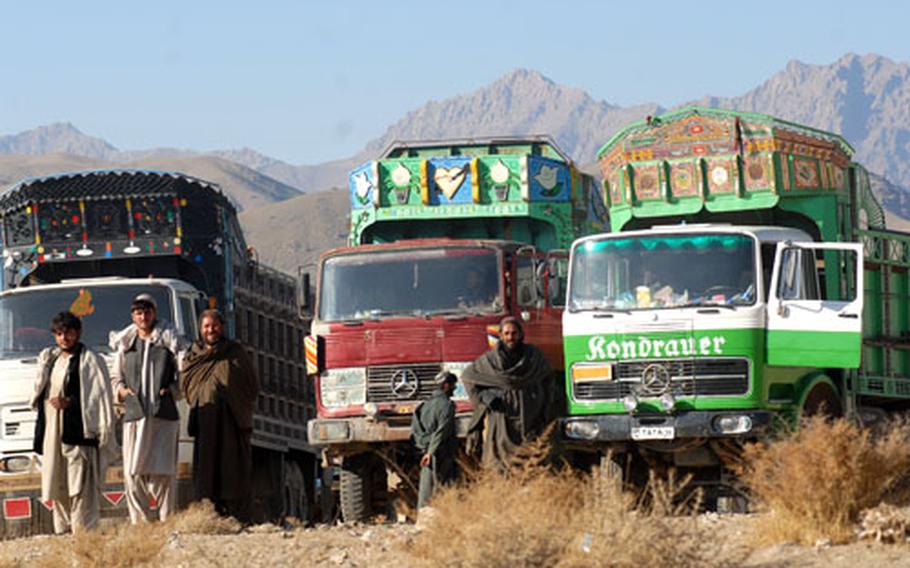 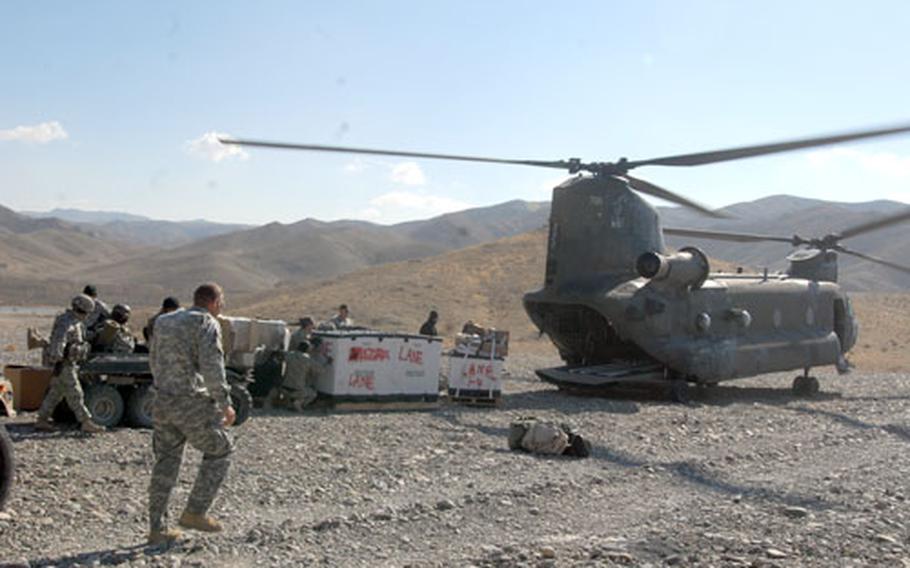 A Chinook helicopter delivers personnel and supplies to Forward Operating Base Lane in Zabul Province, Afghanistan, on Thursday. () 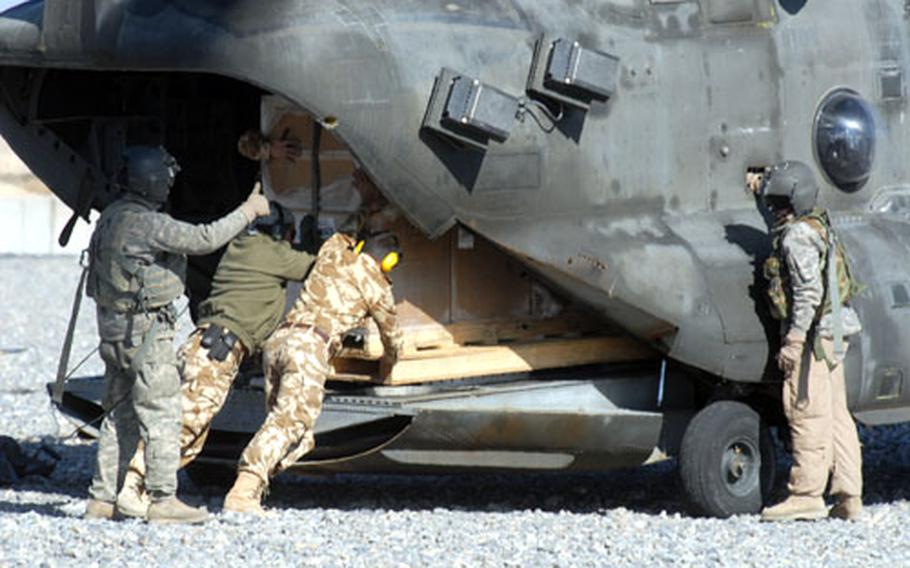 U.S. and Romanian personnel load a Chinook helicopter at Forward Operating Base Lagman with supplies for Team Apache&#39;s outer FOBs in Zabul Province, Afghanistan, on Thursday. ()

FORWARD OPERATING BASE LANE, Afghanistan &#8212; Zabul province, on Afghanistan&#8217;s porous border with Pakistan, is a land of rugged mountains and parched valleys where luckless inhabitants scratch out an existence growing almonds or throw their lot in with the Taliban for a few dollars a day.

This is the battleground for Team Apache &#8212; a company of Hohenfels, Germany-based soldiers from 1st Battalion, 4th Infantry Regiment, charged with securing three districts covering hundreds of square miles.

The soldiers, who have been in country since late July, fall under Task Force Zabul, led by the Romanian army&#8217;s 33rd Mountain Infantry Battalion. The task force fights out of Forward Operating Base Lagman in the provincial capital of Qalat &#8212; a city of 10,000 people &#8212; and secures Highway 1, the main road linking Kabul to Kandahar.

Lagman, also home to a U.S. provincial reconstruction team, sits on a hill overlooking Qalat. On another hill stands an ancient fortification that locals call Alexander&#8217;s Castle, a reference to Alexander the Great, the Greek conqueror who founded the nearest large city, Kandahar, in 330 B.C.

Members of the 1-4&#8217;s Headquarters Platoon here and at Kandahar spend days and nights loading and unloading Chinook and Black Hawk helicopters with ammunition, food, water and building materials to supply the unit&#8217;s three outer FOBs &#8212; Lane, in Arghandab District; Mizan, in Mizan District; and Baylough, in Dey Chopan District.

Each district has a distinctive climate and landscape. At Lane, the terrain is dominated by the Arghandab River, which can be perilous to vehicles attempting to cross it. The land around Mizan is more conducive to motorized patrols. But at Baylough, at 8,000 feet, soldiers cling to the snowy mountainside during foot patrols, according to Team Apache&#8217;s commander, Capt. Pongpat Piluek, 33, of Plant City, Fla.

Capt. Keith Wei, 25, of San Francisco, who oversees 1-4&#8217;s Kandahar operation, said ground convoys of Afghan trucks must traverse dirt tracks and riverbeds to get to the outer FOBs, 25 to 35 miles from Qalat, which is about 65 miles from Kandahar.

So far, nine members of Team Apache have been wounded and three vehicles destroyed by bombs.

From the air, Zabul looks like an endless expanse of mud that some giant has molded into jagged, snowcapped peaks or, occasionally, a house or farm. Shepherds herd goats that graze on the sparse vegetation, and camel trains carry goods to market while the Kuchee &#8212; nomadic tribesmen &#8212; camp in tents beside rivers.

Perched at the foot of a jagged mountain overlooking the valley of the Arghandab River, FOB Lane looks a little like Mount Everest Base Camp.

There&#8217;s not much to see on the post, a collection of dirt-filled barriers, mortar pits, CONEXes, plywood buildings and tents that are home to Team Apache&#8217;s 3rd Platoon, the 3rd Special Forces Group and a platoon of Afghan National Army troops overseen by U.S. embedded tactical trainers.

The land in Zabul is not fertile, said Piluek, who is based at Lane. Locals grow almonds and pomegranates to sell at the market in Qalat, but the profit margins are low. There are reports of poppy farming in the Mizan District, but fighting the drug trade is not easy since cracking down on growers could drive them into the arms of the Taliban, he said.

Some people in Team Apache&#8217;s area of operations have ties to the Taliban that go back to the war against the Soviets in the 1980s, Piluek said.

Finding the Taliban before they find you is not easy in Zabul. Most don&#8217;t wear uniforms and blend in with the local population when they are not fighting, he said.

The Taliban members detained by Team Apache are mostly poor, desperate or uneducated. The average person in Zabul works for $1 to $2 a day, Piluek said.

The small size of Team Apache means Piluek&#8217;s focus is on disrupting enemy activity and showing locals there is an International Security Assistance Force presence in the area to support the Afghan government, he said.

&#8220;Zabul is one of the most poverty stricken provinces in Afghanistan,&#8221; Piluek said. &#8220;In the past they have been neglected by central government. As we build legitimacy for the government, people will start to realize there is an alternative to supporting the Taliban.&#8221;