Teachers, students pushed through the 2003-04 school year with good marks 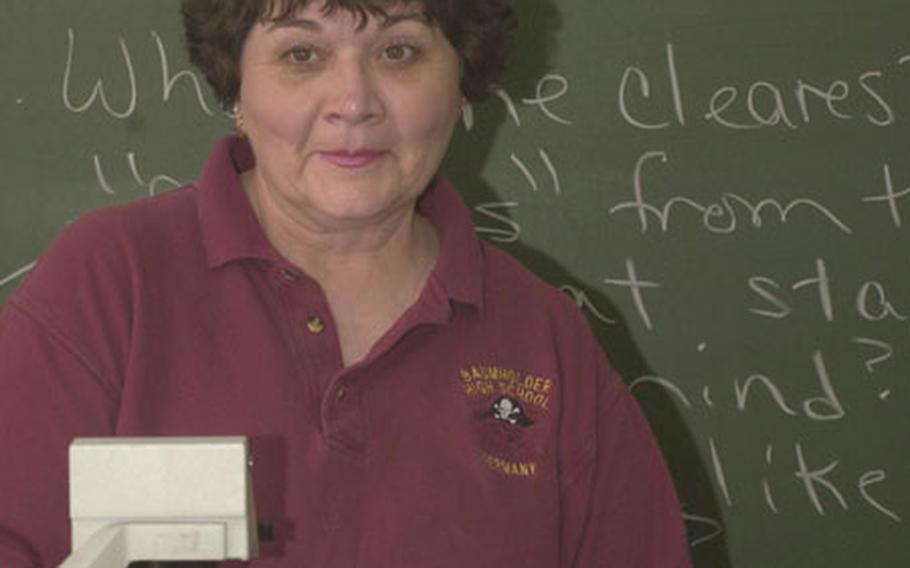 The 2003-04 school year was tough and emotional, says Joy Magowan, a senior literature teacher at Baumholder High School. But parents and students say Magowan and other teachers held schools together while troops were deployed. (Terry Boyd / S&S)

BAUMHOLDER, Germany &#8212; In Baumholder, where 98 percent of students had a parent deployed to Iraq with the 1st Armored Division, the 2003-04 school year could have been a disaster.

Reflecting back as a new term begins, those who experienced it chose the word &#8220;tough&#8221; over and over again to describe what that school year was like.

The death &#8220;had an effect on all the kids,&#8221; said Brown, whose own husband, Sgt. Nelson Brown, was deployed with Company C, 1st Battalion, 6th Infantry Regiment.

On April 28, eight 4-27 soldiers were killed by a suicide car bomber in Baghdad, the single greatest loss of life for the division during 15 months in Iraq.

On the more prosaic side, many parents were not around to help their children with schoolwork.

Sgt. Robert Morris said his daughter Katherine, 9, a fourth-grader at Smith Elementary, struggled while he was gone. While he was in Iraq with the 40th Engineer (Combat) Battalion, his German wife Rosemarie &#8212; uncomfortable in English &#8212; had difficulty helping their daughter with her homework.

It was, in short, &#8220;a tough, emotional year,&#8221; said Joy Magowan, a senior English literature teacher and senior adviser at Baumholder High School. It could have been an academic disaster, with students too distracted &#8212; even depressed &#8212; to learn.

More than a dozen people &#8212; teachers, students, parents and administrators &#8212; interviewed said school proceeded as normally as could be expected considering the situation.

Detentions didn&#8217;t rise, and grades and test scores didn&#8217;t drop. Though Terra Nova scores fluctuated at Baumholder schools, there were no clear trends. Verbal SAT scores at Baumholder were the same from 2002 to 2003 &#8212; which would have included the 1st AD&#8217;s departure &#8212; though math scores fell dramatically.

The number of high school expulsions and suspensions actually dropped to 153 for the year ending last June from 175 during 2002-03, said Candace Ransing, deputy director of Department of Defense Dependents Schools-Europe.

There were slight drops in attendance at the beginning of the deployment, then when the division was extended for 90 days, said Dom Calabria, Baumholder principal.

District accreditation teams went to schools where troops were deployed &#8220;expecting the worst &#8230; kids crying in the hallways&#8221; and frantic teachers, Calabria said. Instead, Baumholder and nearby Neubr&#252;cke Elementary received exceptional ratings.

Teachers, parents and students offered myriad explanations why the system worked, from the resilience of military children to extraordinary efforts by teachers and school administrators, to DODDS deployment programs instituted since the first Gulf War.

&#8220;With everything else in their lives turned upside down,&#8221; school routines imparted a sense of normalcy that helped students cope, said Frank O&#8217;Gara, DODDS spokesman.

Martha Sommer, a fourth-grade teacher at Neubr&#252;cke Elementary, says she saw a big difference between the 1991 Gulf War, when she was a teacher at Ansbach Elementary, and the 2003-04 school year.

Twelve years ago, it &#8220;was horrible,&#8221; she said. There was no Internet. No easy way for families to stay connected during deployments, Sommer said.

And because it had been so long since a major deployment, many spouses had no idea their soldiers could really go to war, she said.

To a great extent, mothers had children back on track before school resumed, Sommer said. Teachers talked about the extension, then went on with lessons, she said.

This time around, the deployment was woven into nearly every school day, which teachers said diffused the tension.

Sherry Brooks, who teaches at Neubr&#252;cke, had her English as a Second Language students writing letters to soldiers. Students put together packages for soldiers and for Iraqi kids, and wrote letters to single soldiers, she said. A Neubr&#252;cke counselor held daily lunch talks for students coping with parents being away.

Weaving the war into the class day help students move on to work, Brooks and Sommer said.

Teachers &#8220;let kids vent,&#8221; senior English literature teacher Magowan said. They queried students at the beginning of the day as to how things were going. Those, like her, who opposed the war, consciously kept their personal feelings out of their teaching.

Still, teachers were emotionally tested along with students, she said.

Magowan recalls the look in the eyes of a ninth-grader whose father was injured in an attack that killed a number of other soldiers. &#8220;It was a look of pure relief of having him safe at home. He was so lucky,&#8221; she said.

With her own husband, Capt. Steve Nguyen deployed, Baumholder High math teacher Trinh Nguyen and her students went through the same highs and lows.

The natural impulse is to reassure students, but teachers can&#8217;t tell them anything but the truth, Magowan said.

Magowan and others said a core reason schools didn&#8217;t falter was the students themselves. She describes children from military families as more resilient, &#8220;braver and tougher&#8221; than their counterparts at civilians schools.

During the 15 months the 1st AD was in Iraq, children back home grew up fast.

At her house, the Baumholder varsity cheerleader said, &#8220;the philosophy is grades, grades, grades. You can&#8217;t do anything in life without and education.&#8221;

Parents are unanimous that teachers and administrators carried much of the burden at Baumholder High.

&#8220;They were awesome for the whole 15 months,&#8221; said Vickie Morgan. &#8220;They stayed on kids to graduate,&#8221; she said, adding that teachers went out their way to help stressed students and parents, even picking up homework assignments.

Baumholder High counselor Shirley Lips, Calabria and Magowan &#8220;were like a second set of parents to these kids,&#8221; Morgan said.

She doesn&#8217;t expect the same level of school support as the family prepares for a stateside assignment, and is sad to be leaving soon.

BAUMHOLDER, Germany &#8212; The first day of school last year, math teacher Trinh Nguyen asked her eighth-graders at Baumholder High School, &#8220;How many of you have a mom or dad downrange?&#8221;

Nguyen, 30, is one of the rare Department of Defense Dependent Schools teachers married to a soldier.

Her students with deployed parents at this 2nd Brigade and Division Artillery headquarters &#8220;were more like sons and daughters, not just students,&#8221; Nguyen said. Yet, as much as she sympathized and empathized with her charges, she stressed that she never lowered her classroom expectations.

And like her students, she had to sometimes steel herself against bad news.

Her husband was among the 1st AD officers and soldiers in Kuwait and on their way home last April when the news came down that the division was remaining in Iraq for a 90-day extension.

Now, she&#8217;d like to take a closer look at the effects of deployment on students.

Nguyen, who has a master&#8217;s degree in educational psychology and student assessment, is considering a post-graduate study comparing the emotional and academic development of children who experienced the deployment with those who didn&#8217;t.

&#8220;Is there a difference in responsibility? In study skills? Time management? Organizational skills? Leadership skills? Are they [children of deployed families] more rebellious?&#8221;

There&#8217;s a lot, Nguyen said, that parents can learn from these students.