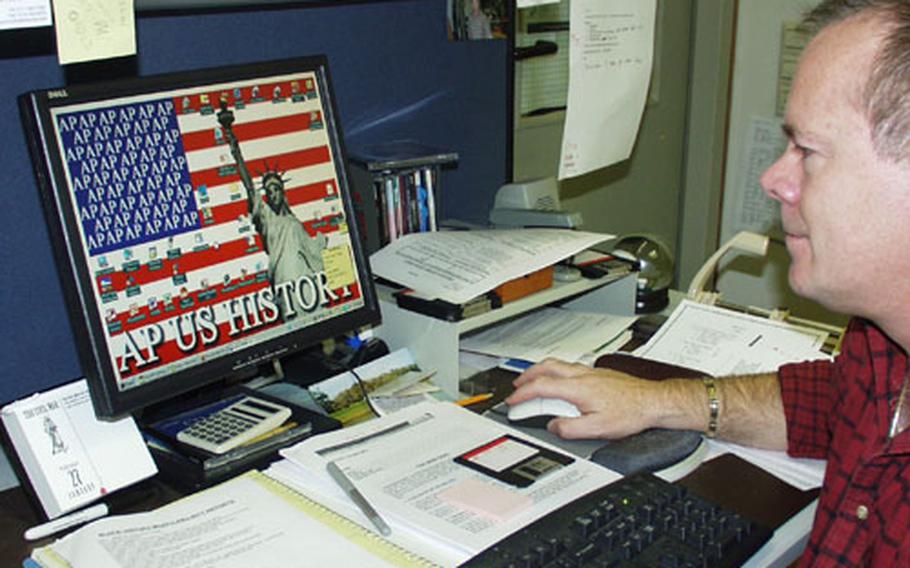 STUTTGART, Germany &#8212; Patch High School teacher Jim Heffernan, a 26-year Department of Defense Dependents Schools veteran, isn&#8217;t sure what most of his students look like.

One student is in Bahrain, another is in Ansbach, Germany, and a few more are in England. He has two from Patch, but he nearly always meets them online when they take his distance learning Advanced Placement American history class.

Heffernan is one of a growing number of DODDS teachers who teach distance learning classes.

Classes are taught via the Internet with online lectures, assignments, quizzes and tests. There is a chat program to facilitate discussions.

Sometimes proctors at students&#8217; schools will distribute exams or recorded lectures and other materials.

Distance learning classes give students in small schools or those who want to take infrequently scheduled classes, such as an Advanced Placement language or calculus course, opportunities they wouldn&#8217;t have otherwise.

The students have to be disciplined and willing to work on their own, without a teacher reminding them to turn in assignments.

Every time a student logs on for &#8220;class&#8221; at a specialized Internet site, Heffernan is able to see if a student has turned in a writing assignment, read an article or completed a quiz.

Timbrell, who taught German in Pennsylvania schools until she was hired by DODDS in January 2003, explained that in every class she had taught there were some students who would quickly raise their hands to get called on and then &#8220;zoned out&#8221; for the rest of the class.

&#8220;You can&#8217;t do that&#8221; with distance learning, said Timbrell, who works out of Boeblingen Elementary School on Panzer Casern in Stuttgart.

Every student, she said, has to participate with distance learning, and it&#8217;s harder to fall off a teacher&#8217;s radar screen.

Timbrell said she gets little one-on-one with students, but there are tools she uses to overcome that problem.

At least once a marking period, students call Timbrell using a school phone &#8212; so they don&#8217;t pay the long-distance phone charges &#8212; and have a conversation in German.

Before students can take a test, Timbrell gives the teenagers several computer-based pretests.

They need a high score on the pretests to confirm they have learned what they need before taking the actual test, a process that is easy using a computer but would be nearly impossible in a conventional classroom with pencil and paper, Timbrell said.

Students appear to be embracing the classes, although they admit they are not for every pupil.

Brandan Reed, a Patch High School junior who takes Heffernan&#8217;s Advanced Placement American history class, said the students who do the best are those who can work independently.

&#8220;Some people prefer to have the teacher giving a lecture at the front of the class, which is fine, since everybody learns in different ways,&#8221; Reed wrote in an e-mail. &#8220;I like having to read the material myself, because it&#8217;s easier for me to learn it that way. [Distance learning] classes, I think, only work for those who are diligent enough to pace their own work.&#8221;

Reed could have taken American history at Patch but couldn&#8217;t fit it into his schedule, so he&#8217;s taking it online instead.

Reed, who previously took C++ Programming I and II distance learning classes and is currently taking Advanced Placement computer science, said the big drawback is not having face time with your teacher, something he misses.

He noted that although he can ask his teachers questions with &#8220;SameTime,&#8221; a specialized Internet chat program for distance learning courses, &#8220;it&#8217;s hard to ever develop any kind of friendly connection with any teachers.&#8221;

But Reed said he learns more this way than in the conventional classroom.

Some of the pluses for him are that assignments are posted in advance; he can work ahead at school or at home so he can balance his class workload; and he can listen to music while doing his work.

&#8220;I can work longer if I listen to music. It helps fight off boredom that sometimes arises during schoolwork,&#8221; he wrote.

Heffernan agreed with those points.

Yet he misses teaching in the classroom.

Heffernan, who is also active in local community theater, would often dress up as characters from history during lectures to his classroom. He said he is considering doing that in the 10-minute lectures he records on videodisc for his students.

Distance learning is also more time intensive, although the number of students being taught is fewer.

Before coming to DODDS, Timbrell had about 100 students. Now she has 28. Still, she said, the workload is heavy.

In one marking period, she catalogued the number of assignments, quizzes, tests and other exchanges she had for her students. The number of items was 6,000.

Heffernan now has about 50 students; he normally had about 100 in his classroom.

One of distance learning&#8217;s biggest strengths is that it gives students access to courses they couldn&#8217;t take otherwise.

Not all schools have enough teachers or students to offer AP American history, but Heffernan&#8217;s class allows pupils to fit it into their schedules when they have a free period.

Timbrell said AP German, for example, may be offered at a school only during one time slot, and that time slot could conflict with another course a student wants to take.

Menwith Hill High School junior Knisha Freeman, who is in England, is one of Heffernan&#8217;s students, and she has found her first distance learning class a positive experience.

&#8220;Not having a teacher in the front of the class instructing, and having the willpower to do the work on your own and on time, makes it feel like the college class that it&#8217;s supposed to be,&#8221; Freeman wrote in an e-mail.