Teachers hope candy biz can be A Good One 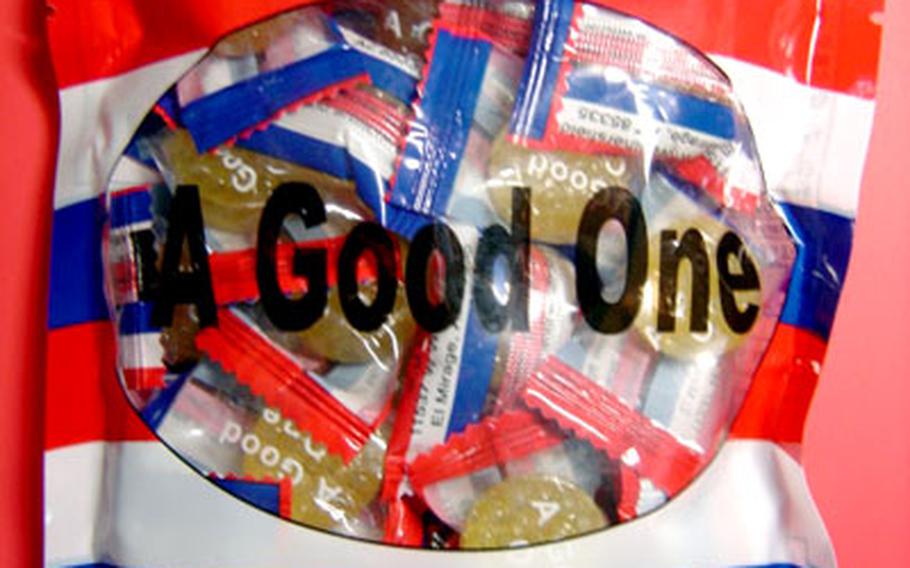 Jim and Cirila Martin, two Department of Defense Dependents Schools teachers, came up with A Good One candy. (Courtesy of Jim Martin)

They hope people will buy it.

The couple, both teachers at Defense Department schools in Germany, have started a company selling a hard candy named after the oft-used and ambiguous American farewell phrase.

Jim Martin, who teaches at Ramstein Intermediate School, came up with the idea one day after hearing the phrase from a gate guard while passing through Sembach Annex near Kaiserslautern.

He wondered: What does that saying actually mean?

He and his wife, a third-grade teacher at Landstuhl Elementary School, poured $60,000 of their own money into getting the business started over the last two years and got a trademark for the name.

The family, which also sells Christian-themed baby blankets and pillows, came up with a design for the candy. The candy, blankets and pillows are sold through JCM Products, a company formed by the Martins and run by two of their children and son-in-law.

The hard fruit candy comes in strawberry, cherry, raspberry, grape, orange, lemon and apple and is wrapped individually in a red, white and blue package.

The Martins have tried to peddle the candy from their summer home in El Mirage, Ariz., to casinos and hotels. On their Web site, customers may buy a minimum of 10 bags of candy for $1.50 per bag.

So far, nobody is biting.

Martin has also tried to get organizations such as the Arizona Diamondbacks to give the candy away at game, but he is still waiting to see if the club is sweet on the idea. In the meantime, the Martins&#8217; Arizona home is packed with more than 43,000 bags of candy.

The retired Air Force master sergeant said he would like to send 15,000 bags of the candy to troops in Iraq. He is looking for a sponsor to help pay the shipping costs.

They could certainly use A Good One, he said.