Teachers get guidance on mixing technology and education 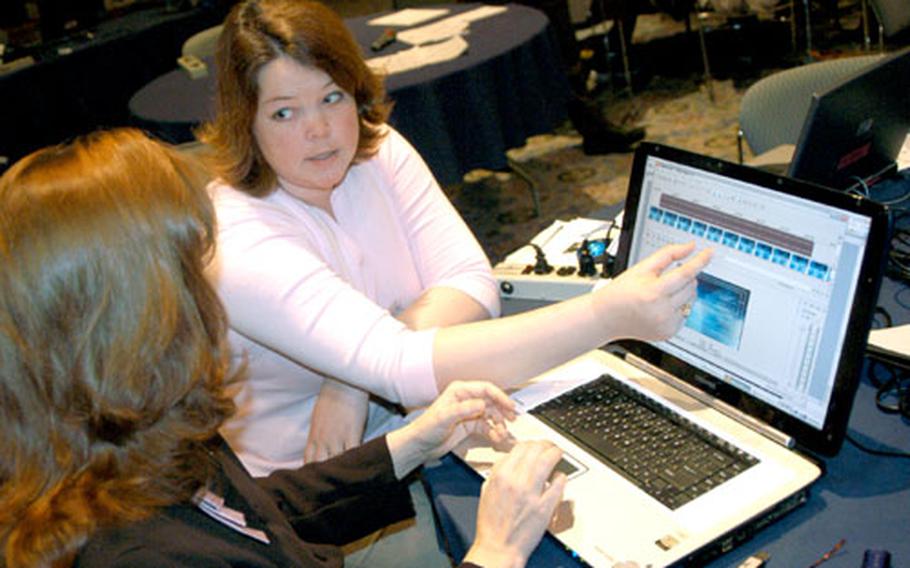 Christy Zander, who teaches at M.C. Perry Elementary School at Marine Corps Air Station Iwakuni, talks to Lorri Blanchard, front, about a project she is creating to help students learn science using video technology. The project and other ideas came about through the Teacher Far East Technology Conference last week at the New Sanno Hotel in Tokyo. (Juliana Gittler / S&S)

Christy Zander, who teaches at M.C. Perry Elementary School at Marine Corps Air Station Iwakuni, talks to Lorri Blanchard, front, about a project she is creating to help students learn science using video technology. The project and other ideas came about through the Teacher Far East Technology Conference last week at the New Sanno Hotel in Tokyo. (Juliana Gittler / S&S) Among them will be the anglerfish, who will conveniently float by on cue. A few visitors from the film &#8220;Finding Nemo&#8221; might also stop by while &#8220;Jaws&#8221; music plays over the closing credits.

Sound too cool for school?

Not anymore. Thanks to a new software program, collaboration between school officials at M.C. Perry Elementary School and inspiration from a weeklong seminar, the production will help Christy Zander&#8217;s students understand the concept of organisms adapting to their environment.

More than 50 educators from 11 base schools across the Pacific spent last week at the New Sanno Hotel in Tokyo learning how to infuse technology and information literacy into their curriculums.

The conference, one of four this semester, helps teachers keep up with technology children experience in their daily lives. It brought together two teachers, a principal, an education technologist and an information specialist &#8212; formerly called librarian &#8212; from schools in each Pacific district to study ways to bring technology into all classes.

Rather than a few experts teaching to a room of teachers as in the past, the small teams from each school learn to work as a team, he said.

As Zander comes up with an idea, information specialist Diane Dill can add research suggestions from the library and educational technologist Lorri Blanchard can suggest new video or software tools to help.

Zander can share the ideas with other teachers, including Wendy Funk, a third-grade teacher also from the M.C. Perry team.

The teams plan ideas together, then share them with other school teams at the conference. They&#8217;ll return to their own schools to spread the ideas to other teachers and schools using online information sharing programs, Hendryx said.

Kim Simpson, a second-grade teacher from Andersen Elementary School on Guam, taught others to make an interactive Jeopardy!-style game to help students develop questions and answers on a topic. She is learning not only from her fellow Andersen team members but from all the participants.

At Humphreys American Elementary School at Camp Humphreys, South Korea, first-grade students in Jared Collins&#8217; class will grow plants. While that&#8217;s not new for biology classes, his students will then take photos of the plant growth stages and with narration, form them into a visual presentation that can be shared, he said.

The conference helped Collins and his team, including education technologist Chad Jimison, find time to sit down and create projects like the plant one.

A key goal of the conference, besides bringing everyone together and giving them time for curriculum-building, is making education more relevant to modern students.

&#8220;Kids are now so engrossed in video technology, and iPods, and cell phones and immediate feedback,&#8221; Blanchard said. By providing education using the tools they love, like technology, &#8220;they do not even realize they&#8217;re learning.&#8221;

Said Hendryx: &#8220;The technology is there, not as a baby sitter, but to enhance the learning. The curriculum is the key point. We&#8217;re not trying to teach technology over curriculum.&#8221;