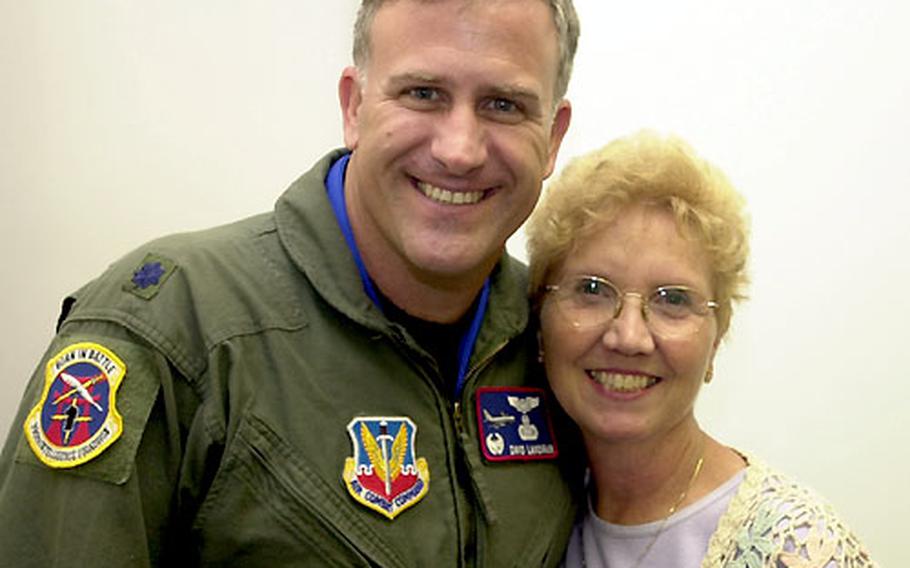 At a change-of-command ceremony here earlier this year, the 390th Intelligence Squadron commander singled out his first-grade teacher, Ellie Schmidt, for being one of the most positive influences in his life.

If you want to live to the fullest, you must give back to your community and make a difference in someone&#8217;s life.

She says many students never stop to tell a teacher how he or she has made a difference. But Landfair never lets her forget.

&#8220;Miss Ellie,&#8221; as he still calls her, is now a Kadena Middle School counselor. But Landfair first knew her in 1968 when his father, retired Navy Capt. Bob Landfair, was stationed in the Philippines.

As with almost all military families, Landfair&#8217;s father was transferred and the family moved &#8212; as did Schmidt.

But throughout the years, she and the Landfairs periodically came into contact. And in 1998, Pat Landfair told Schmidt her son was on his way to Osan Air Base, South Korea, where Schmidt was teaching.

David, now an adult, had joined the Air Force.

The reunion there was short-lived as Schmidt again moved, this time to E.C. Killin Elementary School on Okinawa.

Earlier this year, David was transferred to Kadena. When his change of command was held a month early, his wife, Marie, and daughters Kasey and Samantha couldn&#8217;t attend &#8212; so Schmidt acted as his &#8220;family&#8221; at the ceremony.

It was there that Landfair publicly expressed his gratitude for his former teacher.

That&#8217;s when he introduced the crowd to Schmidt and gave her the recognition he said she deserves.

But she deflected the credit to Landfair.

Landfair said he occasionally looks to Schmidt for parenting help.

Schmidt keeps a reminder on her wall of the bond formed with her former student.

On a sheet of paper are two photos: One is of the two of them hugging at Landfair&#8217;s change-of-command ceremony; the other is a copy of his first-grade photo.

Written on the sheet: