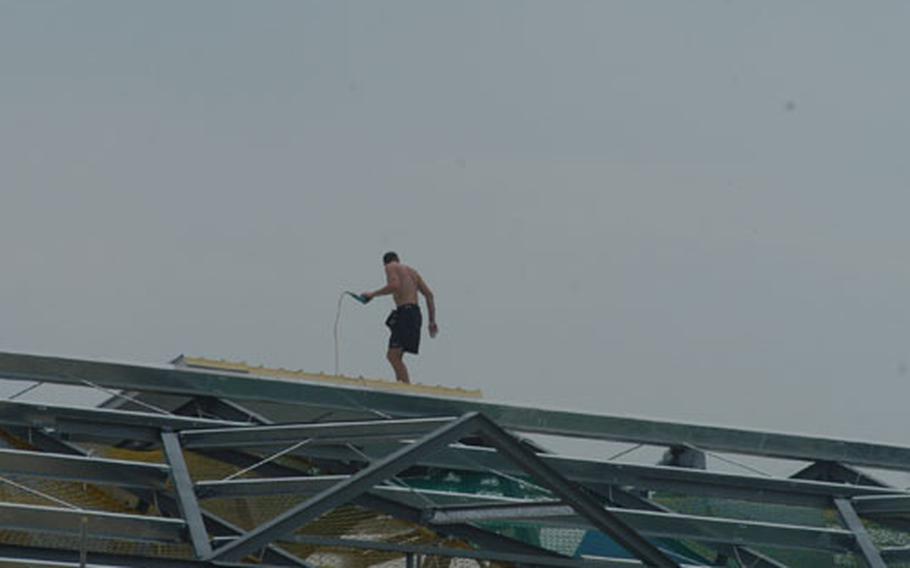 A worker stands atop the frame of the new middle school at RAF Feltwell, England. A teacher has filed a complaint with the inspector general, charging the school does not conform with modern architecture for a middle school. (Ron Jensen / S&S)

RAF FELTWELL, England &#8212; Is the new building under construction here a junior high or a middle school?

Administrators say it is a middle school.

Greg Klaes, a science teacher, claims it is a junior high.

He feels so strongly about it that he filed a fraud, waste and abuse complaint with the inspector general, saying the school being built for $21 million will be obsolete the day it opens for the start of the school year in 2004.

At the core of the disagreement is the differing philosophy between junior high education and middle school education and how architecture can accommodate the philosophy.

&#8220;Middle schools should have interconnecting doors between classrooms and walls that fold back so you can put classrooms together and teachers can team-teach,&#8221; Klaes said.

That was the biggest fault of several that Klaes mentioned in his complaint filed in June at RAF Lakenheath. He also said the rectangular shapes of the rooms limit the arrangement of the room, which is important for middle schoolers.

Also, he said, the classrooms are not grouped around a resource room readily available for teachers.

School administrators would not discuss the charges directly, but they did talk generally about the new building. Their comments made it clear they disagree with the teacher&#8217;s complaint.

Linda Curtis, superintendent of the Isles District of the Department of Defense Dependents Schools, and Jannett Klinke, the school principal, both said the new school adheres to the middle school philosophy and will be an excellent aid to pupils and staff when it opens.

Klaes charges the school being built is a junior high, not a middle school.

The difference may escape the layman, but it addresses a philosophical change in education that dates to the 1960s.

Children from ages 11 to 14 are going through many changes, said Sue Swaim, executive director of the National Middle School Association in Ohio.

That idea is nothing new. In fact, it forged the development of junior high education about 120 years ago, she said. But after several decades, junior highs &#8220;began to lose sight of what their original mission was,&#8221; she said.

So the middle school concept took root in the 1960s as a way of educating children in that challenging age group.

&#8220;There are specific things we know about educating them that are successful,&#8221; Swaim said.

The middle school philosophy involves an integrated curriculum taught by teams of teachers, meaning a particular topic, such as the settlement of the American colonies, is maintained throughout each class, from history to math to science.

Also, teachers have the freedom to form smaller groups or larger groups, as they see the need.

Swaim said it is important to have flexible space so teachers can make those changes. In that, she said, Klaes is correct in his complaint about the lack of folding walls.

&#8220;In our school, we did have flexible walls. Sometimes they were open, sometimes they were closed,&#8221; she said, referring to a school where she previously taught. &#8220;That enhances that concept of developing smaller communities of learners.&#8221;

Swaim said 23,000 schools in America are called middle schools, compared with only 900 that are referred to as junior highs. That&#8217;s only the name above the door, however. Many middle schools are using the more rigid junior high approach, which resembles a high school.

Kevin Sullivan, who has spent 30 years designing schools for St. Paul, Minn.-based architecture firm of Wold Architects and Engineers, said the architects were slow to catch up with the new philosophy.

Only about 10 years ago, he said, architects began designing middle schools in a way that would make it easier for teachers to teach in teams and to adjust the sizes of pupil groups, making them larger or smaller as the teachers desired. In short, the architecture took into account the educational philosophy.

A middle school design will include a cluster of classrooms suitable for team teaching.

He said the architecture helps break down the student body into &#8220;houses,&#8221; with pupils doing all of their learning within a particular house. Others refer to it as &#8220;schools within a school.&#8221;

Sullivan was reluctant to comment on the design of the school at RAF Feltwell without seeing the plans, but he did say the lack of flexibility in the classroom did sound more like a junior high than a middle school. Even so, he said, that doesn&#8217;t mean the building can&#8217;t function as a middle school.

Curtis and Klinke stand behind the design of the school.

The pods will have six rooms each and are the &#8220;houses&#8221; that Sullivan mentioned. The pods have three classrooms on each side of a dividing corridor. They will lend themselves to team teaching.

Klinke dismissed the lack of flexible walls between classrooms, saying they are too noisy.

Plus, she said, each room will have an interactive board for presentations and the walls will all be fitted with connections for computers. A flexible wall would disrupt that.

An extra room in each pod will be available for the teaching teams to use as they see fit.

Curtis said the new school will provide a suitable transition from the motherly love of elementary school to the increased responsibility expected from high school students, which is the point of middle school education.

Klaes, too, said the building will suffice, but a better one should have been built.

&#8220;Middle schools are moderately more expensive, but the research indicates middle schools are loads more effective,&#8221; he said. &#8220;The school out there is all right. But in terms of what we could have had, we got robbed.&#8221;