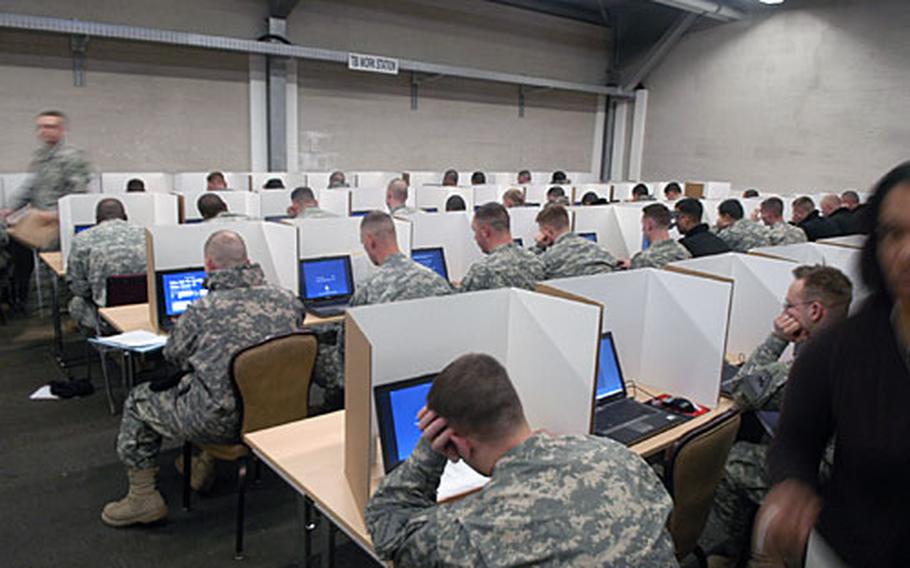 Nearly 4,000 soldiers from the 1st Armored Division, 2nd Brigade are having their short-term memory and basic problem solving abilities tested before deploying to Iraq. The test gives doctors something to compare with after the deployment. The test is intended to help diagnose instances of mild traumatic brain injury, which is common among deployed soldiers. (John Vandiver / S&S)

BAUMHOLDER, Germany &#8212; The soldiers meandered through the old warehouse by the hundreds, moving from stall to stall to make sure their affairs are in order before deploying to Iraq this spring.

Just like any other pre-deployment processing, the soldiers went through the ritual of getting vaccinations updated, wills completed and photos taken.

But for the roughly 4,000 soldiers of the 2nd Brigade, 1st Armored Division, the checklist included something new: a cognitive test that will help diagnose if a soldier is suffering from mild traumatic brain injury (TBI).

&#8220;It&#8217;s a pre-deployment baseline,&#8221; said Robert E. Schlegel, a researcher with the University of Oklahoma whose team was in Baumholder last week conducting the tests for the Army.

The concept is to get an assessment of a soldier&#8217;s cognitive functioning before deployment.

&#8220;So in the event of exposure to an IED or other types of blasts, there is a basis of comparison between their cognitive functioning prior to deployment versus right after the injury or during the re-deployment reintegration,&#8221; Schlegel said.

Up to 20 percent of troops exposed to combat in Iraq and Afghanistan may have suffered a mild traumatic brain injury at some point during their deployment, according to an Army study released earlier this month.

TBI, which has proved difficult to diagnose and treat, could be described as the signature deployment injury. As a result, soldiers are increasingly being screened before heading downrange.

Schlegel sad the test is on its way to becoming a requirement.

His team performed the baseline tests in Wiesbaden for the 1st Armored Division&#8217;s recent deployment. But the Baumholder group is the first full-sized brigade in U.S. Army Europe to receive the testing.

Capt. Joseph May, the brigade surgeon for the Baumholder unit, said the test means his team of doctors will be more effective at diagnosing and treating soldiers in the field.

The concept of the baseline test is to get an assessment of soldier&#8217;s memory and spatial processing abilities and measure response times to various questions. With a click of the mouse, soldiers react to different words, respond to various memory challenges and work through puzzles.

Schlegel&#8217;s team from the University of Oklahoma&#8217;s Center for the Study of Human Operator Performance first conducted large-scale TBI baseline tests last year with the soldiers of the 101st Airborne Division.

Currently, all 101st deployed soldiers have been tested, he said.

Though the baseline test and subsequent follow-up test are not a final diagnosis, they give doctors a quick and revealing glimpse at what is happening cognitively, Schlegel said.

In the past, there was more of a reliance on questionnaires and self-report surveys, he said.