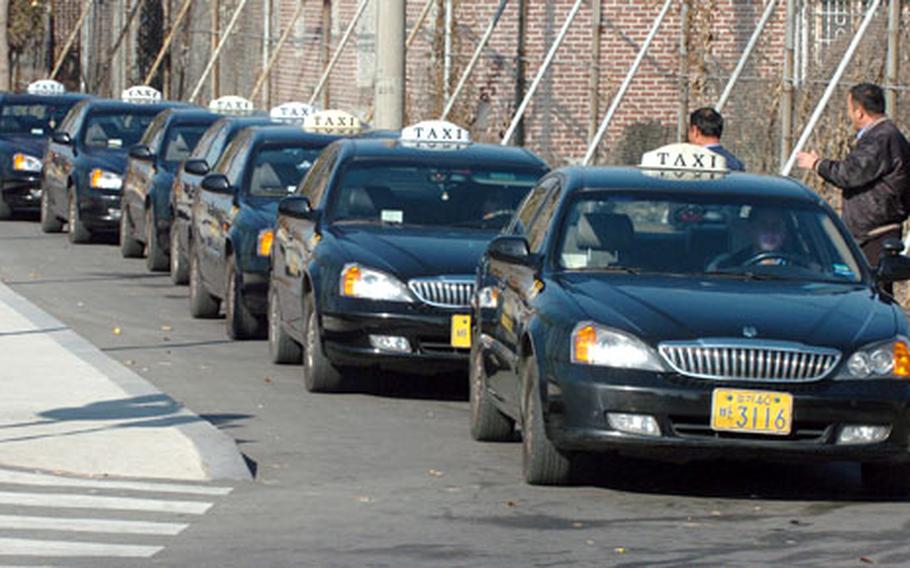 Taxis will be banned from operating at Camp Humphreys on Monday so drivers can attend a training session. (Courtesy of U.S. Army)

PYEONGTAEK, South Korea &#8212; Taxis will be banned Monday from operating at Camp Humphreys so drivers can attend a training session, officials said.

The safety &#8220;stand-down&#8221; will be in effect from midnight Sunday to midnight Monday.

Army Col. Michael J. Taliento Jr. said he ordered the one-day taxi ban because of recurring complaints of hazardous driving practices by some of the post&#8217;s 80 or so taxi drivers. Reminding drivers about winter safety hazards also is an aim, he said. Taliento is commander of the Area III Support Activity at Camp Humphreys, which is in Pyeongtaek.

Those on post who might normally use a taxi will have to find other means of getting around &#8212; using the post&#8217;s shuttle bus service, carpooling, bicycling or walking &#8212; officials said.

Taxis from nearby Osan Air Base also will be forbidden entry to Camp Humphreys during the stand-down, Neeley said.

Taliento said the command &#8220;routinely&#8221; receives reports including &#8220;speeding off post, on post &#8230; taxi drivers not slowing down, not observing proper passing techniques going around formations of troops.&#8221;

Some of those complaints have been from unit first sergeants and first-line supervisors. Complaints also have surfaced at Camp Humphreys&#8217; quarterly town hall meetings, and Taliento said he twice recently witnessed &#8220;taxi drivers driving excessively fast in the downtown area&#8221; of post.

Monday&#8217;s training will be in two four-hour sessions inside the Community Activities Center.

Neeley said members of the Area III provost marshal&#8217;s office at Camp Humphreys will review the past year&#8217;s traffic offenses and remind drivers of rules and the penalties for violations.

Taliento and taxi service management will determine &#8220;what appropriate disciplinary action or further training is necessary&#8221; should a safety complaint be filed against a driver, Neeley said.

Taliento said he knows the training will cause inconvenience, especially among servicemembers in grades E-6 and below, barred by U.S. Forces Korea policy from having their own vehicles.

Drivers who complete the day&#8217;s training will get a certificate and decal to display inside their taxis.