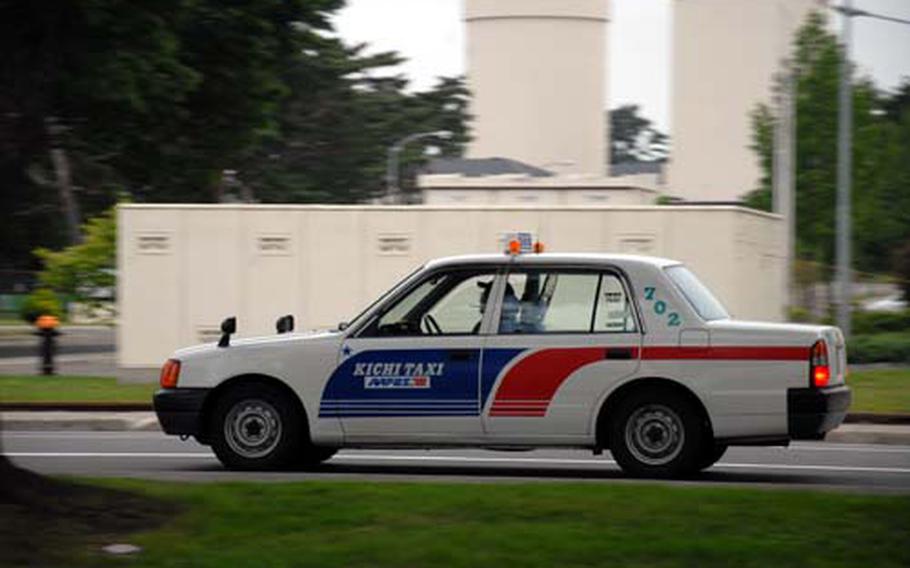 A Kichi Taxi, contracted through the Army and Air Force Exchange Service, drives through Misawa Air Base, Japan, on Tuesday. AAFES officials have worked with Kichi Taxi to provide several new services this month, including an expanded pick-up service which begins Friday. (T.D. Flack / S&S)

MISAWA AIR BASE, Japan &#8212; AAFES officials at Misawa are expanding a taxi pickup service Friday, and adding other services toward the end of the month.

Kichi Taxi &#8212; the only company contracted to provide on-base service through the Army and Air Force Exchange Service at Misawa &#8212; began offering in February what they call &#8220;daiko&#8221; service every Saturday from 8 p.m. to 3 a.m., AAFES general manager Anna Iosefo explained.

Under daiko &#8212; Japanese that translates roughly as &#8220;to do something for someone&#8221; &#8212; a taxi will arrive with two drivers, one of whom will drive your car home. It&#8217;s a popular service in Japanese communities and saves someone from getting behind the wheel if they&#8217;ve had anything alcoholic to drink. The minimum blood alcohol level at which a person can be charged with drunken driving in Japan is 0.03 percent, less than half the 0.08 percent minimum in the States.

Kichi Taxi charges the normal fare, plus a 1,000 yen fee for the service.

Beginning this week, daiko will also be available from 8 p.m. to 3 a.m. every Friday.

Those prepaid tickets will be sold for 1,500 yen in the shoppettes and in the exchange and are valid for one trip anywhere on the base. Iosefo explained that since a trip from the front gate to the north housing area can cost 2,500 yen, the golden ticket can help save customers money.

The tickets can be used Friday through Sunday. If a customer&#8217;s pickup point or destination is off base, and the total fare is more than 1,500 yen, the customer must pay the difference.

Also planned this month is the debut of &#8220;rider benefit cards.&#8221; Each time a customer rides in a taxi, the card is annotated. After the sixth trip, the customer earns a free AAFES movie or lunch.

And, Iosefo explained, pocket reference cards with taxi phone numbers are going to be made available to base residents. Kichi Taxi can be reached at DSN 616-5438 or 616-5439.

There are other Japanese companies that offer cheaper daiko service, but they aren&#8217;t authorized to bring customers on base.

Toshiyuki Onodera, of the Kotobuki daiko service in Misawa city, said his company often has American customers who want to go to their off-base homes.

Local bars and restaurants will gladly call his service for their customers, he said, though sometimes Americans who can speak some Japanese call directly.

Kotobuki charges 1,000 yen for the first 3 miles, which is about as far as most Americans live off base from the bar area outside the front gate, Onodera said.