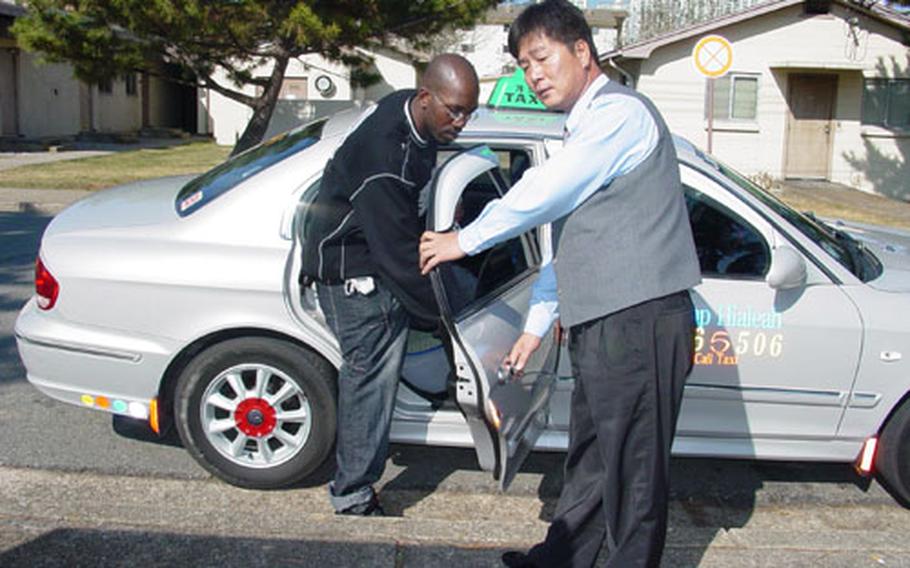 A customer departs a Camp Hialeah taxi as the driver holds the door on the first day of service at Camp Hialeah, South Korea. (Courtesy of Area IV Public Affairs)

Camp Hialeah Call Taxi debuted last week with 10 taxis and 11 drivers, who are allowed to ferry passengers to locations on- and off-base, officials said Monday.

&#8220;This will enhance the quality of life for the members of the community,&#8221; Lt. Col. Jeffrey K. Ludwig, garrison commander, said in a statement released by the Army.

Now, he said, people &#8220;en route to the installation here from the train station with baggage and people outbound for international travels&#8221; can be picked up or dropped off at their barracks or houses.

Officials said drivers are expected to respond to telephone calls from most off-post locations within 20 minutes, traffic permitting.

The cabs also have two-way radios, letting drivers tell other drivers if they see potential passengers trying to wave down a cab on the street.

The drivers are from local companies.

They understand basic English, have attended some extra language classes and have been given tours of Hialeah so they know buildings&#8217; locations, officials said.

Base officials say taxi drivers were getting up to 30 phone calls a day the first week the service was offered; 10 drivers seem to be enough to satisfy demand, they said.

&#8220;I have not received any complaints concerning taxi shortages as yet so I think 10 is just about right,&#8221; said Camp Hialeah Transportation Officer Philip Woolford.

Permanent taxi stands will be at Pusan Pub, the commissary and post exchange.

Taxi fares are calculated in accordance with standard Pusan rates, officials said, noting 1,000 won will be added to the fares of passengers calling for pick-up.