Taxi driver says he harbors no anti-U.S. feelings after attack 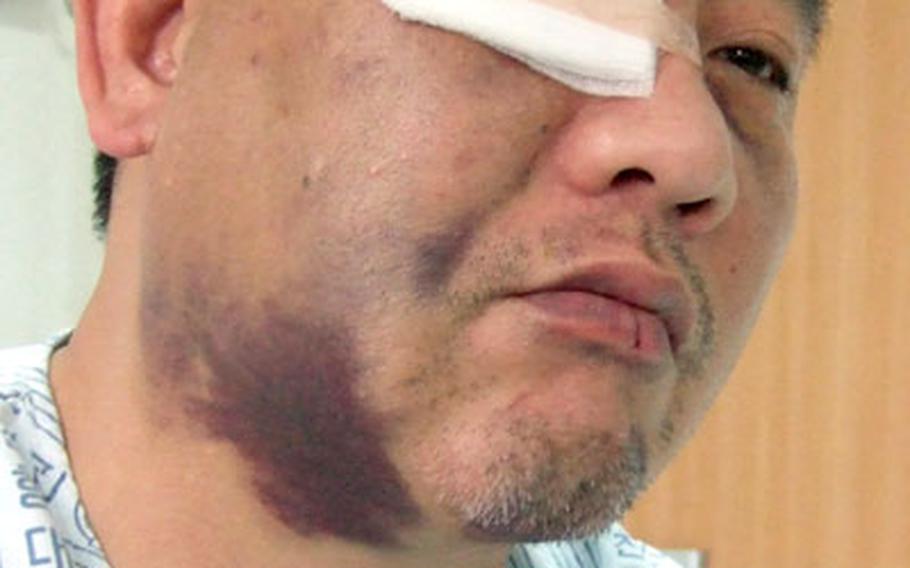 SEOUL &#8212; Taxi driver Baek Gwang-yong said the two U.S. soldiers he says brutally attacked him in a public bathroom on Nov. 17 should be brought to justice so they can&#8217;t hurt anyone else.

Baek, misidentified in earlier stories as Park, agreed to be interviewed in the hospital room where he&#8217;s recovering from an attack that left him with a ruptured eye, broken nose and broken cheekbone.

Two U.S. soldiers, 18-year-old Anthony Justin Faulkner and 20-year-old Justin Ronald Brown, were questioned in connection with the case, according to South Korean police. Police officials said they would forward the case to prosecutors, who must decide whether to charge the soldiers.

While the U.S. military would not confirm identities, officials said two soldiers belonging to a subordinate unit of the 19th Sustainment Command (Expeditionary) were under investigation.

But Baek said the soldiers are lying and that he has no clue why he was attacked.

Baek said he was standing at the urinal when one of the soldiers grabbed him from behind and pulled him off the ground in a headlock. Choking and unable to breathe, Baek said he momentarily lost consciousness.

He said he came to after being smashed into a door and dragged into a toilet stall.

Baek claims the soldiers repeatedly punched and kicked him as he lay on the bathroom floor covered in blood. An older woman who heard the commotion entered the bathroom but immediately ran out the door, Baek said.

He said the soldiers ran after the woman but fled toward nearby Yongsan Garrison after they encountered a group of South Koreans on the sidewalk.

Baek, who often has U.S. military troops as customers, said the incident hasn&#8217;t left him with any anti-American sentiment.

The driver and his wife, Lee Kyung-mi, said an officer from the soldiers&#8217; unit visited the hospital to offer an apology.

&#8220;U.S. Army investigators will work closely with Korean authorities to ascertain all of the facts,&#8221; USFK officials stated in an e-mail last week. &#8220;The 19th ESC takes all allegations of misconduct seriously and, therefore, this investigation will receive the fullest cooperation and support.&#8221;