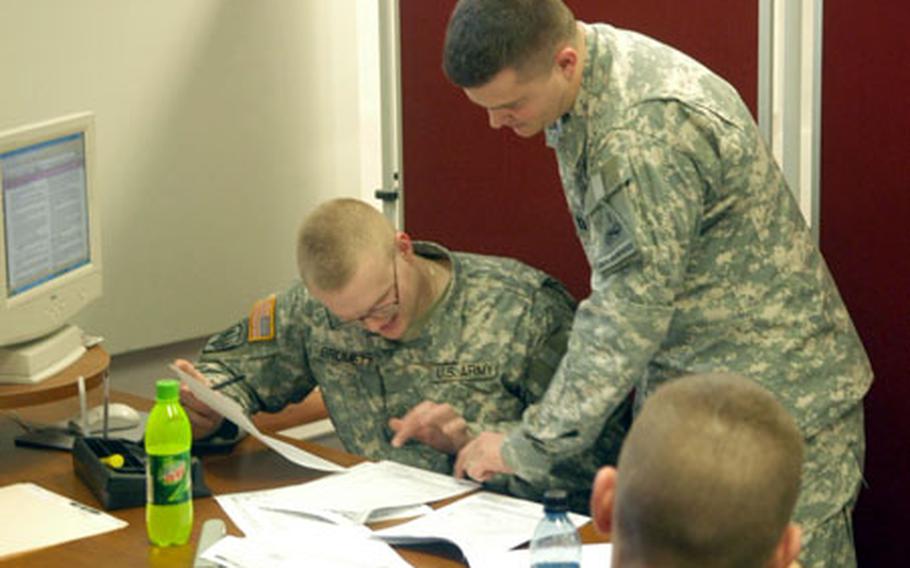 BAUMHOLDER, Germany &#8212; While watching frantic last-minute taxpayers rush to file their forms on the night of April 15, an American icon by the name of Homer Simpson was heard to remark, &#8220;Would you take a look at those morons. I filed my taxes over a year ago!&#8221;

Tax centers are popping up at installations to help make the process of getting straight with Uncle Sam go smoothly.

At Ray Barracks in Baumholder, which saw the 1st Armored Division&#8217;s 2nd Brigade come back from Iraq late last year, the pace has been fast since the local tax center opened Jan. 29, said Capt. Brad Crockett.

So far, the tax center has processed more than 730 returns for refunds totaling about $1.4 million, he said. About 330 of those filings were done in the first week of business.

Soldiers coming and going from the garrison likely accounted for the initial high tempo, he said.

Some of the younger soldiers coming in have &#8220;high expectations&#8221; on what kind of money the federal government is going to kick back, Crockett said, but deployment pay is not taxed, so a soldier that was gone for most of 2006 might not get a lot in his or her refund.

But there are caveats to that, too, he said. Soldiers with families can get bigger refunds by taking advantage of child credits and earned income tax credits.

This can lead to befuddlement among the younger and single soldier set, Crockett said.

In addition to a June 15 deadline for overseas American tax filings, deployed personnel get a 180-day extension from when they leave the combat zone, he said.

Taxpayers also need to make sure they&#8217;re current with their state-of-residence tax regulations, he said. Some clients don&#8217;t realize they may still need to pay state taxes while living in Europe.

It&#8217;s a particular problem for civilians, he said, and can result in audits or money being taken from a federal refund to pay off a state balance if ignored.

Getting ready to file at the Baumholder tax center this week, April Zanker said she and her husband, Sgt. Randolph Zanker, got a pretty good refund last year.