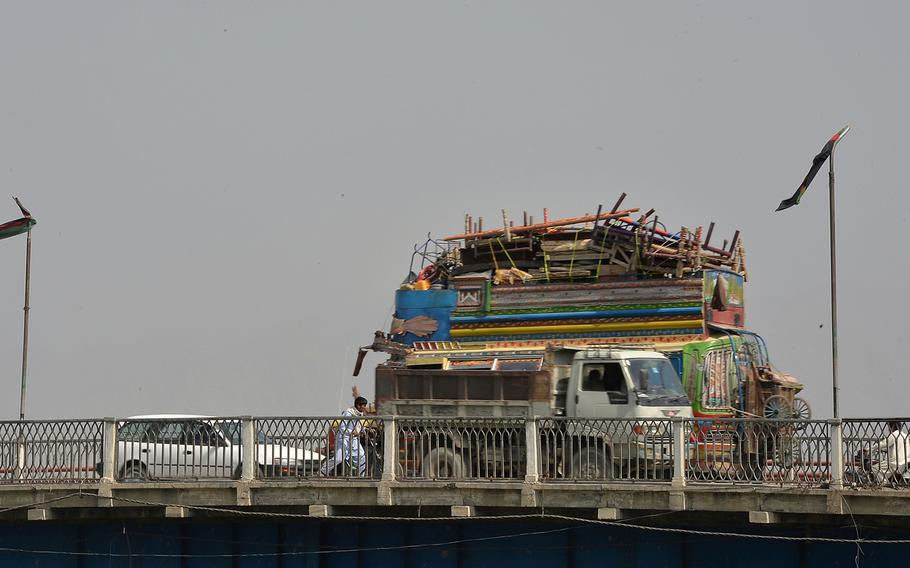 A truck laden with belongings of refugees repatriated to Afghanistan from Pakistan, crosses a bridge over the Kabul River in Jalalabad, Afghanistan, on Wednesday, Oct. 5, 2016. Nearly 370,000 refugees have returned from Pakistan so far this year. (Chad Garland/Stars and Stripes)

A truck laden with belongings of refugees repatriated to Afghanistan from Pakistan, crosses a bridge over the Kabul River in Jalalabad, Afghanistan, on Wednesday, Oct. 5, 2016. Nearly 370,000 refugees have returned from Pakistan so far this year. (Chad Garland/Stars and Stripes) 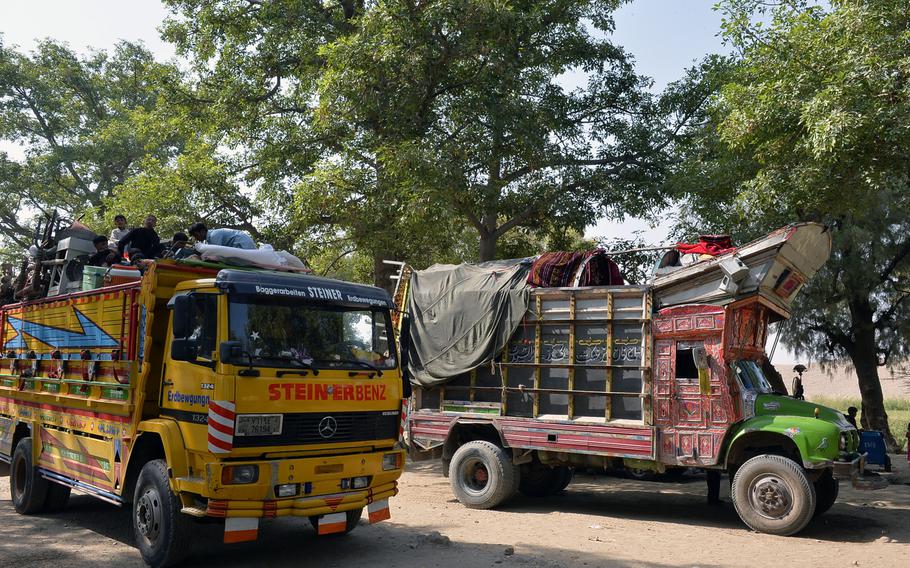 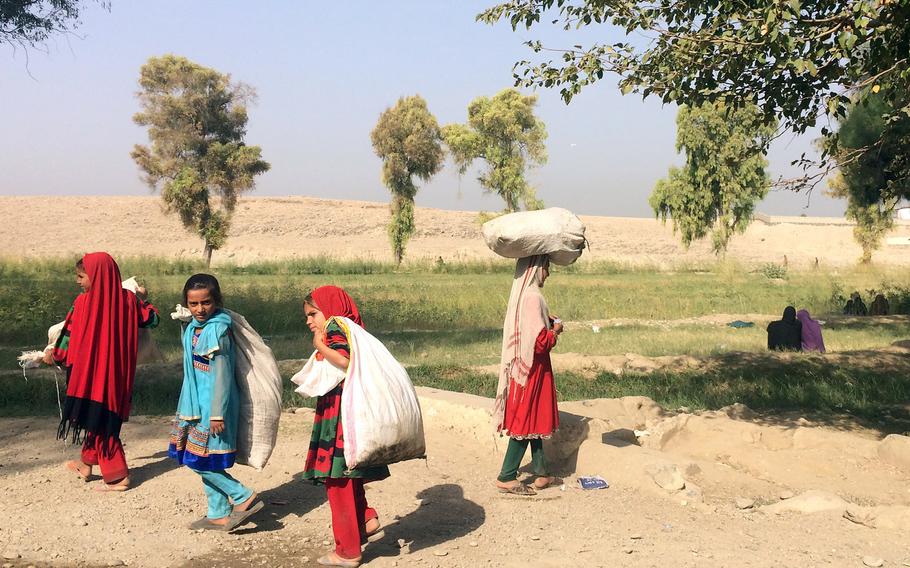 Afghan girls carry their belongings on Thursday, Oct. 6, 2016, outside the Samarkhel Encashment Center near Jalalabad in eastern Afghanistan, where thousands of Afghan refugees returning from Pakistan are registered and given cash and other assistance. (Chad Garland/Stars and Stripes) 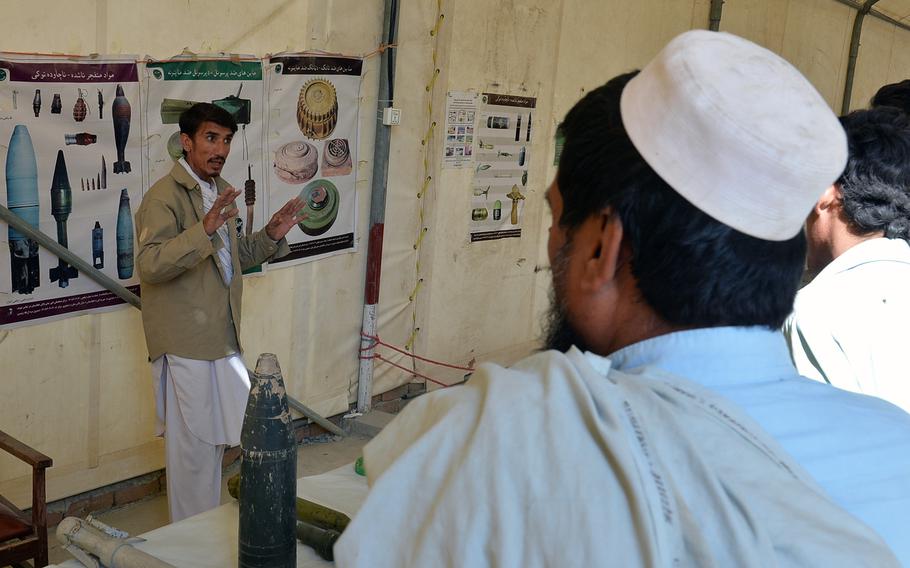 A worker at the Samarkhel Encashment Center outside Jalalabad, Afghanistan, instructs returning refugees in mine awareness on Thursday, Oct. 6, 2016. Thousands of Afghans repatriating from Pakistan are being vaccinated and given cash grants at the center operated by the U.N. and the Afghan government. (Chad Garland/Stars and Stripes) 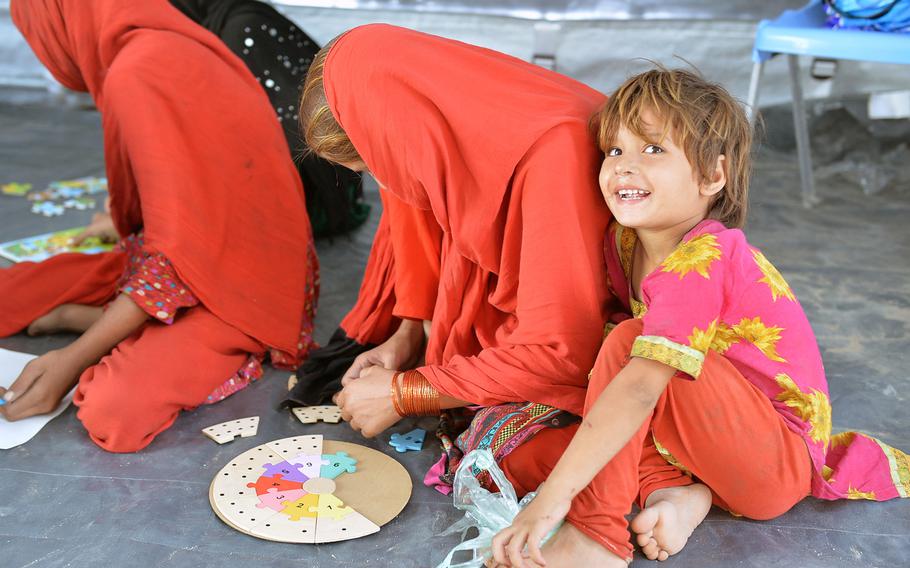 Afghan girls from families returning to Afghanistan after years of seeking refuge in Pakistan, play games in a UNICEF-sponsored tent at the Samarkhel Encashment Center near Jalalabad, Afghanistan, on Thursday, Oct. 6, 2016. (Chad Garland/Stars and Stripes) 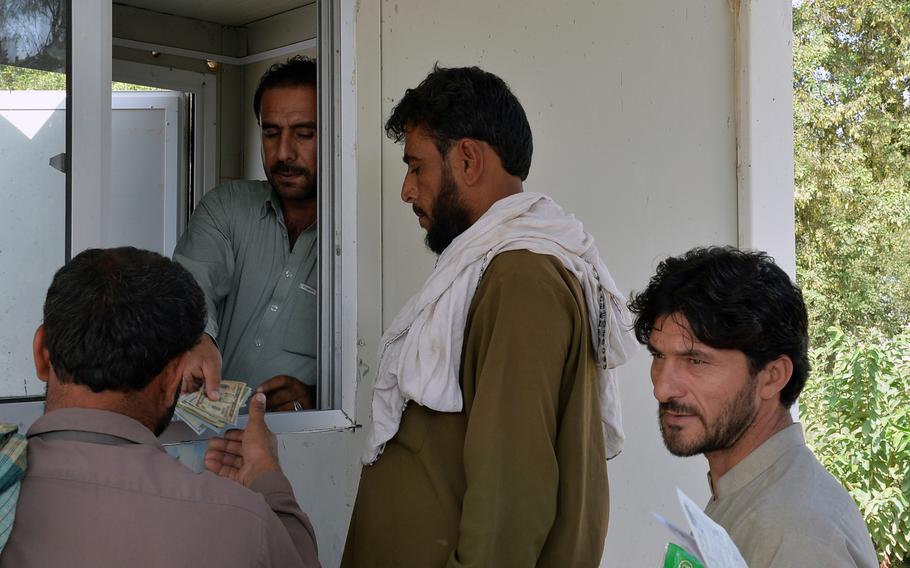 A worker at the Samarkhel Encashment Center outside Jalalabad, Afghanistan, on Thursday, Oct. 6, 2016, distributes cash to Afghan men returning from years of seeking refuge in Pakistan. Families receive about $400 per member to help pay the costs of resettling in their homeland. (Chad Garland/Stars and Stripes) 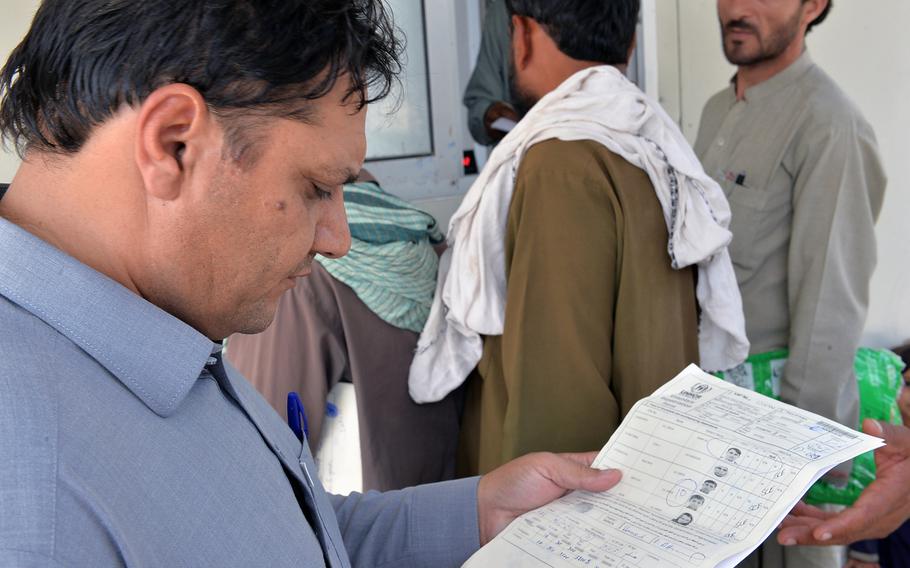 Abdul Wali, director of the Samarkhel Encashment Center outside Jalalabad, Afghanistan, looks over registration documents for a family of 10 refugees returning from Pakistan on Thursday, Oct. 6, 2016. (Chad Garland/Stars and Stripes) 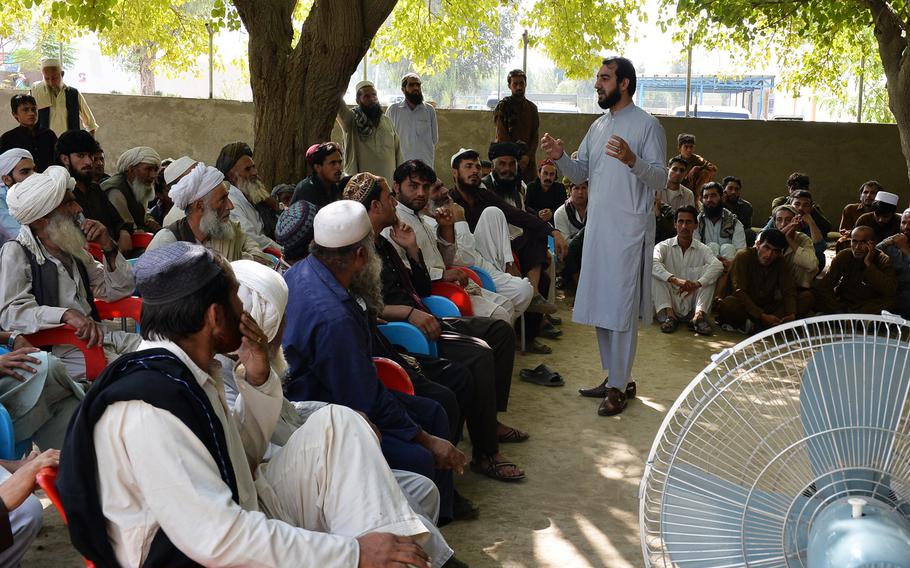 Afghan refugees repatriating from Pakistan are briefed on various issues at the Samarkhel Encashment Center outside Jalalabad, Afghanistan, on Thursday, Oct. 6, 2016. (Chad Garland/Stars and Stripes) 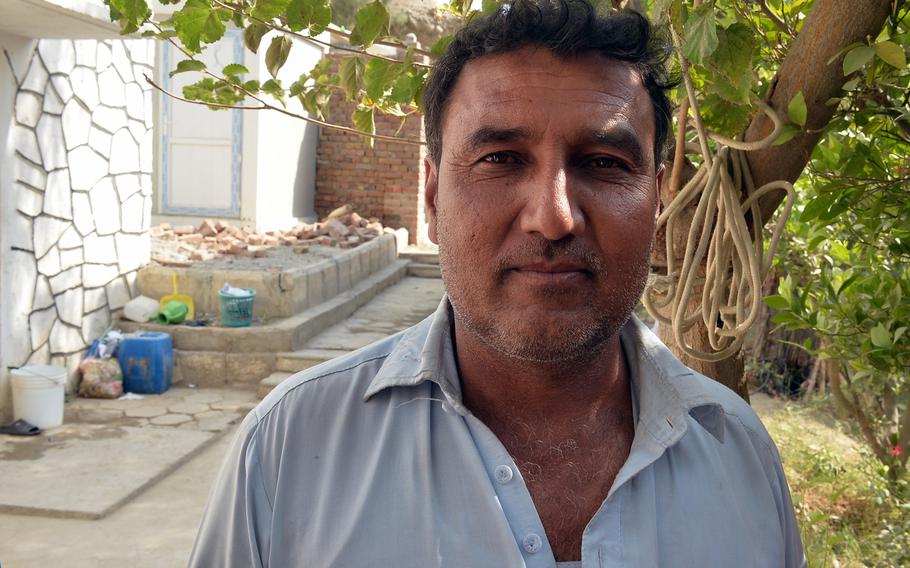 Samil Khan, 42, pictured here on Thursday, Oct. 6, 2016, decided to abandon his vegetable sales business in Rawalpindi, Pakistan, to return to his native Nangarhar province with his wife and five children after Pakistani harassment and abuse of Afghan refugees reached what he considered a peak. (Chad Garland/Stars and Stripes) 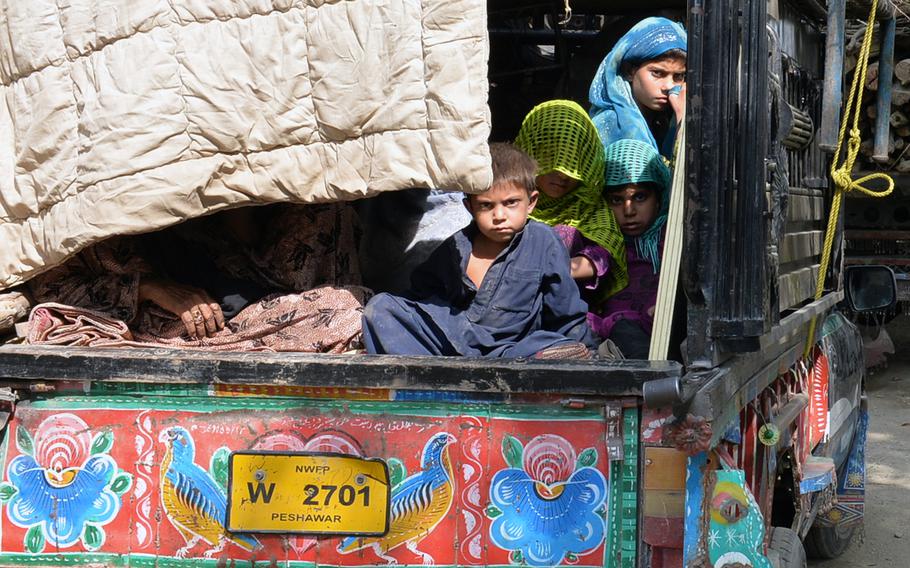 Afghan refugees in a colorful Pakistani truck wait outside the Samarkhel Encashment Center in Jalalabad, Afghanistan, on Thursday, Oct. 6, 2016. Returning refugees register at the center, where they receive financial, legal, administrative and medical aid. (Chad Garland/Stars and Stripes)

JALALABAD, Afghanistan — A simple refrain is being constantly directed at Afghans who have lived in Pakistan for decades: “When will you leave?”

The question is a sign of mounting pressure by ordinary Pakistanis on Afghan refugees in recent months. It’s the title of a new comedy film belittling them and a now-frequent taunt that’s led to hundreds of brawls, according to media reports.

For many Afghans, the answer’s clear: We’re leaving now. They’ve been returning home in droves, inundating communities that are ill-prepared to absorb them and raising fears of greater insecurity in their beleaguered homeland.

Hijratullah, 25, who like many Afghans goes by one name, said he heard the phrase “all the time” in Pakistan, a tale echoed by several other returnees. Hijratullah had just moved from that country, where he was born a refugee, in early October after life there got “very, very difficult.”

Nearly 370,000 Afghans like him have returned so far this year — 90 percent of them since July — according to the United Nations, and about 500,000 more are expected by year’s end. In one week in early October, officials logged more returnees from Pakistan than in the entire first half of the year.

In Kabul, where fewer than a quarter of them settle, demand for homes has skyrocketed, sending monthly rents for four-bedroom houses up from about $150 to more than $210, said Abdul Latif Hewadwal, a real estate agent in the eastern part of the city.

“Dozens of trucks arrive here daily,” he said. They bring refugees and everything they own, but there are no houses available for them. “Even less desirable apartments are now scarce.”

The trek to Kabul takes trucks along a rutted road once littered with Soviet military relics and through a steep and winding mountain pass where the Taliban have recently attacked fuel tankers, leaving charred chassis and scorched asphalt. Their first stop in Afghanistan is outside the eastern city of Jalalabad.

Here one Thursday in early October, the dirt driveway leading to the Samarkhel Encashment Center was crowded with trucks, many piled with people and belongings like the Clampetts’ Oldsmobile in “The Beverly Hillbillies,” but bigger and embellished with fanciful designs and sometimes jingle bells.

Behind the center’s guarded gates, officials register several hundred returnees daily, assisting them with various matters as they try to transfer their lives from across the border after decades abroad.

Pakistan provided safe haven to more than 5 million Afghans who fled trouble at home after the Soviet invasion in 1979. An estimated 2.5 million documented and undocumented refugees still resided there as of last year.

Though not always welcome, they became especially unwanted in June, the returnees said, when the taunts turned to other forms of harassment, including extortion and property seizures. Landlords will not rent to Afghans, and many schools will not enroll their children, they say.

About the same time, Pakistan erected a large gate and tightened security at the major border crossing in Torkham. That led to several days of cross-border skirmishes. Since then, Islamabad began what the U.N. refugee agency described as a “concerted push” to get the Afghans out by early 2017.

A deepening relationship between Kabul and New Delhi has worsened the situation, said Azim Khan, a 45-year-old returnee. The Pakistanis “got diarrhea” over reports in August that its longtime rival might supply new military aid to Afghanistan, he said.

Before last June’s clashes at Torkham, 30-90 Afghans a day were being repatriated in Nangarhar province, said Ghulam Haidar Faqirzai, head of the provincial office of the Ministry of Refugees and Repatriation. By early October, the number had climbed to about 1,000 a day, he said.

The influx comes as Kabul has agreed to accept back tens of thousands of Afghans who were not granted asylum in Europe, and as fighting in and around the country continues to drive thousands from their homes.

With so many streaming back into Afghanistan or being displaced there, the government — with the help of international backers — has established a $150 million operational plan to address the needs of affected families and communities, Faqirzai said.

In Jalalabad, where sputtering auto rickshaws fill streets lined with fruit and vegetable stands, Attaullah Khogyani, a spokesman for the Nangarhar provincial governor, said he was hopeful those who ran successful businesses in Pakistan would reinvest and reinvigorate the economy here.

They’re returning flush with U.N. cash grants of about $400 per person. One father was paid $6,500 for his 17-member family’s return, said Abdul Wali, director of the Nangarhar encashment center.

“This is a big support and assistance for a family and can cover their needs for up to one year,” Wali said. “In case anybody wants to have a small business, he can (start it) for this amount.”

Afghanistan’s national per capita income was about $1,900 in 2015, according to U.N. statistics. But unemployment was at 40 percent, and more than a third of the population lived in poverty.

Hewadwal, the property dealer in Kabul, said the wave of returnees has been good for business there, which is “once again at the peak” after economic woes brought on by the withdrawal of foreign troops in 2014.

Meanwhile, Pakistani businesses may suffer from the exodus. Local media in August said the carpet industry there, which relies on Afghan weavers, was in “dire straits.”

But some Afghans are wary that returnees may bring greater insecurity as they settle in areas where insurgents and terrorists still exert influence and might easily recruit them.

U.S. officials have said the Taliban control or threaten about a third of the country. In Nangarhar, where officials say roughly 70 percent of returnees settle, locals said the Taliban have a presence in all but four districts. Government forces are also fighting an Islamic State spinoff in remote parts of the province along the Pakistani border.

Khogyani said the provincial government is not screening returning Afghans for pro-insurgency sympathies. The authorities don’t want to take drastic action against such returnees, for fear of exacerbating anti-government leanings.

“Maybe they will change by themselves,” he said. “Right now, the major hope is that returnees be treated equally and be happy.”