Tattoos not a badge of honor for Iraqis Iraqi Army Sgt. Ali Raheem shows off a faded tattoo he says he inked himself while serving in the army before the U.S. invasion. Because of army rules prohibiting tattoos, he is getting is removed through a painful surgical procedure. (Heath Druzin / S&S)

Iraqi Army Sgt. Ali Raheem shows off a faded tattoo he says he inked himself while serving in the army before the U.S. invasion. Because of army rules prohibiting tattoos, he is getting is removed through a painful surgical procedure. (Heath Druzin / S&S) 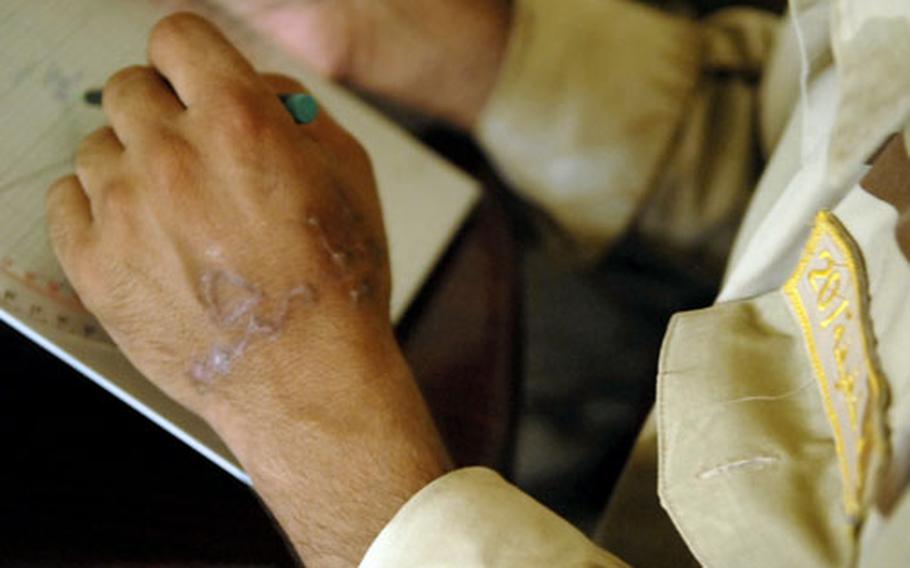 Because of a ban on tattoos, some Iraqi army soldiers are using battery acid to remove their markings, leading to gangrenous sores and permanent scars. (Heath Druzin / S&S)

For Iraqi troops, though, tattoos &#8212; often a sign of a stint in prison &#8212; are taboo. The Iraqi army has passed a rule forbidding them, requiring soldiers with pre-existing tattoos to remove them.

In a country where laser removal is either unavailable or impossibly expensive that means painful options. Some soldiers opt for a surgical procedure where doctors scrape off the inked skin and cauterize the wound. Other, more cash-strapped troops, have resorted to pouring battery acid over their tattoos, an option that can cause gangrenous wounds and leaves grisly scars.

One Iraqi lieutenant, who declined to be identified by name, lauded the rule.

It&#8217;s a sensitive issue for the Iraqi army. When a soldier sat down for an interview about his upcoming tattoo removal, two of his superiors hovered over him and told him how to answer until a reporter asked them to leave.

The 26-year-old soldier, Sgt. Ali Raheem, sports a tiny, fading, Arabic scribble on his forearm that reads, "The dearest person in my heart is my mother."

Raheem said he got the tattoo while serving in the Iraqi army before the U.S. invasion. He used a needle and charcoal to fashion the crude marking.

"I spent a lot of time in the army and I missed my mother," he said matter-of-factly.

He plans to have surgery to remove the tattoo, which he says will cost about $100, a hefty sum for most Iraqis. Despite the expense, he says he has no problem with the rule.

Iraqi army Capt. Majeed Naeem said he supports the rule, but sounded a sympathetic tone for soldiers with tattoos.