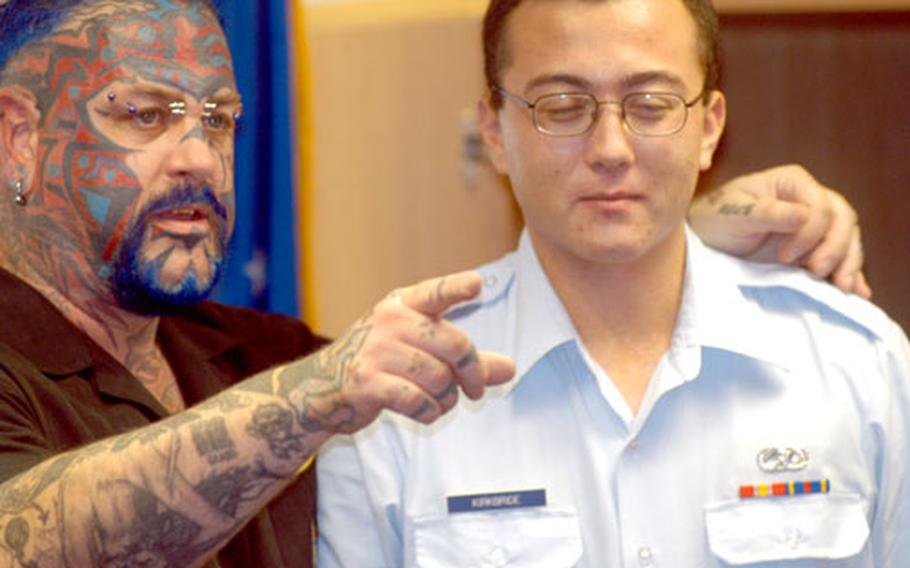 Airman 1st Class Shawn Kirkbride joins The Scary Guy — his legal name since 1998 — in role-playing during the tattooed motivational speaker’s presentation Monday at the First Term Airmen’s Center at RAF Mildenhall, England. The Scary Guy has a message of love and compassion, two things he was without for most of his life, he says. (Ron Jensen / S&S)

At least, at first glance.

He has a face only a mother could love. And even then, the mother would have to be the Bride of Frankenstein.

Covered from head to toe with tattoos, he has more art on him than the ceiling of the Sistine Chapel. His hair is blue and his teeth are gold. He has more face piercings than an entire punk band.

But after a few minutes of delivering his motivational message of love, compassion and tolerance, The Scary Guy doesn&#8217;t seem so scary. He becomes, almost, The Cuddly Guy.

For the next 90 minutes, The Scary Guy &#8212; that has been his legal name since 1998 &#8212; told how he was once filled with anger and hate. He judged people in a moment, almost always in an adverse way. He was bursting at his image-laden seams with negative energy.

But now, at age 50, The Scary Guy is a world-traveled motivational speaker, delivering his message to schools, corporations and military audiences.

The message he spreads like an itinerant preacher is a simple one, yet profound. He says a person&#8217;s negative attitude is directed back at him or her. Conversely, someone who spreads positive energy gets positive vibes in return.

He is prone to pulling out newspaper articles about young children who commit suicide when the bullying they take about their appearance &#8212; too fat, too skinny, too tall, too short &#8212; becomes too great.

His appearance heightens his message. He first got a tattoo when he was 30, not stopping until his body was nearly covered with the inked images.

The result, he said, has been that people judge him by his looks, not by his character or what is in his heart. In other words, they treat him the way he treated people for so long.

It is a good lesson in the judgment of human beings, he said, to follow him through the base commissary and watch the reaction that trails in his wake.

The heart of his message is a challenge. He asks his listeners to spend the next seven days and seven nights saying not one negative word about anyone.

Put a stop to the gossip and the name-calling.

The Scary Guy is sort of like television&#8217;s Dr. Phil, only with a lot more body art. His wife of nine years, Julie Kaufmann, who plays a 22-string lap harp during his presentation, said afterward that her husband has no formal education in psychology or social sciences.

Living in Arizona, the couple is on the road most of the year to spread the message. He said he receives 4,000 letters each month similar to the one he read to the airmen from a young boy being bullied and teased at school.

The airmen who heard The Scary Guy on Monday afternoon, the first day of a three-day stay at U.S. bases in England, came away with something to ponder.

Airman 1st Class Jeremy Lueth said The Scary Guy&#8217;s message is similar to the Buddhism he once studied.

The Scary Guy makes no guarantees that it will be easy. There will be slip-ups and backsliding.

But, he said, the reward is worth the effort.