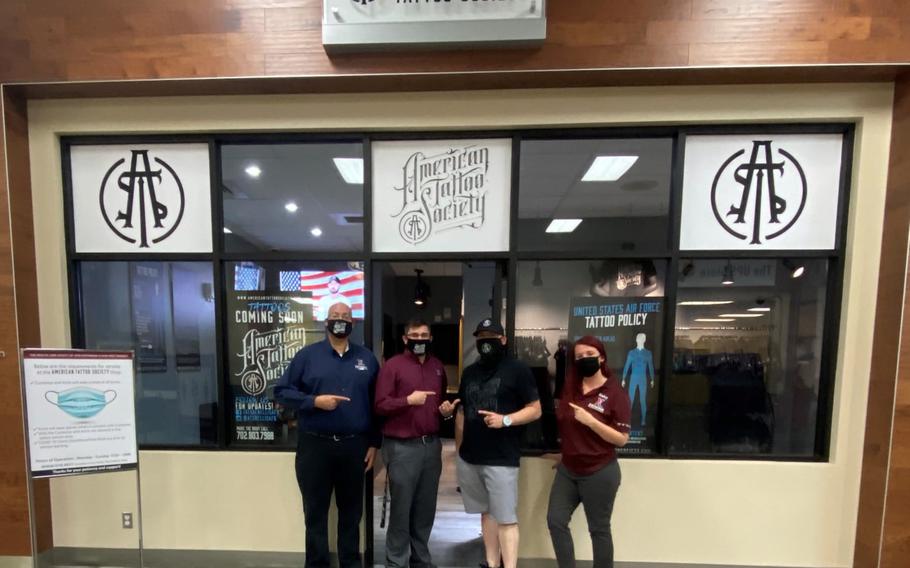 American Tattoo Society on Nellis Air Force Base, Nev., is the first known tattoo shop to open on an Air Force or Army installation. (Exchange Nellis/Facebook)

American Tattoo Society on Nellis Air Force Base, Nev., is the first known tattoo shop to open on an Air Force or Army installation. (Exchange Nellis/Facebook) 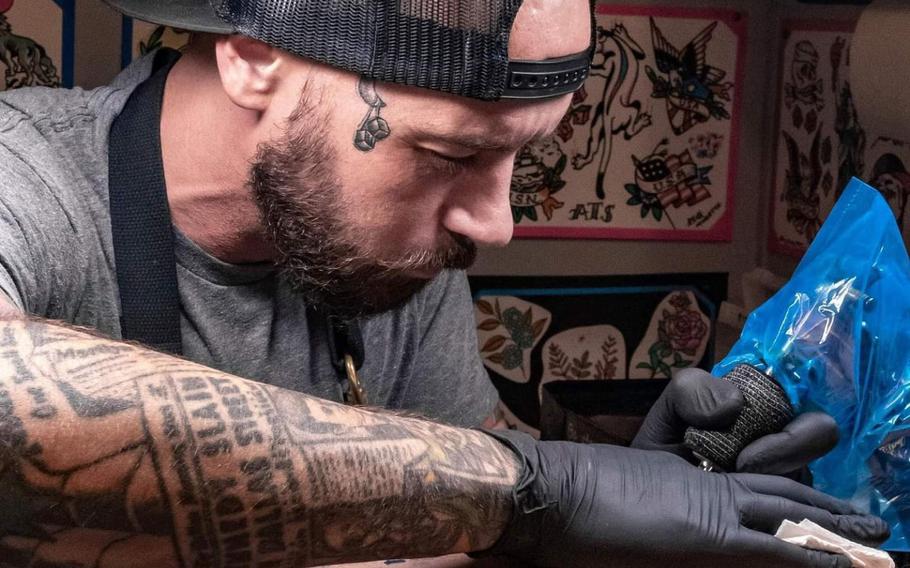 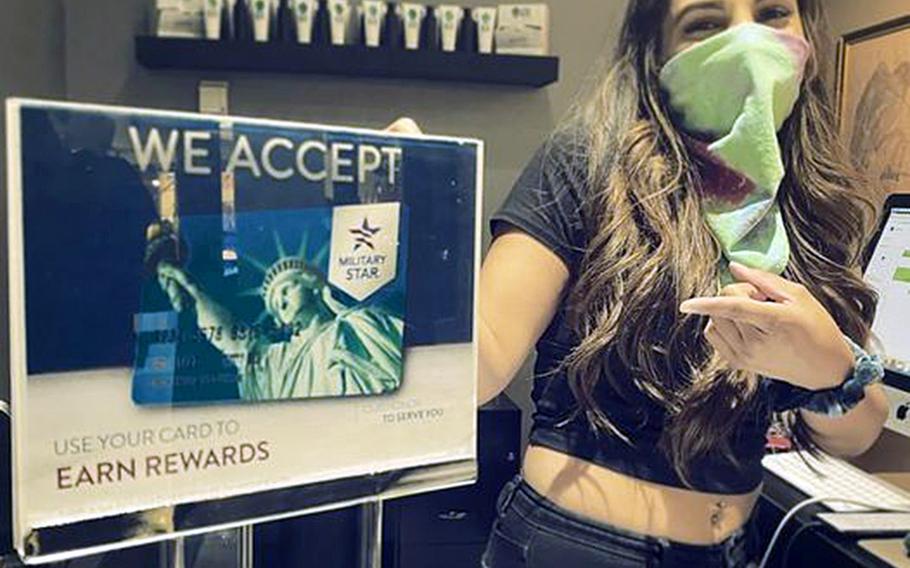 The American Tattoo Society, the first tattoo shop to open on a U.S. military base, recently opened its doors and is having a grand opening celebration at its exchange location on Nellis Air Force Base, Nev., Oct. 2, 2020. (Exchange Nellis/Facebook) 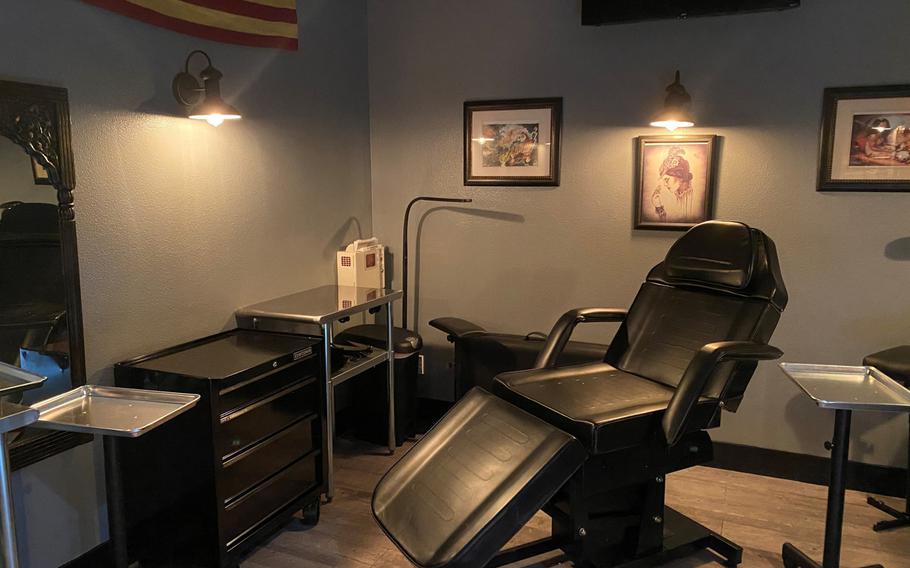 Since the American Tattoo Society opened its latest studio in a storefront northeast of Las Vegas last month, a common reaction from passersby has been disbelief, its owner said.

“It’s wild how many people walk by and they kind of look up and it’s like, ‘Holy ... what am I looking at here?’” said Ryan Harrell, who owns the shop at the Nellis Air Force Base Exchange with his wife, Nicole. “’Is this really a tattoo shop inside the exchange?’”

Yes, it is. And Military Star Cards are accepted at the store, which opened last month. Its grand opening celebration begins Friday morning.

Though some U.S. bases have had visiting tattoo artists, the exchange’s tattoo parlor appears to be the first of its kind. No other Army, Air Force, Navy or Marine exchange has operated or provided space for such a venture before, according to several exchange officials.

Harrell hopes the Nellis location is the first of many on-base shops for his company and has sights set on Fort Bragg, just down the road from the couple’s flagship studio in his hometown of Fayetteville, N.C., where they have run the All American Tattoo Convention for several years.

Started by his wife when she was still a schoolteacher more than five years ago, the business caters to military personnel and has since opened a second shop just off Camp Lejeune in the eastern part of the state.

Company staff were already familiar with service regulations, Harrell said, and the owners had existing policies barring designs such as the Confederate flag or extremist, gang-related or other hateful artwork, like those banned by the military.

But news they were opening on a base surprised some industry old-timers who considered it an impossibility for decades, he said. He and his wife were “kind of shot down immediately” several years back, he said.

Then he heard Army and Air Force Exchange Service officials had changed heart a few years ago, when several services relaxed their tattoo policies, including the Air Force’s 2017 decision to end size limits on most tattoos to boost recruitment.

The commands that operate exchanges on Marine Corps and Navy bases have also been looking into opening tattoo parlors, officials with both outfits said this week.

The two exchange services have worked with Navy medical personnel on protocols for allowing such shops to operate on base, Marine Corps Exchange spokesman Bryan Driver said Wednesday. The service is still evaluating those rules, he said.

Meanwhile, the Navy Exchange Service Command has considered sites but “has no specific plans to open tattoo parlors at any Navy installation,” said Courtney Williams, a spokesperson for that service.

AAFES had discussed putting shops at several of its sites, Harrell said, such as planned Freedom Crossing outdoor shopping centers — groundbreaking for one of those on Bragg had been scheduled for this spring — but Nellis was chosen after a day spa in the exchange closed late last year.

Harrell, whose grandfather served at Bragg, still expects to open there and at four other sites in the coming years, but said location doesn’t matter as much as the customers.

“We’re just happy to be there to do tattoos for the (service members),” he said.

The exchange put American Tattoo Society through a rigorous vetting process to ensure it could meet health and safety requirements, AAFES spokesman Chris Ward said in an email this week.

Harrell expected a second on-base shop to be announced soon, he said in a phone call Sunday,

AAFES was more cautious in an emailed statement to Stars and Stripes. No future locations have been decided on or confirmed, and the exchange is “working to determine whether other locations best support this business,” said Julie Mitchell, a spokeswoman for the Dallas-based agency.

Harrell thinks his shop will become a way for military leaders to ensure artists follow uniform and appearance regulations, giving them some peace of mind about the indelible experience many of their troops will undergo.

“They already know they’re going to get a tattoo anyway,” Harrell said.