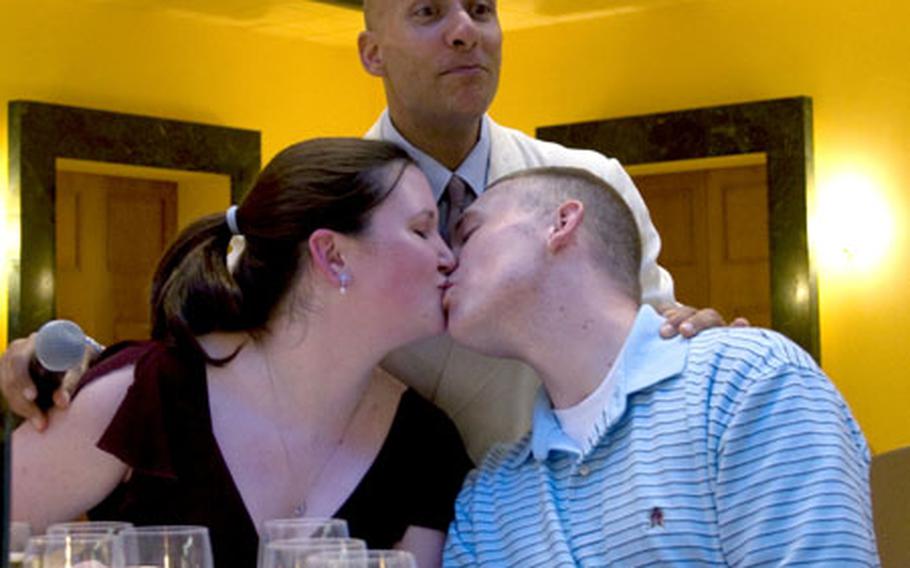 Sgt. 1st Class Antonio Giuliano of the U.S. Army Chorus, "Pershing&#39;s Own," encourages Sgt. Robert Evans and his wife, Karen, to kiss at Friday&#39;s dinner for wounded servicemembers at the Italian Embassy in Washington. The Evanses are about to celebrate their first wedding anniversary. (Joe Gromelski / S&S)

Sgt. 1st Class Antonio Giuliano of the U.S. Army Chorus, "Pershing&#39;s Own," encourages Sgt. Robert Evans and his wife, Karen, to kiss at Friday&#39;s dinner for wounded servicemembers at the Italian Embassy in Washington. The Evanses are about to celebrate their first wedding anniversary. (Joe Gromelski / S&S) 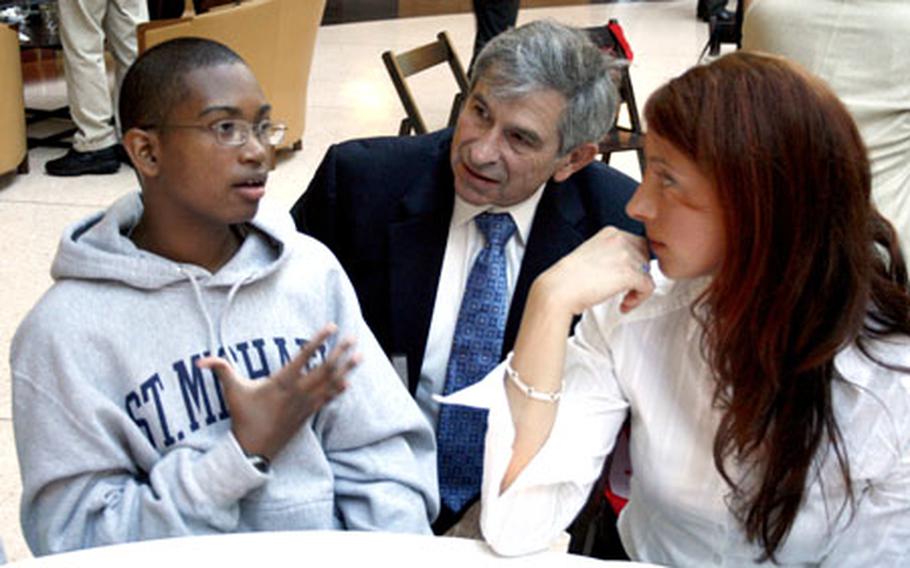 But for wounded veterans and their families, Friday night actually was pretty glamorous: an evening as the honored guests of Gianni Castellaneta, Ambassador of Italy, and Lila Castellaneta, complete with opera and zucchini risotto.

But the star of the dinner was the risotto, a toothsome, creamy rice preparation that demands patience and skill to prepare.

The dish must be stirred constantly as it cooks, with rich broth added one careful ladleful at a time so the rice can absorb the liquid.

After dinner, the guests were entertained by light opera by tenor Sgt. 1st Class Antonio Guiliano, a member of the Army Band.

Among the guests was Army Pfc. Marcus Labadie, 21, who had just been released that same day from Walter Reed to a resident facility nearby.

Labadie is a tanker from the 2nd Infantry Brigade&#8217;s 1st Battalion, 5th Cavalry Regiment from Fort Hood, Texas. He was on a Humvee patrol with the &#8220;Loose Cannons&#8221; 2nd Platoon, Company D in Baghdad on June 15 when a roadside bomb went off. Labadie suffered extensive injuries, including a broken back and left elbow. Quick reactions by a medic he remembers only as &#8220;Specialist Navarro&#8221; mean that he will someday walk again instead of being paralyzed, he said.

For now, however, Labadie is in a wheelchair and encased in an unforgiving neck brace. During the dinner, he fought gamely to ignore the shooting pain in his back caused by the unusual amount of movement the evening entailed.

Labadie&#8217;s thoughts turned to his buddies back at Camp Liberty in Baghdad, who deployed with him in October and are working on the Army&#8217;s 15-month combat tour.

The dinner marked the second time the Italian Embassy has hosted the veterans. The embassy first opened its doors to the wounded troops in May 2006.

In the Washington area, Friday night dinners for wounded vets are a three-year old tradition started by Hal Koster, co-owner of the Fran O&#8217;Brien steakhouse in Washington, D.C., and his friend and fellow Vietnam veteran Jim Mayer.

Medical staff who have seen the effect the Friday outings have on the participants say &#8220;this is a hugely important part of their therapy,&#8221; said Shoshana Bryen, a member of the Jewish Institute for National Security Affairs, one of the dinners&#8217; sponsoring organizations.

Four times, surgeons at Bethesda have attempted to replace the half of Browning&#8217;s skull, which had to be removed when he had a stroke, in order to relieve swelling of his brain.

Four times, infection forced them to remove the plate.

Browning was hoping to have surgery to replace the plate again later this month. But he just got the news he must wait until October, to lessen the chances of another infection.

For Marine 1st Lt. Andrew Kinard, 24, and his date, Navy Lt. (Junior Grade) Rachel Engler, a nurse at Bethesda, the music and food underlined an evening already made perfect by the presence of &#8230; each other.

The young Naval Academy graduate (Class of 2005) from Spartanburg, S.C., lost both legs to a roadside bomb during a foot patrol in Rawah, in Anbar province in Iraq, on Oct. 29, 2006.

Engler, 23, who also danced as a Washington Redskins cheerleader during the 2005-06 football season, said she fell for Kinard when she came into his room to care for him, with all his IV lines and a tracheotomy tube in his throat.

She was greeted by a feisty smart aleck who promptly began issuing orders for his care.