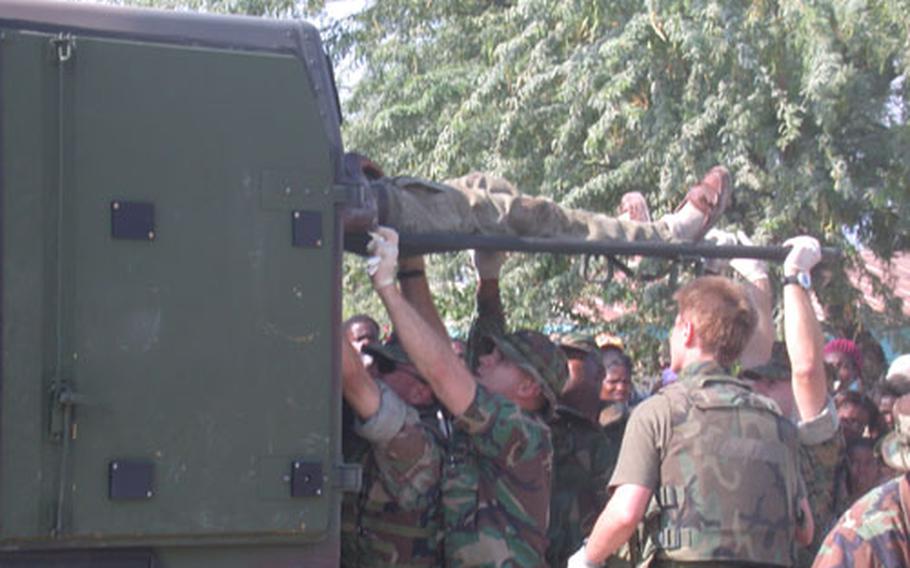 Injured patients were loaded into many "double decker" military ambulances and taken to the fleet hospital on the compound housing the headquarters of the Combined Joint Task Force-Haiti. The truck flipped right outside of the headquarter&#39;s main gate. (Sandra Jontz / S&S)

Injured patients were loaded into many "double decker" military ambulances and taken to the fleet hospital on the compound housing the headquarters of the Combined Joint Task Force-Haiti. The truck flipped right outside of the headquarter&#39;s main gate. (Sandra Jontz / S&S) 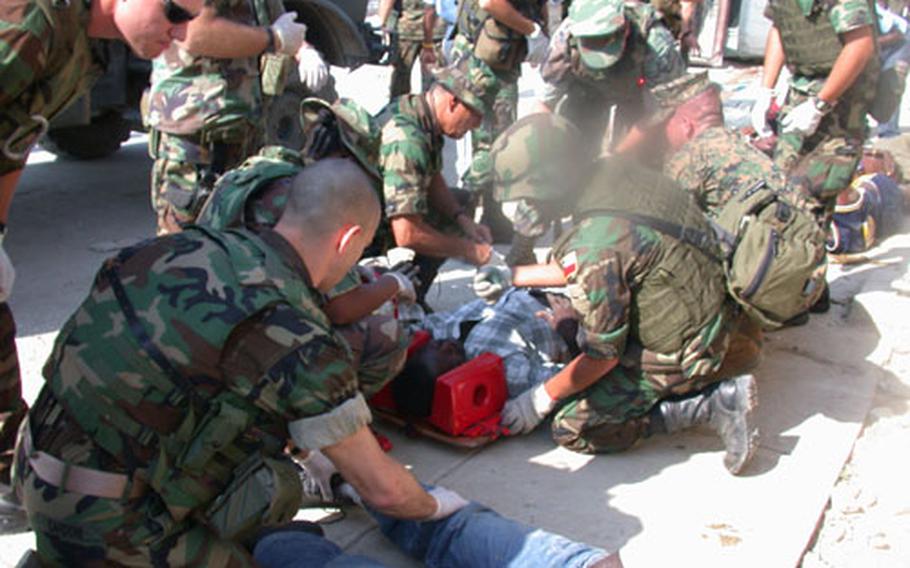 Military members tend to patients injured when the dump truck in which they were traveling took a corner too quickly and flipped. (Sandra Jontz / S&S) Many of the injured were treated at the Combined Joint Task Force-Haiti headquarters in Port-au-Prince. (Sandra Jontz / S&S) Hundreds of military personnel flocked to the incident to tend to the injured. (Sandra Jontz / S&S)

PORT-AU-PRINCE, Haiti &#8212; U.S. and coalition forces responded Thursday when a dump truck carrying hundreds of Haitians in its bed tipped over and injured about 50 people, some severely.

Fourteen Haitians were transported by military ambulances, first to the Combined Joint Task Force-Haiti headquarters, then to Haitian hospitals.

Two were seriously injured, one with a crushed chest and another with a serious lower leg injury, said Task Force spokesman Marine Lt. Col. David Lapan. Witnesses at the scene said the man&#8217;s leg was amputated in the incident.

About 36 patients were treated at the scene, mostly for cuts and bruises.

One witness, Jacques Robert Julien, said about 300 people were traveling in the back of the dump truck, which took a curve too fast and rolled over.

The crash happened around 3 p.m. right outside the main gate of the CJTF-H headquarters, which houses medical staff and has an operating room, Lapan said.

However, because the facility does not have any X-ray capabilities, the 14 patients were transported by military ambulances with Haitian National Police escort to a hospital in Port-au-Prince, Lapan said. They now are under the care of Haitian medical personnel.

Coalition personnel rushed to the scene and immediately triaged the injured, taking care of the most severely wounded and separating those who could walk on their own from those who needed to be placed on stretchers and loaded into double-decker military ambulances.

Hundreds of Haitians gathered at the scene, trying to push their way closer to the injured as U.S. soldiers and Marines worked to keep them from hampering the rescue effort.

Many were crying and wailing until all the injured had been cleared from the area. The crowd migrated to the main gate and waited in the afternoon heat for word of the status of the injured.

It&#8217;s common in Haiti to see people packed into vehicles, especially the &#8220;tap-taps&#8221; or colorful taxis that zip through the streets of Port-au-Prince.