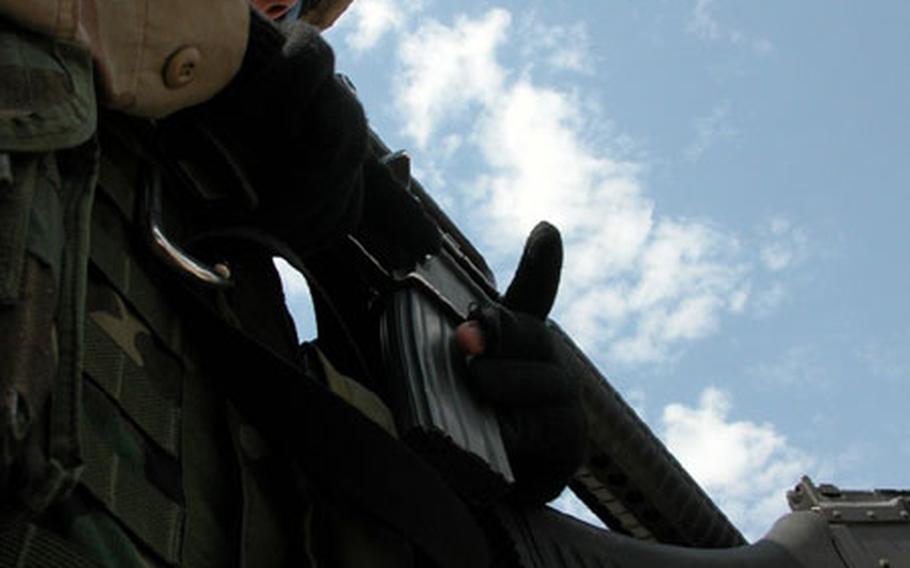 Pvt. Richard DeLeon of Berlin, N.Y., is ready for trouble as he mans his weapon atop one of the 2nd Battalion, 82nd Field Artillery Regiment armored Humvees during escort duty Tuesday in Baghdad. (Lisa Burgess / S&S)

Pvt. Richard DeLeon of Berlin, N.Y., is ready for trouble as he mans his weapon atop one of the 2nd Battalion, 82nd Field Artillery Regiment armored Humvees during escort duty Tuesday in Baghdad. (Lisa Burgess / S&S) 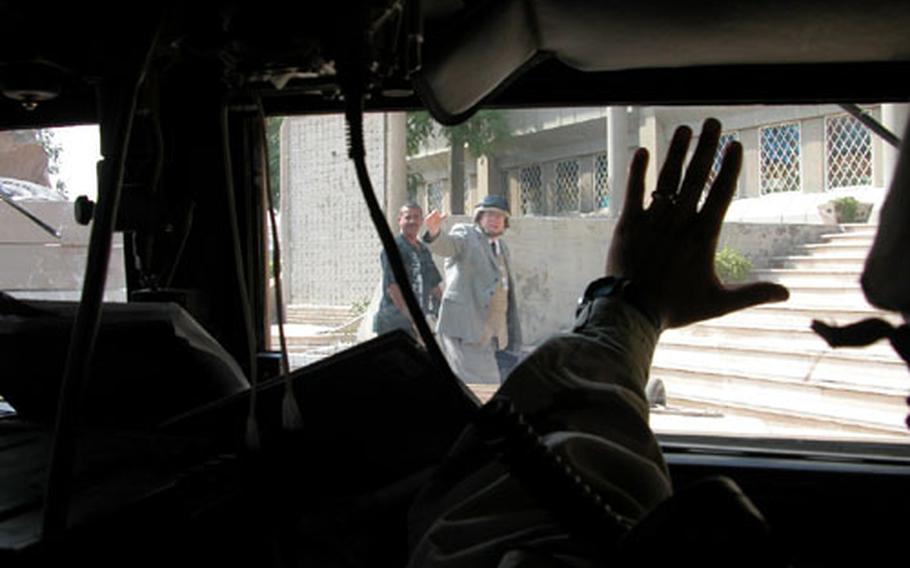 That&#8217;s how far the crews of Task Force Steel Dragon have driven since April 8, when the battalion began escort duty in Iraq.

Maintenance workers have been recording the mileage of each vehicle and adding them together, Schultz told Stars and Stripes on Tuesday inside the International Zone, the protected area in the middle of Baghdad that houses the U.S. Embassy and other critical Iraqi and global entities.

The Steel Dragons&#8217; mission is simple: provide convoy escort protection for employees of the U.S. Embassy and members of the Multinational Forces Iraq wherever they travel.

But nothing in Iraq is simple.

To begin with, the 1st Cavalry Division unit was not designed for security or military police work; it is a field artillery unit. So its soldiers have had to master an entirely different set of skills in a few months before deploying, Schultz said.

Thanks in part to lessons learned from its predecessor, the 3rd Battalion, 2nd Armored Cavalry Regiment, &#8220;we hit the ground pretty well prepared,&#8221; Schultz said. &#8220;The only thing these guys lacked was real-world experience.&#8221;

As of Saturday, the battalion had completed 2,610 missions.

Schultz said the task force has faced 50 attacks since April, from roadside bombs and mortars to rocket-propelled grenades and small-arms fire.

Yet not a single soldier from the battalion has been killed, though some 25 soldiers in the task force have pinned on Purple Hearts, and one contractor died after a roadside bomb exploded, Schultz said.

About 70 percent of the battalion&#8217;s missions are in Baghdad, Schultz said, but others take it everywhere in Iraq.

Gross is platoon commander for 4th Platoon, Battery A. His &#8220;Hellraisers&#8221; are one of the battalion&#8217;s most battle-hardened units, with more than 70 missions under its belts.

Inside Gross&#8217; boonie cap, neatly inked with crosshatches, is a record of what the soldiers have gone through in their five months in-country: nine enemies killed and 11 IEDs, or improvised explosive devices.

There have been lulls in the violence, notably after the interim Iraqi government took over, Schultz said.

Iraqi police are now taking a more active role, he added, which seems to be having a positive effect on quelling street violence, at least in Baghdad, he said.

The platoon&#8217;s most intense fight came on June 28, a day none of the soldiers say they will ever forget.

The soldiers were braced for trouble: A police station nearby had been burned the previous day, said Staff Sgt. Michael Medina.

The two Humvees in the rear were hit by a roadside bomb. As the smoke cleared, one of the stunned gunners spotted a man in a tree preparing to fire a rocket-propelled grenade. He immediately started firing.

Medina said he was in the front vehicle and &#8220;was on the radio, asking what was happening, and all I could hear was shooting.&#8221;

Seconds later, the two front vehicles got the same treatment as the soldiers in the rear as an IED exploded.

In the second vehicle, Gross&#8217; driver passed out momentarily, and then came to as the gunner began to scan for targets.

The rear vehicle gunners turned their sites on the bus and &#8220;Z-patterned it,&#8221; spraying it with fire.