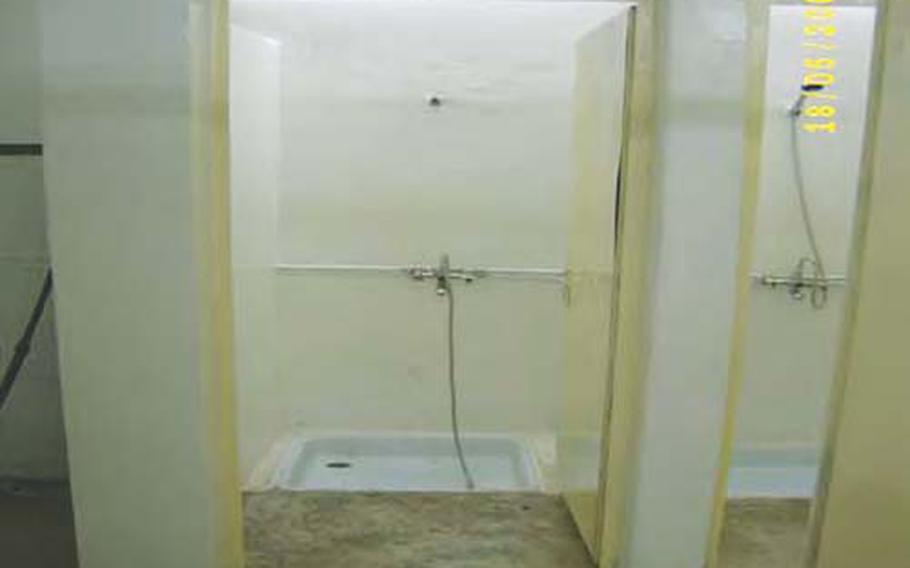 Spc. Marcus O. Nolasco was electrocuted while showering at this facility on Forward Operating Base Summerall, Beiji, Iraq, on May 18, 2004. The Defense Department has created a task force to inspect all facilities in Iraq after more than a dozen U.S. troops have been electrocuted. Included in the list are thousands of facilities whose electrical work was completed by defense contractor KBR. (Courtesy of the Department of Defense)

An Army task force re-inspecting thousands of potentially unsafe U.S. facilities in Iraq for faulty electrical wiring says a contractor previously ordered to conduct inspections of its own work placed 5,600 facilities on a &#8220;deferred&#8221; list &#8212; meaning they were low priority or there were no plans to inspect them.

Officials with the Defense Department&#8217;s 135-member Task Force SAFE said many of the buildings on KBR&#8217;s deferred list were still being used by soldiers. As a result, the task force moved these facilities to the top of its inspection list, according to a Sept. 8 internal memo.

Sixteen U.S. troops and two contractors were electrocuted &#8212; and hundreds more incurred shock-related injuries &#8212; in Iraq over a span of four years, prompting the Defense Department to create the task force last year to physically inspect every military facility in the country, the majority of which were provided by KBR. Additionally, the Defense Contract Management Agency directed KBR to inspect all 75,000 of its facilities, a process that began last February.

But Multi-National Forces&#8211;Iraq let KBR either postpone or abandon site inspections because of confusion surrounding the status of the thousands of facilities, a military official said.

The Army said the deferred list is intended for facilities not likely to be used, that have been abandoned, are about to be turned over to the Iraqi government or are located in sensitive areas.

Brig. Gen. Kurt Stein, the senior logistics officer in Iraq and who serves as the director for Task Force SAFE, said there initially was confusion over these deferred facilities.

But &#8220;once KBR identified that they were not going to validate these facilities, they were made the [task force&#8217;s] top priority,&#8221; Glen MacDonald, program manager for Task Force SAFE, wrote in an e-mail to Stars and Stripes.

When first reached about the issue three weeks ago, KBR spokeswoman Heather Browne denied any knowledge of a &#8220;deferred&#8221; list.

Two weeks later &#8212; after being provided a copy of the list by Stars and Stripes &#8212; Browne acknowledged only 120 facilities as deferred, stating those facilities required special access to complete inspections. She said the list, titled &#8220;Deferred Un-inspected,&#8221; includes deferred and nondeferred facilities and that KBR is inspecting all of its facilities. She would not, however, say when that decision was made.

Requests to talk with other KBR officials were denied.

There are 3,350 KBR deferred facilities that had not been inspected for electrical safety as of Oct. 31, according to Navy Capt. Russ Hughes, a Task Force SAFE spokesman. While KBR is in the process of inspecting 150 of those facilities, the Defense Contract Management Agency is considering the status of the remaining deferred facilities. If the DCMA decides those facilities will be abandoned, they won&#8217;t be inspected, he said.

While electrical hazards still exist, Stein said much has improved.

Bonding creates a safe pathway for electricity to flow between components, while grounding ensures that pathway leads to the ground to absorb any current.

The task force is expected to complete inspections on all facilities in Iraq by the end of January.