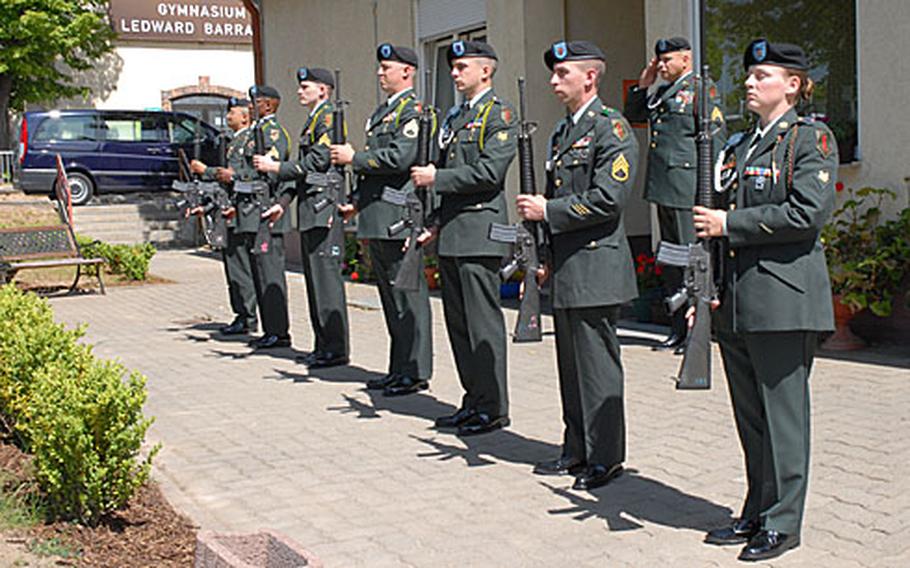 Both men previously had served in combat &#8212; De Leon with the 10th Mountain Division in Afghanistan in 2002 and Starcevich in Tikrit, Iraq, with the 4th Infantry Division during the first portion of the conflict there.

&#8220;[He] will be the subject of tales told in smoky bars and barracks rooms that only grow taller in the telling. That is our duty to him now.

Remembered by all for his infectious smile, and as a member of the Company A family, De Leon, of San Francisco, is survived by his wife, Erika; 2-year-old son, Keoni; mother, Barbara; and older brothers Gabe and Bruce.

Always playing music, always prepared, always willing to do anything.

Starcevich&#8217;s mother told Lt. Col. Robert Whittle, rear detachment commander in Schweinfurt, that when he was little he had a military outfit someone had given him.

Ava Tomson always knew her boy would grow up to be a soldier.

In addition to his mother, he is survived by his father, Bradley, a former Air Force officer; and stepmother, Glenda, of St. Charles, Ill.; and stepfather, Richard Tomson, of Tolono, Ill.; brother, Trenton; and sister, Ariana Starcevich-Reyes.

De Leon and Starcevich were the eighth and ninth members of 1-18 to die during the present deployment.

Second &#8220;Dagger&#8221; Brigade Combat Team, 1st Infantry Division, of which the battalion is a part, has lost 31 soldiers since leaving for Iraq in August and September.