Pakistani soldiers load boxes of clothes, bound for earthquake victims, into the back of a U.S. Army CH-47 Chinook on Chaklala Air Field, Pakistan, on Friday. Weather has been good recently, allowing the helicopters to fly numerous missions each day. (Fred Zimmerman / S&S)

Pakistani soldiers load boxes of clothes, bound for earthquake victims, into the back of a U.S. Army CH-47 Chinook on Chaklala Air Field, Pakistan, on Friday. Weather has been good recently, allowing the helicopters to fly numerous missions each day. (Fred Zimmerman / S&S) 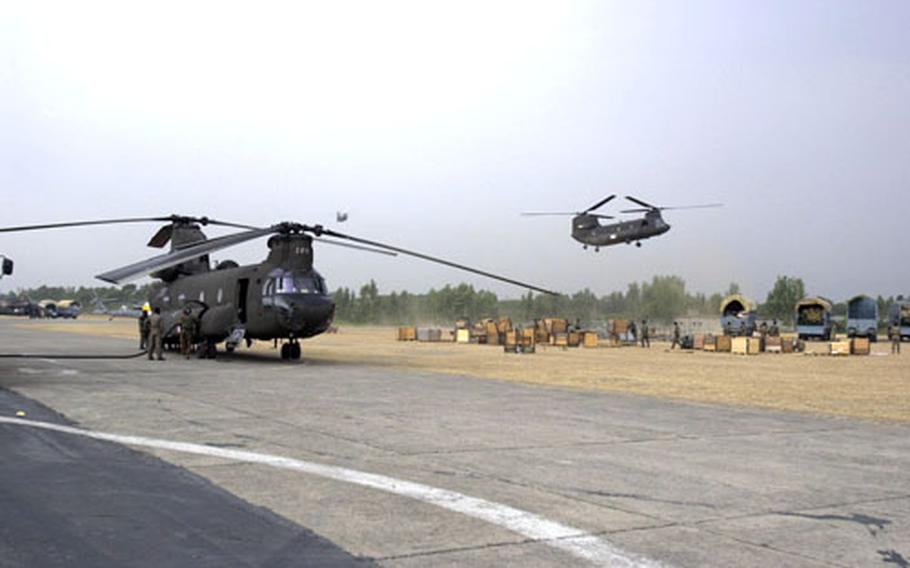 A Chinook is refueled Friday after completing a relief supply mission as two others return to Chaklala Air Field, Pakistan. (Fred Zimmerman / S&S) Two Chinooks are loaded with relief supplies at Chaklala Air Field after a mission in Pakistan on Friday. (Fred Zimmerman / S&S)

CHAKLALA AIR FIELD, Pakistan &#8212; Every day, flights leave this airfield bound for remote villages and communities that were destroyed by the Oct. 8 earthquake.

The flights have been able to go on nearly nonstop in the days since, but that may soon change as the winter months take a chilling grasp on the Himalayas.

Army Col. Bob Johnson, the commander of Task Force Eagle &#8212; the aviation element at the Disaster Assistance Center here &#8212; said it&#8217;s now a race against time to get critical items such as shelter to those affected by the earthquake.

As of Friday, Johnson said, the helicopters have moved more than 6 million pounds of relief supplies. He said the primary items going out now are tents, blankets, clothing and food. He said efforts now are now reaching out to smaller villages and areas that aren&#8217;t accessible by road.

Two of those pilots, Navy Lt. Lamar Hardy and Army Chief Warrant Officer 2 David Woodward, who fly the MH-60 and UH-60, respectively, said while there is snow on mountaintops, the weather has cooperated.

&#8220;So far the weather hasn&#8217;t prevented us from getting to any of our [landing zones],&#8221; Woodward said. Hardy said they have seen some fog, slight precipitation and a little turbulence. If the weather is bad in one area, they said, they just avoid that region and operate where the weather is better.

Helping the pilots stay on top of the weather situation here is a network of forecasters.

Petty Officer 1st Class Jason Ehlenberger, a meteorology and oceanography forecaster at the DAC, said reports are a collaborative effort of forecasters at the DAC, nearby Qasim Army Air Base, the 28th Operational Weather Squadron at Shaw Air Force Base, S.C., and Expeditionary Strike Group 1 forecasters on the USS Tarawa.

While weather is pretty good for flying now, Ehlenberger said the region is in a &#8220;transition season.&#8221; Snow showers are currently at 7,000 feet, but will soon loom lower, possibly affecting flight operations by December. Low visibility, icing on the aircraft and turbulence are some of the cold weather effects that could keep helicopters on the ground.

Another danger, he said, are thunderstorms, which can develop quickly in the mountains. On Friday, flights were temporarily halted after a bolt of lightning struck the ground on Chaklala Air Field, close to where the helicopters are loaded and refueled.

In the coming months, Ehlenberger said, the thunderstorms in lower elevations and snowstorms higher up could keep the helicopters grounded for days at a time.

While the number of missions flown may draw down, Woodward said he&#8217;s happy to help as much as he can.