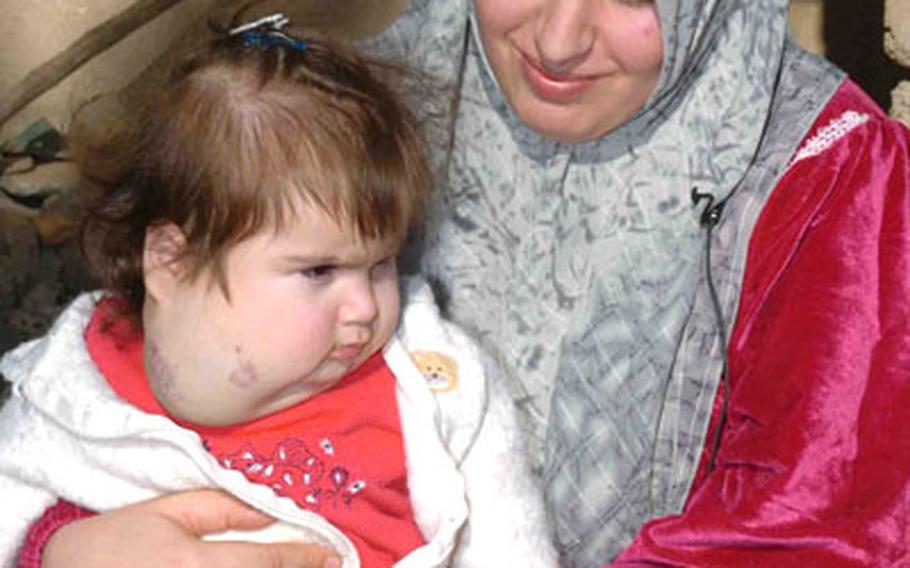 A 14-month-old Iraqi girl has returned home after six months of treatment in Ohio for a disfiguring birth defect, according to a news release from the Tikrit-based Task Force Danger.

Doctors at Children&#8217;s Hospital in Columbus had treated Fatemah Hassan since May for a cavernous hemangioma, an abnormal growth of blood vessels on the right side of her face, neck and upper chest that had swelled to the size of two softballs, the release said. The condition is treatable in the United States, but rural Iraq lacks the necessary medicines and surgeons.

Last spring Fatemah&#8217;s mother, Baday Amir Abdel-Jabar, had brought the girl to the front gate of Forward Operating Base Rough Rider, a U.S. military base near their hometown of Mandali, the release said. Mandali is about 75 miles northeast of Baghdad, near the Iranian border. FOB Rough Rider has since been closed.

Lt. Col. Todd Fredericks, a surgeon for the West Virginia Army National Guard&#8217;s 1st Battalion, 150th Armor Regiment, worked with the Iraqi Defense Ministry and the Coalition Provisional Authority to arrange transportation to Columbus, according to the release. Fredericks knew doctors from Ohio State University who would treat Fatemah for free.

The doctors there at first had planned to operate but decided to postpone the surgery until the girl turns 5, the release said. Instead, they treated the girl with chemotherapy. She will continue to take medicine until she is old enough for the operation, according to the release.

While in Columbus, the baby and her mother lived with a Muslim family and commuted to the hospital, the release said. She returned to Mandali in November.

Task Force Danger is commanded by the Germany-based 1st Infantry Division and comprises 22,000 soldiers patrolling a large area north and east of Baghdad.