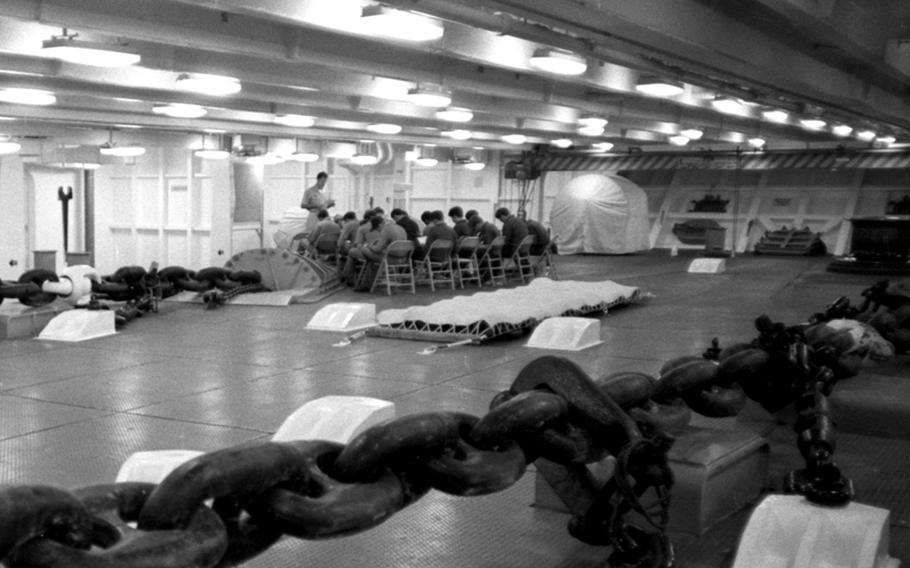 In August, 1976, Lt. Mike Daniel administers a mathematics exam in one of the unconventional classrooms aboard the USS Nimitz, amid the anchor chains in the carrier's forecastle. (Gus Schuettler/Stars and Stripes)

ABOARD THE USS NIMITZ &mdash; How would you like to attend six months of college or take courses preparing you for a university while cruising, complete with free room and board, around the Mediterranean?

Atomic-age tars aboard this nuclear powered aircraft carrier, currently on a six-month Med cruise, are afforded this opportunity but there are a few catches, according to shipboard educators.

Students also have to work approximately 12 hours a day and stand watches &mdash; a far cry from a glamorous campus life.

The students aren't the only ones who put in a full workday aboard the ship. Two of the instructors are also full-time officers who devote their off-duty time teaching college courses.

Lt. Mike Daniel and Lt. (j.g.) Ray Wenderlich are currently teaching college prep math courses in some rather unconventional classrooms. For instance, Daniel is preparing his students for their final math exam on the fo'c'sle amidst the chains that raise and lower the ship's 30-ton anchors.

Morris is an "old salt," having previously served aboard the Albany before "shipping in" the Nimitz by signing a seven-month contract.

"One nice thing about teaching college prep here is that there are no disciplinary problems," said Pignataro. "Those taking prep courses are really interested in getting a higher education and every man on the ship that takes off-duty courses is making a sacrifice."

"What they are sacrificing, because of their long and hard-working hours, is their sleeping time," added the shipboard educator.

If Nimitz students prefer to attend an East Coast college they can enroll in the PACE program which can lead to a degree from Virginia's Old Dominion College.

Dr. Howard Heglin and Dennis Armstrong from Old Dominion are the instructors for the floating branch of the college.

"The semester started on July 8, the day we left Norfolk," said Ens. Drew Malcomb, the Educational Service Officer here. "We're set up to run three semesters on this cruise and we'll continue the program when we get back to Norfolk."

In addition to the high school, college prep, and college courses offered here, Malcomb also conducts other off-duty educational programs which includes all the courses sailors have to take to become eligible to compete in fleet-wide competitive examinations for advancement in rating.

Chief Personnelman Norman Sanders and seven of his petty officers handle all advancement and professional Navy courses for the 6,000 men aboard the Nimitz, according to Malcomb.

"Petty Officer 3.C. Mike Allen, another personnelman, who has had a lot of experience with the officer programs, coordinates the DANTE and the PACE programs. He also handles the enlisted-to-officer programs grams which includes the Naval Academy, OCS, Navy Enlisted Scientific Educational Program (NESEP) and numerous others," said Malcomb.

The Defense Activity for Non-Traditional Education (DANTE) offers courses from high school level, including programs for vocational work, to college courses. "Here, we're talking about the better colleges with 10 of them offering graduate work," Malcomb said.

Another program, which is taken advantage of on the ship, is the College Level Examination Program &mdash; CLEP for short &mdash; which gives college credit for knowledge acquired on the job and through other learning experiences.

"We are preparing to administer 150 of these one-hour, five-area, tests," said Matcomb. "A student can earn six semester hours in each basic subject, such as English and history, and these hours will be credited toward his further college education. In other words, if he successfully passes this test &mdash; which is geared to the college sophomore level &mdash; he won't have to take certain basic courses but will receive the credit as though he had formally taken them."

The sailors that have been out of high school for any length of time have been boning up for the CLEW exam by taking college prep courses, according to educators aboard this carrier whose campus include a 4&frac12;-acre flight deck.

"We have a good educational system right aboard the ship and participation in it doesn't count against the GI Bill," Malcomb said. The sailors use the Tuition Aid program where the government pays 75 per cent of the cost of whatever course they are taking and they pay the difference.

"The one problem we have here is lack of adequate counseling. We have a lot of good Navy Career Counselors aboard but no professional education counselors," added Malcomb.

"The vast majority of sailors want to further there education but many don't know exactly what career they want to pursue so they don't know what educational path to follow.

"What we are going to have to do is have the men take advantage of the Navy Campus for Achievement (NCFA) in Naples and Norfolk."

All Navy installations have NCFA offices which coordinate the administration of Navy educational programs.

"They have professional counselors who can sit down with the sailors and discuss what avenues they should take to achieve a specific goal just as a college-level counselor would do," said Malcomb.

"Whether a sailor is preparing to get his high school diploma or getting ready for college or taking college courses, this ship has a great program," said Mike Daniel, full-time Navy lieutenant and part-time prep and college course instructor.

"It was a hard program to get started and it sometimes becomes difficult to continue it at sea because of flight deck duties. Some guys just have to drop out because the combination of their work, attending classes and studying just gets to be too much," Daniel said.