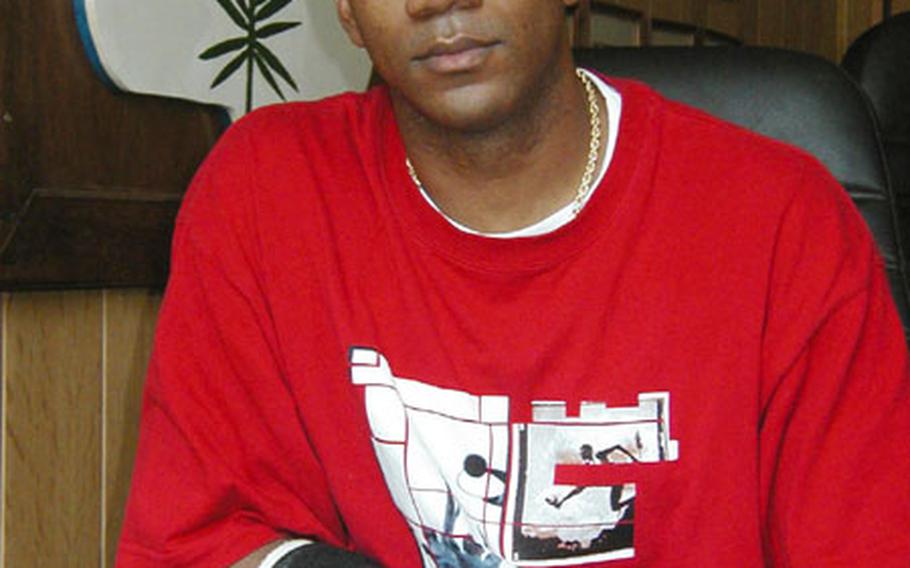 Staff Sgt. Michael Broner, 31, of the 1st Battalion, 26th Infantry Regiment, knew he was still alive after a suicide truck bomber rammed his barracks room in Samarra, Iraq, July 8, because he felt pain when another soldier stepped on his leg. (Steve Liewer / S&S)

Staff Sgt. Michael Broner, 31, of the 1st Battalion, 26th Infantry Regiment, knew he was still alive after a suicide truck bomber rammed his barracks room in Samarra, Iraq, July 8, because he felt pain when another soldier stepped on his leg. (Steve Liewer / S&S) 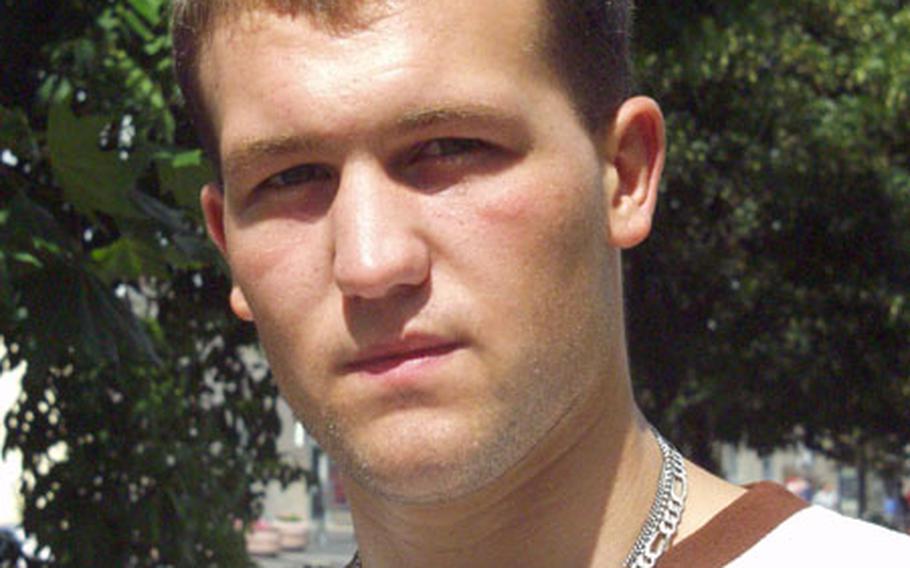 On July 8, Spc. Matthew Campbell, 21, of the 1st Battalion, 26th Infantry Regiment walked out of his barracks room in Samarra, Iraq, to shave three minutes before a suicide bomber rammed a truck into the building, killing five 1-26 Infantry. (Steve Liewer / S&S)

Editor&#8217;s Note: This is the first installment of a three-part series.

Cpl. Owen Fulsome sat on the edge of his bunk, munching a blueberry muffin and clearing the sleep from his brain.

Minutes earlier his buddy, Spc. Damon Le, 19, had jostled the cot of the dark-haired 21-year-old Fulsome, his mortar platoon team leader, to wake him for his 11 a.m. shift monitoring the radio.

Fulsome and a dozen or so mortarmen from the 1st Infantry Division&#8217;s 1st Battalion, 26th Infantry Regiment lazed around their barracks room in shorts and T-shirts. Some slept, others ate, and a few just zoned out, capturing a few minutes of air-conditioned refuge from the searing July 8 morning at the Iraqi National Guard compound near the city of Samarra, a restless rebel stronghold 60 miles north of Baghdad.

Fulsome jumped up behind him, heading toward the safety of the back room of the two-room barracks, where troops from Company A slept. He had run six or seven steps when the truck slammed into the front wall a few feet from his bunk. He turned to look and saw its headlights glaring at him through the room&#8217;s open front door.

On Sept. 11, 2001, Fulsome was shooting marksmanship drills in basic training.

When Broner signed up in 1998, he planned to serve only three years. Instead he found he loved it. By the time he reached Schweinfurt in December 2000, he&#8217;d decided to make the military a career.

Within two months, rumors were confirmed with orders: The 2nd Brigade would head to Turkey to support the possible invasion of Iraq. It packed up and waited. Not until after Baghdad fell did they learn for certain they had missed the war.

Soldiers in Germany spent much of the fall at training areas in Hohenfels and Grafenw&#246;hr, readying for a mission they were told would be a little war and lot of peacekeeping. Most held mixed views on their belated Iraq deployment: sad to leave behind wives, husbands, kids and sweethearts, but glad to join the fight they&#8217;d been cheated out of a year earlier.

They got their fight, with a vengeance.

By March, Task Force 1-26 landed at Forward Operating Base Brassfield-Mora, near Samarra. It was barren and rundown.

But the phones and Internet hookup worked, if sporadically and slowly. Hot chow arrived via dangerous daily convoys from Tikrit.

Trash-strewn Samarra, home to 300,000 &#8212; mostly Sunni Muslims allied with Saddam Hussein &#8212; had troubled the Americans since the beginning of the occupation. A roundup last December had netted 70 suspects. Deadly roadside bombs still killed and injured soldiers from time to time, and every so often a few mortar rounds would be lobbed at the base.

Things heated up in mid-April after a rebel attack on a checkpoint, which soldiers said escalated into a 24-hour firefight pitting the insurgents against the newly minted Iraqi National Guard troops. Fulsome and Terry said many hadn&#8217;t yet received basic training, and some of the Iraqis were as young as 15.

For the next three months, occasional mortar and homemade-bomb attacks punctuated an uneasy calm as the Blue Spaders grew accustomed to combat patrols around Samarra, but generally avoided the still-rebellious city.

As spring turned to summer, Task Force 1-26 troops supported the slowly rebuilding force at the Iraqi National Guard headquarters on the Tigris River, just across a bridge from the city.

At the request of city officials, U.S. and Iraqi patrols stayed out of the city, essentially turning it over to guerrilla forces. From guard posts, Fulsome said, it was easy to see rebels carrying grenade launchers on the streets of Samarra. Iraqi soldiers who lived in the area wore ski masks even on the hottest days, Fulsome said, for fear of revenge attacks on themselves or their families if they were recognized.

Last week, the U.S. military launched a major offensive to regain control of the city, attacking insurgent positions and searching homes after going months without a U.S. presence in the city.

In early June a warning reached the National Guard camp that someone might try to drive a truck bomb onto the base. The guards searched vehicles carefully but never spotted any explosives.

U.S. soldiers said they warned the Iraqi soldiers guarding the base&#8217;s concertina-wire gate: Never open it for any vehicle until you&#8217;ve checked the driver&#8217;s identification.