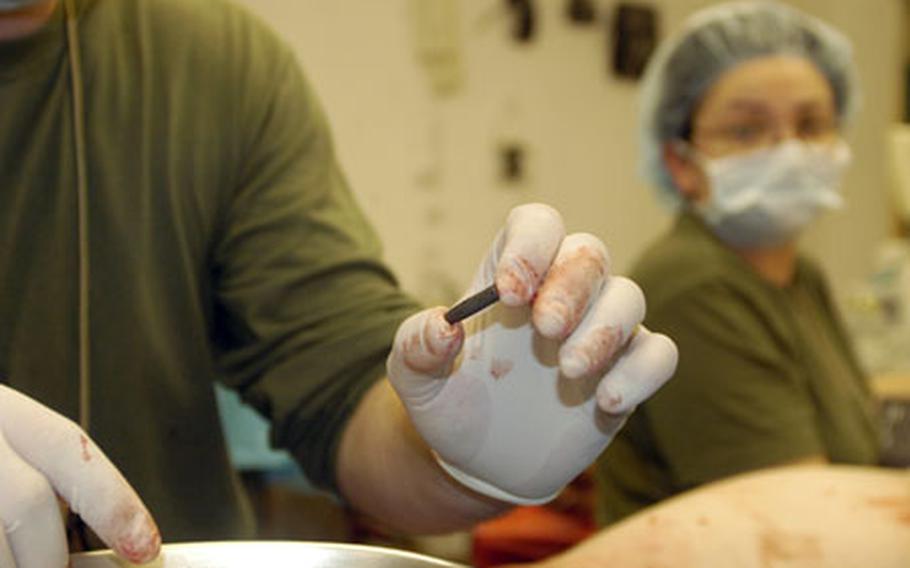 Dr. (Lt. Cmdr.) Chris Carr inspects a bullet taken from the groin of a Marine who had been shot in the leg. The bullet was removed by Dr. (Lt. Cmdr.) Angela Earley, a trauma surgeon (not pictured). (Sandra Jontz / S&S)

Dr. (Lt. Cmdr.) Chris Carr inspects a bullet taken from the groin of a Marine who had been shot in the leg. The bullet was removed by Dr. (Lt. Cmdr.) Angela Earley, a trauma surgeon (not pictured). (Sandra Jontz / S&S) 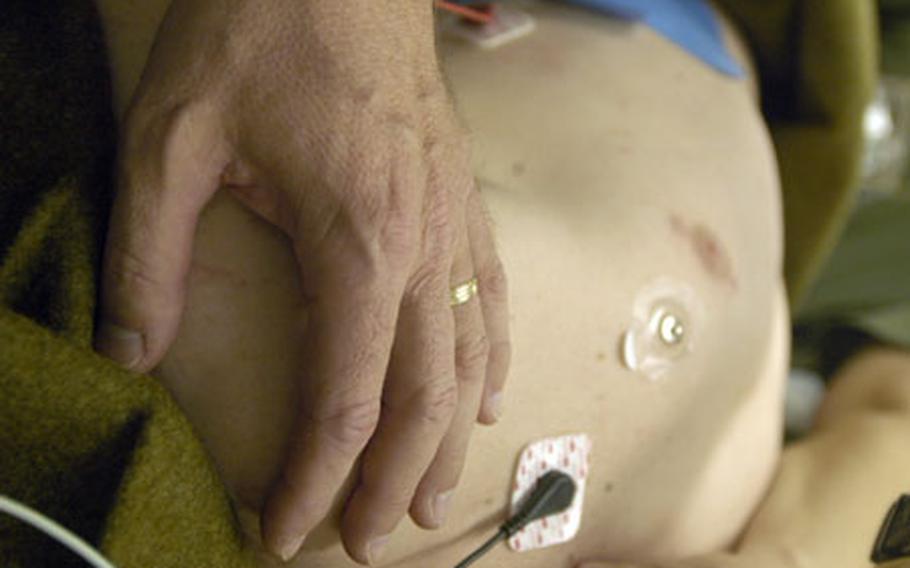 Chaplain (Lt. Cmdr.) Patrick McLaughlin places a comforting hand on the shoulder of a young Marine just as he drifts off to sleep under anesthesia before surgery for a gunshot wound to the leg. (Sandra Jontz / S&S) On the left, medical personnel from TQ Surgical work to stabilize a U.S. Marine who was shot in the leg. On the right, medics stabilize a young Iraqi boy who was crushed when the car he was traveling in rolled over in an accident. (Sandra Jontz / S&S) Navy Dr. (Capt.) Jefferey Jernigan listens to a young Iraqi boy’s lungs after medical personnel inserted a tube to help the child breathe. The boy had been crushed by a car in an accident near Fallujah and flown by U.S. military helicopter to the surgical unit at Camp Taqaddum. (Sandra Jontz / S&S) 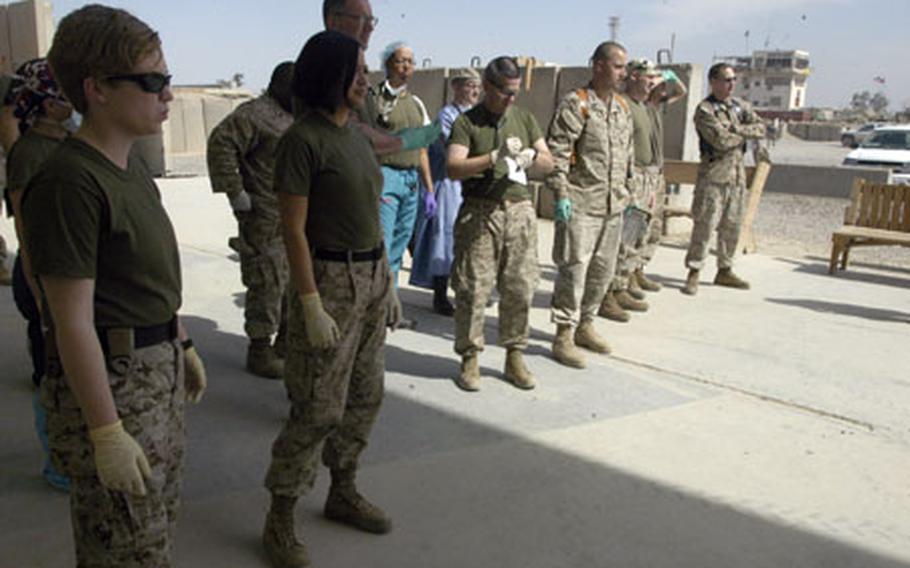 Medical personnel from the surgical unit at Camp Taqaddum anxiously wait for a helicopter to land and bring in Iraqi patients who had been injured in a car accident. (Sandra Jontz / S&S)

CAMP TAQADDUM, Iraq &#8212; The chaos in a battlefield trauma center boils down to a well-choreographed dance for the medical personnel, who scrambled side by side to save the lives of patients who enter their stage.

On one gurney, medical personnel worked first to soothe a frightened young boy, squirming and crying. His chest and neck had been crushed in a car crash. His condition quickly deteriorated, and doctors hastened to insert a breathing tube and rhythmically pump puffs of hair into his small lungs.

On a gurney some five feet to the child&#8217;s right lay a young U.S. Marine, shot through his right leg with a bullet still lodged near his groin.

Three gurneys to the young Iraqi boy&#8217;s right sat his brother, eyes wide as medics cut off his clothing to examine injuries to his chest and back.

And two gurneys to the boy&#8217;s left, his older sister was having her broken leg put in a cast, her eyes darting from medic to medic in an apparent attempt to make sense of the confusion.

Medics already had treated the childrens&#8217; father, mother and another boy, who each had sustained superficial wounds when the car they were in rolled over on a dirt road near Fallujah &#8212; an accident witnessed by U.S. Marines who then radioed for helicopter transport to the surgical unit on Camp Taqaddum.

Welcome to a snippet of what could be any hour, any day at TQ Surgical, a Level II trauma hospital specializing in saving life and limb of critical patients. The center is staffed by Surgical Company, 2nd Maintenance Battalion (Reinforced), 2nd Marine Logistics Group.

The tempo at TQ Surgical can run from fever-pitch to monotonous on any given day, said Navy corpsman Petty Officer 3rd Class Jimmy Young, 24.

For the staff, a patient is a patient, no matter whether they pledge allegiance to the U.S., Iraqi or any other flag, he said.

The unit, made up of medics from Camp Lejeune, N.C., and doctors who hail from across the United States, arrived roughly a month ago. The Camp Pendleton-based unit they replaced left a legacy: a 95 percent success rate of saving and stabilizing patients who entered the tan metal medical dome that is home to the high-tech emergency room and four operating rooms.

TQ Surgical&#8217;s Level II designation means it is equipped to save life and limb, provide critical, immediate care to stabilize patients to be transported to a higher level facility if needed, said Jernigan, an anesthesiologist and naval reservist activated since August 2005.