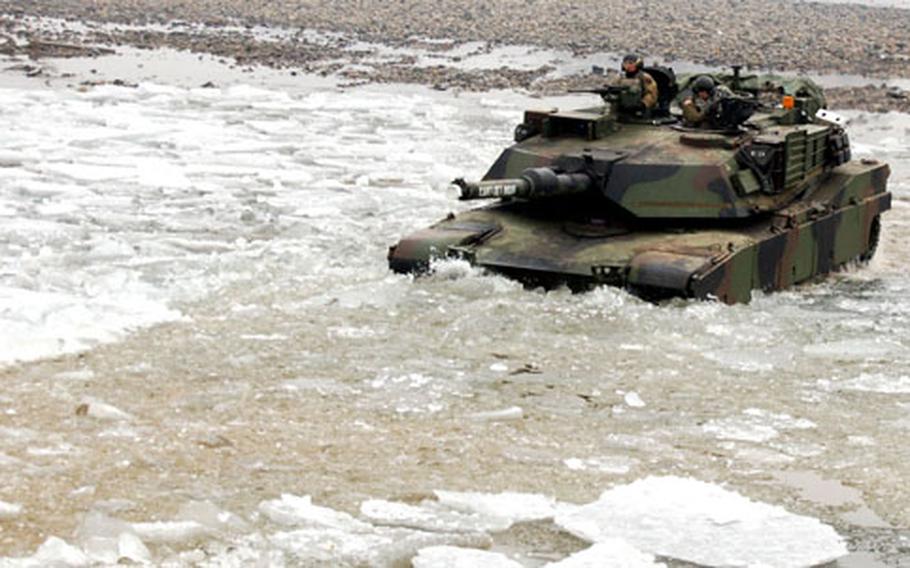 An M1A1 Abrams tank belonging to the 2nd Battalion, 9th Infantry Regiment crosses the Imjin River on Thursday during a joint exercise. (Jimmy Norris/Stars and Stripes)

Rumbling engines and rattling tank treads could be heard Thursday near Rodriguez Range, South Korea, as U.S. and South Korean armored vehicles plowed through the icy waters of the Imjin River.

Unable to submerge like their South Korean counterparts, the U.S. tanks followed from a shallower part of the river once the Koreans had crossed.

South Korean Col. Lee Hyon-mo, commander of the 75th Armor Brigade, said the exercise was the first time U.S. and South Korean forces had conducted a joint river crossing in the winter.

He said such exercises are important in helping the forces of both countries learn how to work together.

The four-day exercise began Monday and featured tours of 38th Armor Battalion Headquarters, classes on tank maintenance and practice runs across the river before crossing it at "combat speed" on Thursday.

"It was a great opportunity to come and experience Korean army tankers and learn about their lifestyle," the 2nd Battalion&#8217;s Pfc. Eric Lubus said.