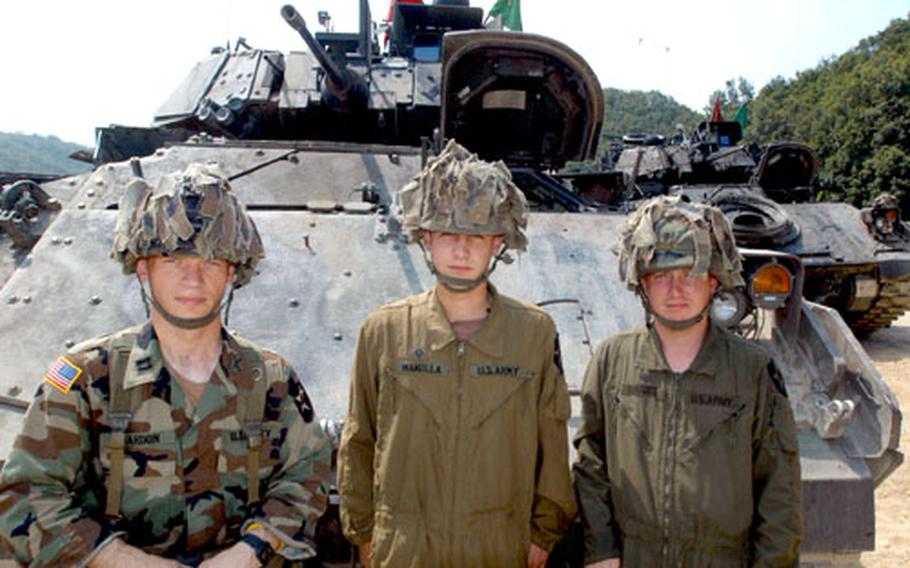 His unit added the tanks, formerly assigned to 1st Battalion, 72nd Armored Regiment, and the engineers, from the recently inactivated 2nd Engineer Battalion, as part of the 2nd Infantry Division&#8217;s transformation over the past six months.

Kuhn said last week that the tanks, Bradleys, engineers and infantrymen equipped with Javelin anti-tank weapons made the unit, which is training at Rodriguez Range until the end of the month, a force to be reckoned with.

&#8220;The tanks have increased our firepower capability and lethality. What it really does is puts together a combined arms team that trains together all the time and gives the brigade and division commander a lethal capability we did not have before,&#8221; he said. &#8220;Before [transformation] we had to task organize. We would train together as a ad hoc organization.&#8221;

The unit&#8217;s new configuration made Kuhn &#8220;confident we could destroy anything up to a brigade or regimental-sized organization if we were in a defensive situation.&#8221;

His unit is 2nd ID&#8217;s oldest and his soldiers have passed their history and traditions to the newly added soldiers, he said. He said 2-9 also has incorporated the prestigious lineage of the tank and engineer companies, he said.

The training at Rodriguez Range this month, preparation for platoon-level training in October, is designed to give crews and individual soldiers confidence operating their weapons systems, he said.

At the range Wednesday morning, 2-9 Company B commander Capt. Mike Reardon, 32, of San Antonio, sweated in the blistering heat while a pair of Bradleys moved up to their firing positions and crews scanned for targets.

&#8220;Right now we are doing crew practice. All the work done prior to this, like individual training on the weapons and maintaining the vehicles, is what nobody sees,&#8221; he said.

The first part of the sustainment gunnery practice, for both tankers and Bradley crews, involves a dry run. Crews scan for targets on the range and then go through their fire commands. After that crews do live-fire runs, then practice moving and stationary engagements, day and night shooting and nuclear, biological and chemical warfare drills, he said.

&#8220;Normally you are just making sure the weapons systems is working, so when you fire live rounds is when it pays off,&#8221; said Company B Bradley gunner Spc. Joshua Harris, 29, of Campton Ky.