Tank training in S. Korea proceeds with Iraq in mind 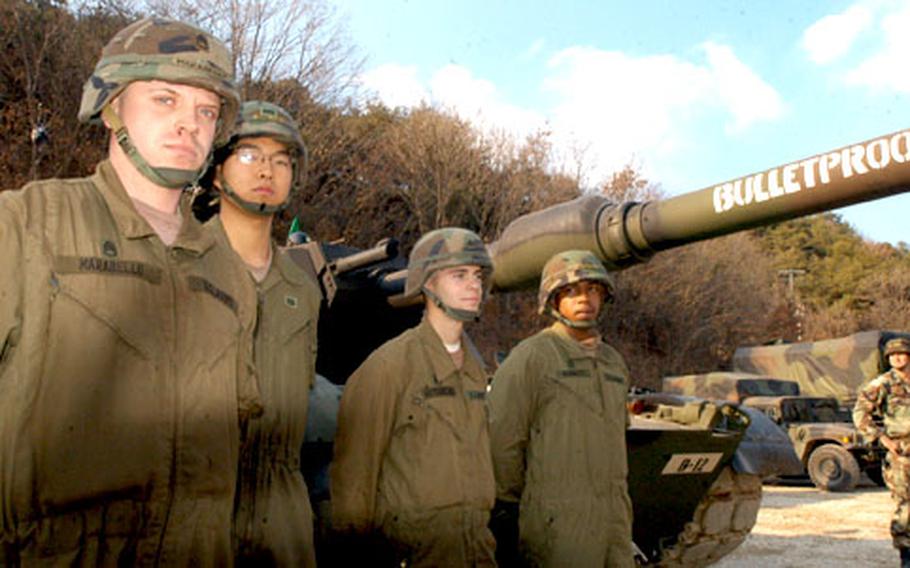 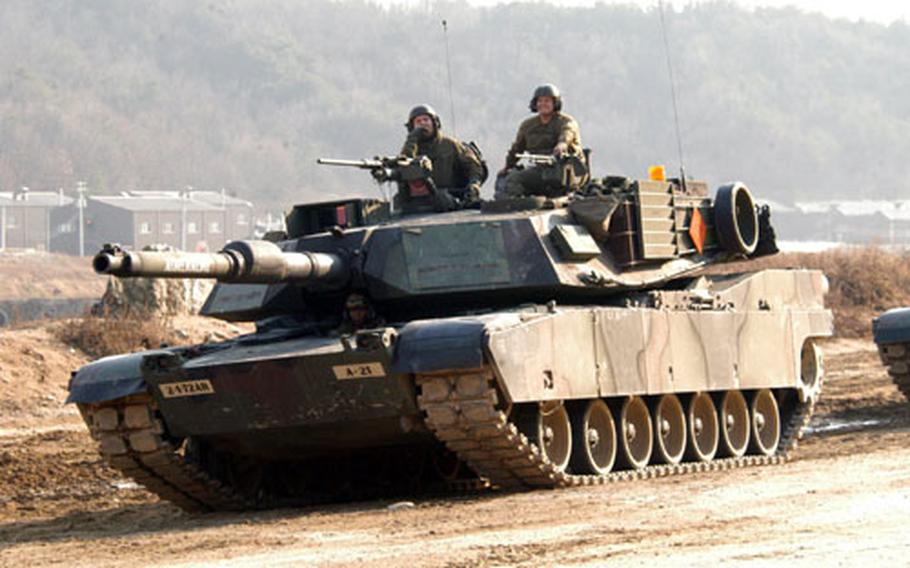 RODRIGUEZ RANGE, South Korea &#8212; U.S. tankers in South Korea are learning that they might have to break some old habits, including the golden &#8220;death before dismount&#8221; rule, if and when they deploy to Iraq.

The Rodriguez Range crew training happens several times each year to reinforce skills and sustain the unit&#8217;s readiness for its mission on the Korean Peninsula, Martin said.

One of the tank commanders whose crew trained at the range, Staff Sgt. Anthony Marabello, 25, of Brooklyn, N.Y., passed on lessons learned in combat to his crew.

&#8220;We are a new crew and this is our first time shooting. The payoff is building confidence in our weapons systems,&#8221; he said, standing about 200 yards from firing positions where, moments earlier, a pair of M1A1 Abrams Main Battle Tanks had blasted high explosive rounds and machine-gun bullets downrange.

Marabello&#8217;s 3rd Infantry Division patch marked him as an Iraq veteran, like many of the battle-hardened leaders joining 2nd Infantry Division&#8217;s ranks these days. The &#8220;green&#8221; crewsaid their commander&#8217;s Iraq experience added a touch more authenticity to the training.

Anecdotes from the desert are one way lessons of war are passed on to new soldiers.

&#8220;[Marabello] told me about his tank commander in Iraq, who got a bronze star for valor saving a family in a car,&#8221; said Hutchens, who expects to put his training to use some time soon.

Marabello learned a lot about his tank during the long drive from Kuwait to Baghdad in the first stage of the Iraq war, he said.

&#8220;It was 92 hours of straight driving. Sitting in that tank, sleep deprivation started to kick in. I only got five to 20 minutes of sleep a night but with the adrenaline and the fact that you knew there was an enemy out there trying to kill you, you kept going,&#8221; he said.

Tankers sometimes have to use nontraditional tactics in Iraq, he said.

&#8220;There is an old golden rule that tankers have: death before dismount. But when the metal hits the road sometimes you have to dismount in Iraq. Sometimes things happen that are beyond your control and you have to dismount the vehicle to fight the enemy. In Najaf we pulled up to a checkpoint and parked the tanks. We had to move into the city on foot and set up battle positions. In Baghdad we had to go door to door and start clearing buildings,&#8221; Marabello said.

So in South Korea, he trains his crew in infantry tactics as well as tanker skills.

&#8220;I have been preparing them to dismount the vehicle. That is what the tankers in 1st Cavalry Division are doing now [in Iraq]. Anytime we are just standing around the motor pool waiting for a mission or performing maintenance, I will show them what it is like moving with infantry or engineers or other assets that we don&#8217;t have the opportunity to work with here,&#8221; Marabello said.

However, not everything applicable in Iraq works in South Korea, he added.

&#8220;This terrain is completely different than the desert, so we have to adjust our mission sometimes. You try to keep them combat-oriented. We are the front lines of defense as tankers and when it comes down to it, we will be the ones engaging and destroying the enemy,&#8221; he said.