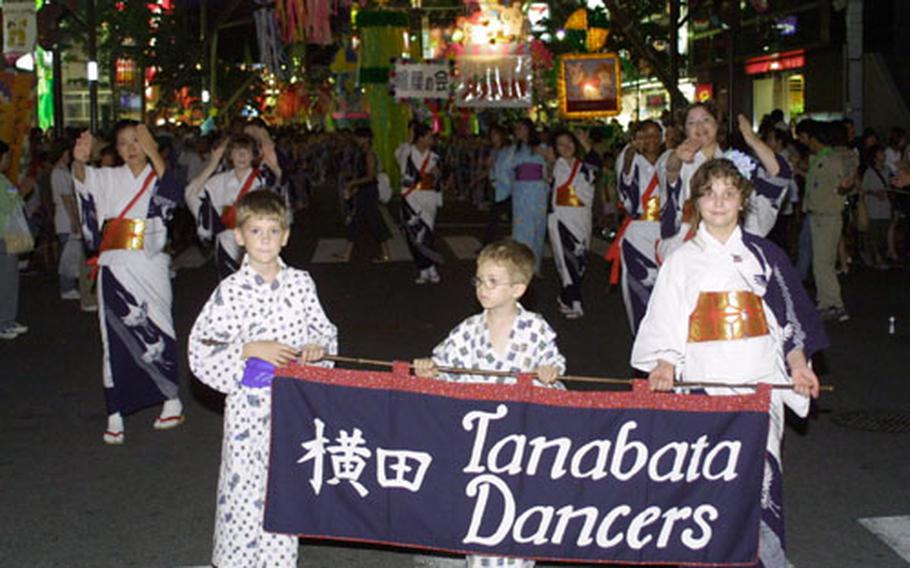 The Tanabata Dancers from Yokota Air Base, Japan, join 30 other groups in a three-hour procession along the traditionally decorated parade route of Fussa City during last year&#39;s Fussa Tanabata Festival. (Courtesy of Fussa City)

YOKOTA AIR BASE, Japan &#8212; The quiet city that abuts this air base&#8217;s front gate will come to life Thursday with the start of the 53rd annual Tanabata festival.

This year, 70 Yokota volunteers will carry the mikoshi, or portable shrine, during Fussa city&#8217;s most colorful festival. Yokota residents can be seen conveying the portable &#8212; albeit heavy &#8212; Shinto shrine at 3:30 p.m. Friday in a parade that winds from the Shinmei shrine, on the west side of Fussa station, to Fussa city hall on Sakae dori (avenue). It&#8217;s expected to last about 2 &#189; hours, said Masao Abe of Yokota&#8217;s 374th Airlift Wing public affairs office.

After the mikoshi parade, festivities will continue throughout the evening Friday with parades and a Tanabata tree-trimming contest, all in the area between Fussa train station and city hall, Abe said.

Other Tanabata activities are planned throughout the afternoon and evening on Saturday and on Sunday, as well. Highlights on Saturday include wadaiko (Japanese drums) at 2:15 p.m. at Fussa station&#8217;s west exit square; a 26-foot balloon slide, 3 to 7 p.m. at the fire hall west of the train station; a jazz-orchestra concert from 7 to 7:30 p.m. at Fussa station&#8217;s west exit square, followed by live Okinawan music from 7:45 to 8:30 p.m.