Talks break down on sharing costs of US troops in Korea 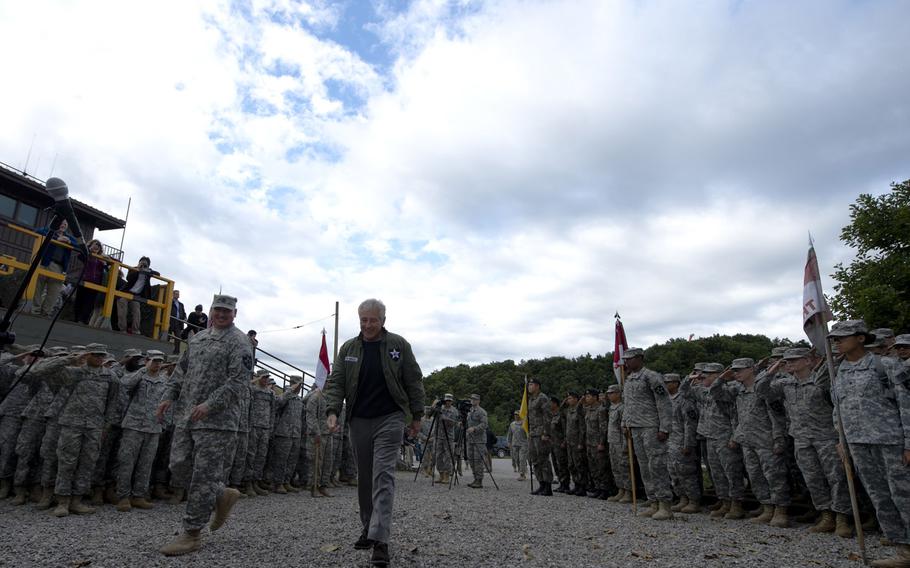 Secretary of Defense Chuck Hagel greets troops from the 2nd Infantry Division in the Republic of Korea, Sept. 30, 2013. Hagel visited with a few hundred American and Korean troops taking questions and thanking them for their service. (Erin A. Kirk-Cuomo/U.S. Department of Defense)

SEOUL — South Korea and the U.S. failed to reach agreement during two days of meetings this week on how much each country will pay for the upkeep of the 28,500 American troops stationed on the peninsula.

A spokesman for South Korea’s Ministry of Foreign Affairs would not discuss details of the latest round of talks on the Special Measures Agreement, saying only that Thursday’s meeting ended before noon with both countries agreeing to meet again, in November in the U.S.

A U.S. Embassy spokesperson could not be immediately reached for comment.

The two allies were expected to conclude discussions last month on renewing the SMA. The last cost-sharing agreement was signed in 2009, setting South Korea’s contribution for that year at about $775 million, with provisions for annual increases for inflation.

“Both sides’ positions are wide apart,” a government official told Yonhap, and “in-depth discussion is further needed in the future.”

South Korean media have widely reported that Seoul is refusing U.S. requests to substantially increase its SMA contributions. Yonhap also reported that in addition to disagreeing over how much each country will pay, a major point of disagreement is South Korea’s request for greater transparency in how U.S. Forces Korea spends its contributions.