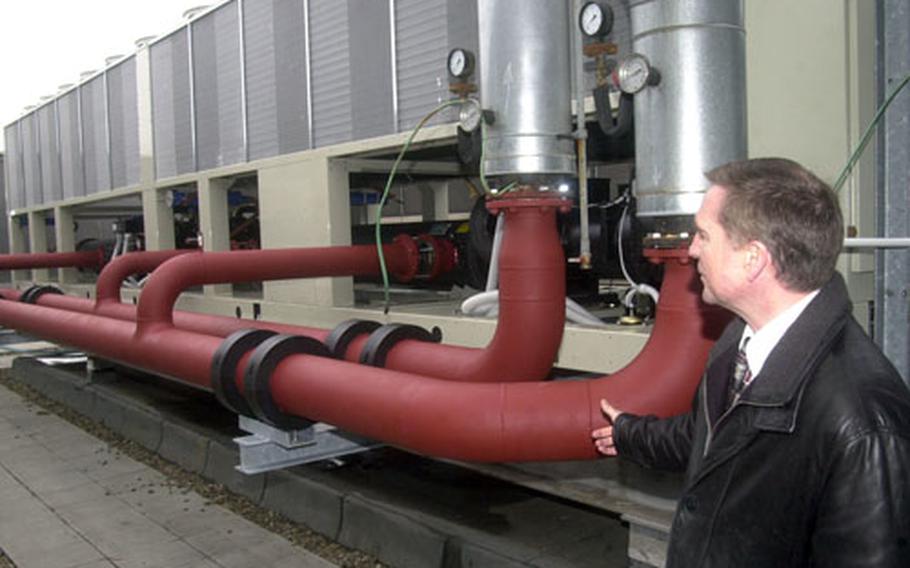 Michael Arseneau, chief of facility management at Landstuhl, explains the operation of a new chiller unit on the roof at Landstuhl Regional Medical Center. The chiller is part of a project to bring air-conditioning to the entire hospital for the first time since it opened in the 1950s. (Steve Mraz / S&S)

LANDSTUHL, Germany &#8212; A planning team from the States will visit Landstuhl Regional Medical Center this month amid renewed talk of replacing the 1950s-era hospital with a tower-like structure.

The tower is envisioned to cost $200 million and rise three stories. &#8220;We have a master planning team coming from the States to help us figure out exactly how big that tower would have to be,&#8221; said Michael Arseneau, chief of facility management at Landstuhl.

If all goes according to plan, designing the structure would start in 2011. Construction would start two years later and last for five years.

The idea of replacing the sprawling, spine-and-rib configured hospital with a more compact, vertically designed tower has been batted around for years.

Landstuhl&#8217;s design makes it inconvenient for doctors, nurses and patients to get around. In a tower, everything would be in closer proximity and different floors would be easily accessible by elevator. Previous studies have been done and experts have visited before.

While talks proceed on the tower idea, maintenance and renovation of the facility are in full swing. &#8220;The infrastructure is 50 years old and needs to be replaced,&#8221; Arseneau said. &#8220;We&#8217;ve been actively engaged in that over the last several years.&#8221;

In the past year, about 25 projects worth roughly $5 million have been completed at Landstuhl. The suites for labor and delivery were refurbished, the audiology clinic was renovated, and air conditioning was installed in several of the hospital wards.

Currently, interior work on the air-conditioning project is 80 percent complete and five months ahead of schedule. The entire project should be completed by the end of July, but some areas already were able to use their air conditioning last summer.

Forty-nine projects are under way at Landstuhl to the tune of about $39 million. Those projects include renovations to the Center for Health Promotion and Preventive Medicine Europe buildings, design and construction of a women&#8217;s health clinic, and renovation of the dining facility&#8217;s kitchen.

Landstuhl&#8217;s parking woes could be eased with a planned garage with as many as 700 spaces. Two locations &#8212; one near the existing helipad, the other across from the emergency room entrance &#8212; are under consideration. Landstuhl is being maintained and renovated to keep it safe and reliable until the day comes when a new tower is built, Arseneau said.