Taliban vow to keep fighting during Ramadan despite coronavirus concerns 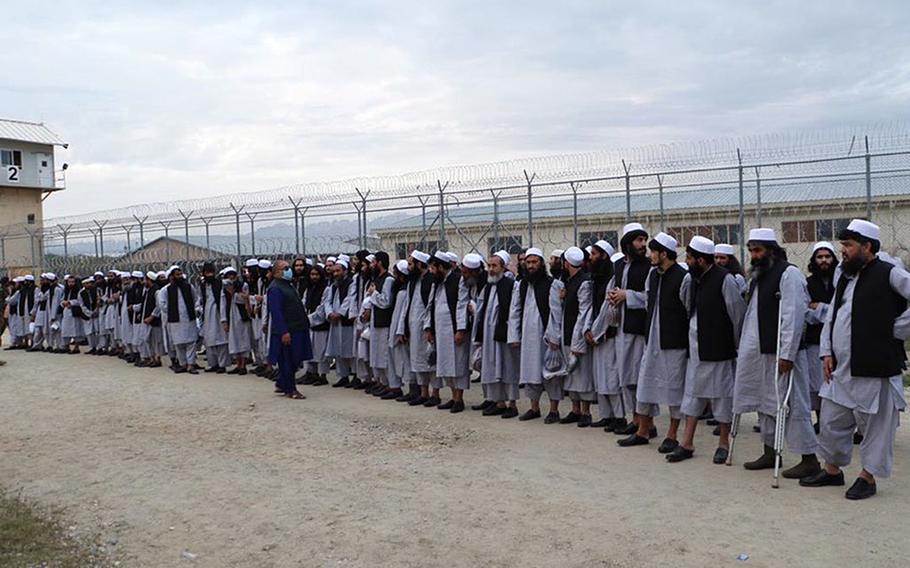 Taliban prisoners line up before being released by Afghan authorities in April 2020. The Taliban rejected calls from senior U.S. and Afghan officials for a cease-fire during the Muslim holy month of Ramadan, which started Thursday, April 23, 2020, until thousands more of its fighters have been released from government jails. (Twitter/Office of the National Security Council of Afghanistan)

KABUL, Afghanistan — The Taliban have rejected calls for a cease-fire during the Muslim holy month of Ramadan, despite warnings from U.S. and Afghan officials that the coronavirus outbreak in the country would worsen if violence continues.

A cease-fire would not be “rational and convincing” before thousands more Taliban prisoners are released from government jails, Taliban spokesman Suhail Shaheen said on Twitter Thursday. A prisoner release by the government and Taliban was one of the conditions of a deal signed Feb. 29 between the U.S. and the insurgent group, which was supposed to lead to talks between the Taliban and government and, by next year, the complete withdrawal of U.S. forces.

The U.S.’s top commander in Afghanistan, Gen. Scott Miller, told PBS News Hour this week that it would be “almost impossible” to stem the spread of the coronavirus if violence in Afghanistan continues.

President Ashraf Ghani repeated his calls for a ceasefire on Thursday, saying it would give Afghans much-needed respite from violence and would help efforts to slow the spread of the coronavirus.

As of Friday, about 1,300 confirmed cases of the coronavirus and more than 40 deaths from the disease it causes had been recorded in Afghanistan. Many of the cases are thought to have been brought into the country by Afghans returning from neighboring Iran, which has been hard hit by the virus. The Taliban launched a campaign earlier this month to tackle the spread of the virus in areas under their control, but they have refused to stop fighting. Attacks by the group have killed dozens of Afghan security forces in the past week alone.

Historically, the insurgents have not stopped fighting during Ramadan. With the exception of a seven-day “reduction in violence” ahead of the February deal with the U.S., the group has also not heeded recent calls from the Afghan leader, his international backers or humanitarian groups to lay down arms.

An uptick in violence since the February deal violates “the spirit” of the U.S.-Taliban deal, U.S. officials have said. Trump administration officials have said secret annexes to the deal outline a reduction in violence and other specifics of implementation, but U.S. lawmakers who have seen those documents have disputed those claims.

Under the terms of the Feb. 29 deal – which was reached without Kabul’s input – up to 5,000 Taliban fighters and up to 1,000 prisoners held by the insurgents should have been released by March 10 as a confidence-building measure ahead of talks between the Taliban and Afghan officials, which were supposed to start on the same date.

The Afghan government has so far released about 500 Taliban prisoners, including 55 who were freed Wednesday. But the Taliban, who have only released 60 government prisoners, insist all 5,000 of their fighters must be freed before ceasefire talks can begin.

If the prisoners are released and the U.S.-Taliban deal is “implemented fully,” Shaheen tweeted Thursday, “it will take us to a lasting peace and ceasefire.”