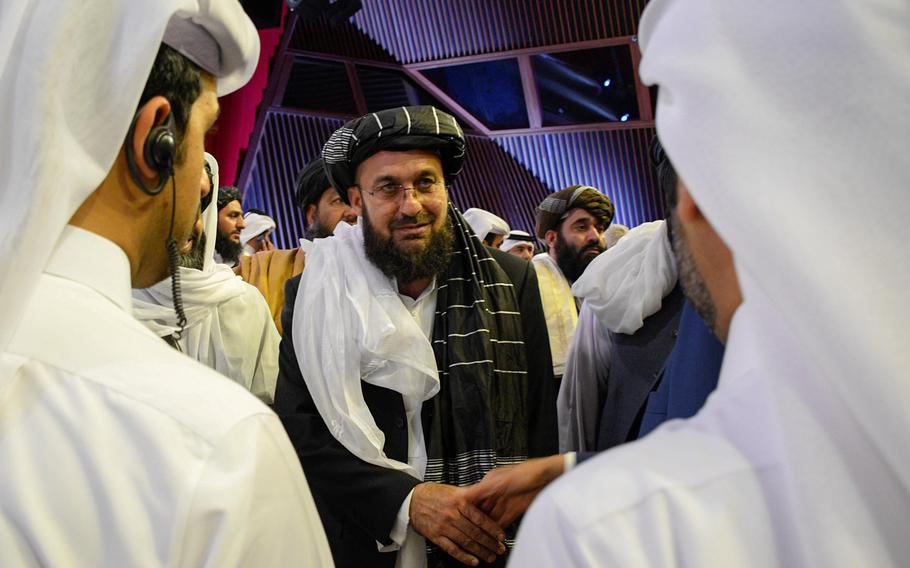 Buy Photo
A Taliban official greets others Feb. 29, 2020, in Doha, Qatar, after the group signed a deal with the U.S. that would lead to a withdrawal of foreign forces if the Taliban meets certain conditions. Afghan government officials are expected to depart Thursday for Doha to begin talks with the Taliban. (J.P. Lawrence/Stars and Stripes)

KABUL, Afghanistan — Taliban negotiators are likely to oppose any proposal for the U.S. to establish a lasting counterterrorism presence in Afghanistan during upcoming peace talks with the government in Kabul, analysts said.

While President Donald Trump has often called for a troop withdrawal, he also said the U.S. is “going to always have a presence” in Afghanistan for counterterrorism in an interview on Fox News radio last fall. Trump envisions the Taliban helping the U.S. fight the Islamic State, he said in a White House press briefing in February.

Some lawmakers, including Republican Sen. Lindsey Graham, also have proposed leaving such a residual U.S. force to prevent the country being used again as a launchpad for global terrorism.

But any remaining foreign presence is a nonstarter among Taliban members, said Andrew Watkins of the International Crisis Group, which released a report Tuesday on the group’s internal views.

“Members of the Taliban we spoke to, at all levels of the organization, in all parts of the country, said this was a non-negotiable issue, that there cannot be a Western footprint,” said Watkins, the Brussels-based think tank’s senior analyst for Afghanistan.

The report, based on interviews with Taliban, Afghan and Western officials over several years, comes ahead of intra-Afghan negotiations expected to begin after the government’s representatives depart for Qatar on Thursday. The initial talks are expected to review terms for a cease-fire.

The U.S.’s promised withdrawal of all American and allied forces by the middle of next year isn’t contingent on the success of the talks, but on whether the Taliban break ties with al-Qaida and block such terrorist groups from using Afghan soil to train, recruit or raise funds.

The U.S. already has fewer than 9,000 service members in the country, and both Trump and Defense Secretary Mark Esper have said recently that plans call for that number to drop below 5,000 by Election Day.

So far there is little indication that the hard-line Islamist insurgents have distanced themselves from al-Qaida.

Lawmakers in Washington have questioned how the U.S. plans to ensure the group complies with the peace terms after foreign troops leave. Military planners and analysts have suggested a continuing presence of mostly special operations.

“The right answer is to reduce U.S. troops strength, but maintain sufficient forces to prevent a resurgence of terrorist activities,” said James Stavridis, a retired admiral who oversaw operations in Afghanistan as NATO’s supreme allied commander from 2009 to 2013.

That would require about 5% of the 150,000-troop force Stavridis commanded at the height of the war, he said.

But Taliban leadership would have a hard time selling the notion to the rank-and-file, said Bokhari, of the Washington-based Center for Global Policy. It would require major concessions, he said.

“How do you compromise and not look like you caved in?” Bokhari asked. “They’re going to want something really big in exchange, like changing the [Afghan] constitution.”

Even if a U.S. force were to remain, the prospect of cooperation with the Taliban raises doubts, Bokhari said.

“It’s not easy to go from shooting people to saying, ‘Let’s all go fight (Islamic State-Khorasan) and al-Qaida and the other foreign fighters,” Bokhari said.

The Taliban faces being viewed as an international pariah like it was in the 1990s if it can’t convince other nations that they’re serious about fighting terrorist groups, said Omar Samad, a former Afghan ambassador and government adviser.