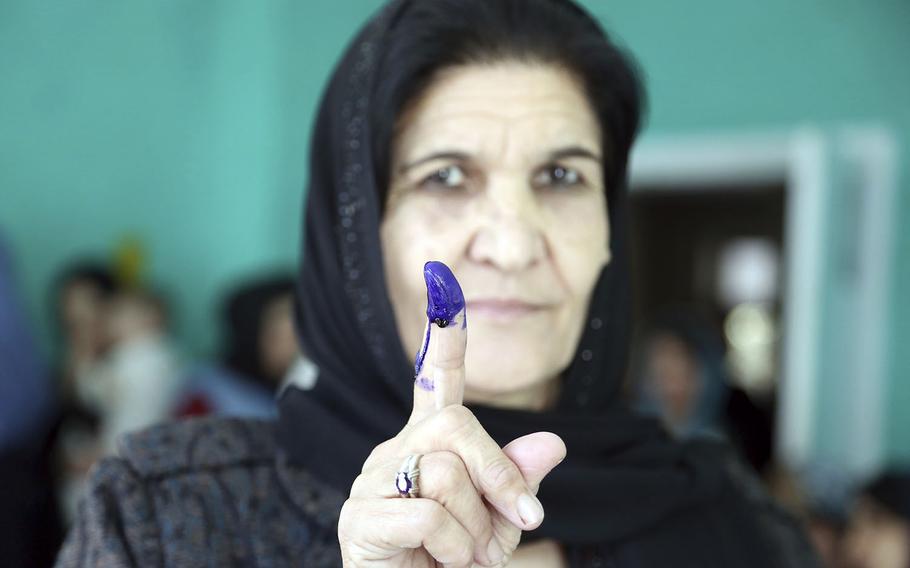 An Afghan woman shows her inked finger after casting her vote at a polling station during the Parliamentary elections in Kabul, Afghanistan, Saturday, Oct. 20, 2018. (Rahmat Gul/Associated Press)

KABUL -- On the first day of Afghanistan’s long-delayed parliamentary elections, Bashir stayed home with his family in Logar province.

Bashir, who wanted to be known by his first name for security reasons, did not vote. Nor did anyone in his village, he said. Asked why, Bashir cited the words written on the walls in his village of Muhammad Agha: “If you vote, we will cut your hands.”

Scenes of crowds of voters in Kabul clashed with empty polling places in more rural areas, according to election observers and analysts. When combined with registration issues and potential fraud, the divide between urban and rural voting patterns in a country that is 70 percent rural may hamper whether the election is seen as legitimate by the Afghan people.

“The Taliban effectively rule much of the rural space,” said Thomas Ruttig, co-director of Afghanistan Analysts Network, adding the militant group is “able to scare voters away” from voting in rural districts.

In Logar, the network found the Taliban were not allowing anyone into polling centers in Bashir’s village of Muhammad Agha. Locals shared photos of Taliban in camouflage uniforms on motorbikes. In another village, Afghanistan Analysts Network found that people arrived to vote but encountered no election workers, no ballots, no voter lists. So they left.

“The turnout for yesterday’s election was really, really low compared to the registered number of people announced,” said Mohammad Naeem Ayubzada, director of the Transparent Election Foundation of Afghanistan.

There probably were never that many registered, according to Ayubzada, who said his organization sent more than 7,200 observers to polling stations. He said he is worried that rural areas are more prone to fraud.

The Taliban vowed to attack elections and conducted nearly 200 attacks across the nation on Saturday, according to Deputy Interior Minister Akhtar Mohammed Ibrahimi. In addition to districts where no voting was planned due to insecurity, some polling stations remained shut in Helmand and Samangan provinces, and four poll observers were killed in Balkh, according to news reports by Pajhwok.

In Zabul province, ongoing fighting prevented voters from coming to polls. The government conducted air strikes Saturday afternoon in three districts in Zabul, killing 25 Taliban, according to the governor, Rahmatullah Yarmal. No soldiers or police were wounded in operations to clear the province before the vote, although a mortar hit a house and killed two children, Yarmal told Stars and Stripes.

Only 18,000 people, or less than a third of registered voters, came to the polls Saturday, Yarmal said, but he added he is proud that that many came.

“Overall, I am very happy that we had (a) peaceful election that was 100 percent transparent too,” Yarmal said.

Ruttig said the turnout in Zabul show the influence violent threats can have on elections.