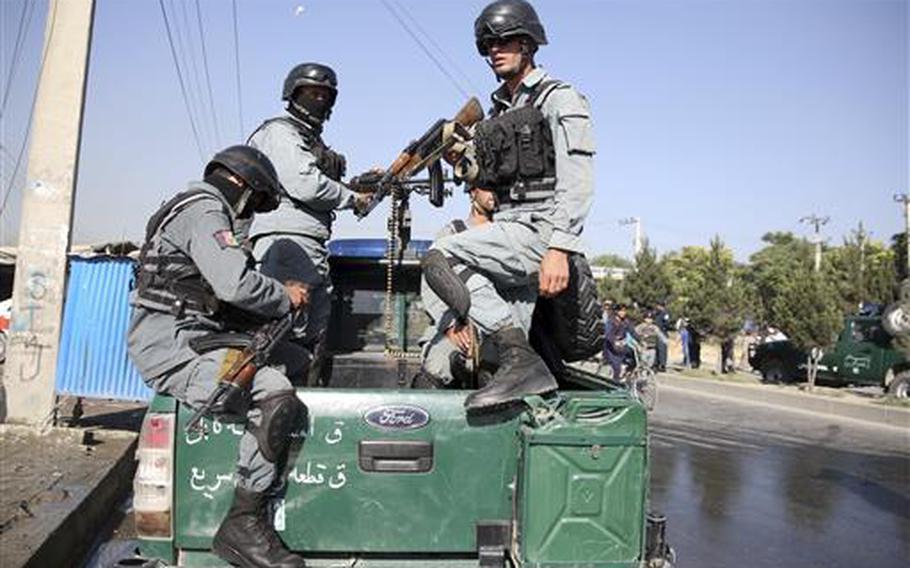 Afghan military police prepare to leave the site of a suicide attack in Kabul, Afghanistan, Monday, June 20, 2016. About a dozen people were killed Monday when a Taliban suicide bomber targeted a minibus in the Afghan capital, a government official said. (Massoud Hossaini/AP)

KABUL, Afghanistan — At least 14 Nepalese security guards were killed in an attack by a Taliban suicide bomber in Kabul on Monday, officials and the insurgents said.

Separately, 10 civilians died in an explosion at a market in northeastern Badakhshan province.

The violence adds to a growing sense of insecurity across the country, which has witnessed a recent spike in insurgent attacks.

The Associated Press reported the victims were traveling to the Canadian Embassy where they worked as guards. Numerous foreign missions and international agencies employ private contractors from Nepal and other countries to protect their premises.

Nine other people were wounded in the attack, including four Afghan civilians, police spokesman Abdul Basir Mujahid said, adding that the suicide bomber approached the bus on foot.

“Horrific attacks like these show that, despite the Taliban’s promises, they have a complete disregard for the lives of innocent civilians,” NATO spokesman Brig. Gen. Charles Cleveland said in a statement.

Meanwhile, 10 civilians were killed and 40 others wounded when a bomb attached to a motorcycle exploded in a crowded market in Badakhshan province’s Keshm district, provincial government spokesman Naveed Frotan said.

“Women and children were among those killed,” Frotan said, “all the victims were civilians.”

No group claimed responsibility for that attack.

The Kabul blast highlighted the threat posed by the Taliban under new leader Mawlawi Hibatullah Akhundzada, who assumed command of the fundamentalist group after a US drone strike killed former leader Mullah Akhtar Mansour in Pakistan last month.

The Taliban has stepped up attacks on the capital since 2014, when most international troops pulled out of Afghanistan, often targeting foreigners or government workers. Last month, a string of attacks on justice ministry staff in Kabul left around a dozen people dead. Another suicide bomber killed 64 people and wounded 340 others in April.

In addition to the bombings, a number of abductions of foreigners in the capital has led many international organizations to restrict the movement of their employees, impose curfews, and hire armed guards.

Afghans throughout the country have also expressed concern over the current security situation.

A recent Pentagon report revealed Afghans feel less secure than at any other time in recent memory, with only 20 percent of those surveyed describing security as good. A record 42 percent said security was worse than during the time of the Taliban, which ruled the country from 1996 to 2001.