Taliban resume efforts to halt elections after end of cease-fire 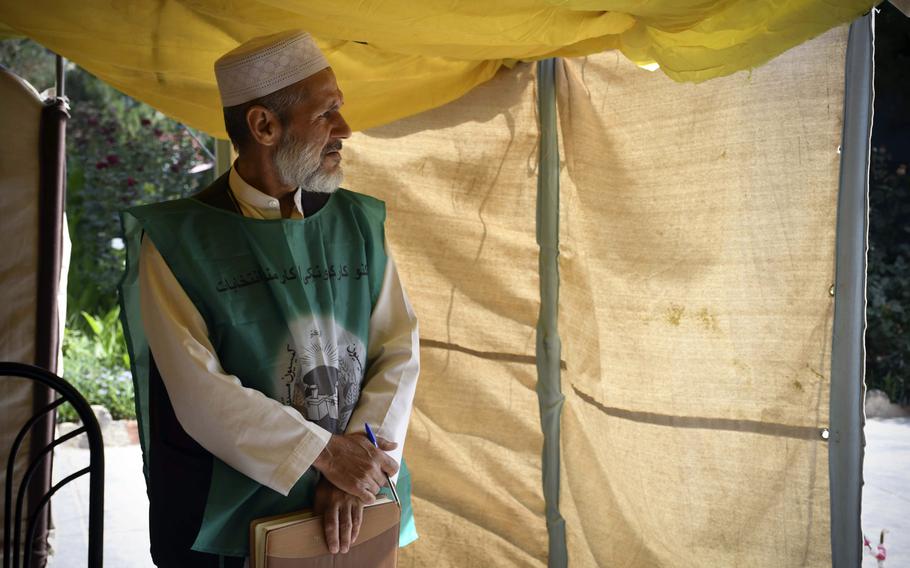 Dost Mohammed, a Herat man working at a voter registration booth, waits for citizens to arrive June 4, 2018. Security concerns and attacks on voter registration sites have scared away many Afghans from signing up to vote in the long-delayed provincial and district elections scheduled for October. (J.P. Lawrence/Stars and Stripes)

Dost Mohammed, a Herat man working at a voter registration booth, waits for citizens to arrive June 4, 2018. Security concerns and attacks on voter registration sites have scared away many Afghans from signing up to vote in the long-delayed provincial and district elections scheduled for October. (J.P. Lawrence/Stars and Stripes) 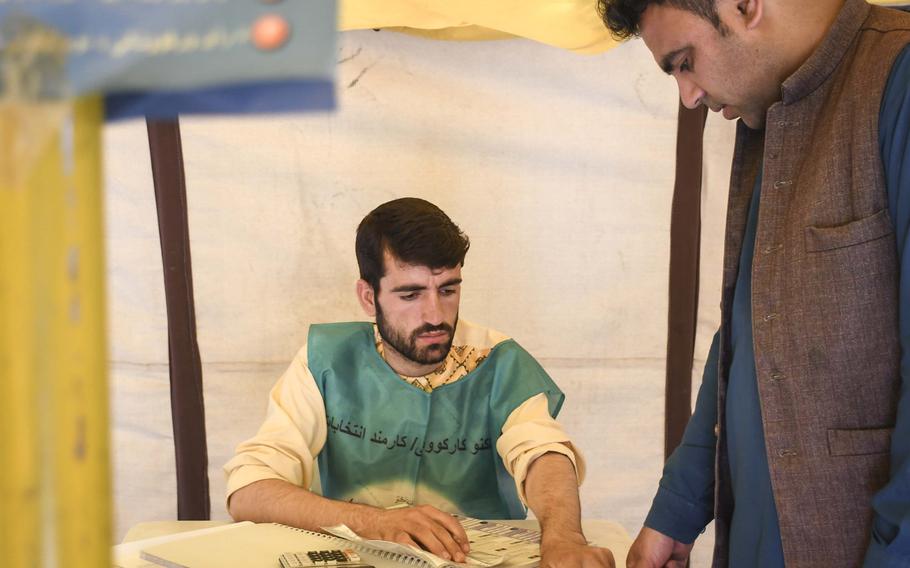 Mohammed, a Herat man working at a voter registration booth, who like some Afghans goes by one name, registers Abdullah, on June 4, 2018. Security concerns and attacks on voter registration sites have scared away many Afghans from signing up to vote in the long-delayed provincial and district elections scheduled for October. (J.P. Lawrence/Stars and Stripes)

HERAT, Afghanistan — Taliban gunmen killed seven as they stormed an election registration site in Nimroz province Thursday, in a new round of attacks on Afghanistan’s hopes for safe elections this October following the end of a short cease-fire.

Taliban attacks on registration efforts in Afghanistan have led to concerns about whether the country’s district and provincial elections, already three years late, will happen on time.

Elections have long been a priority for Western countries in Afghanistan, with Gen. John Nicholson, commander of NATO’s Resolute Support Mission, declaring that credible elections are part of the strategy to pressure the Taliban to reconcile.

The Taliban have called for an election boycott and have killed at least 86, wounded 185 and abducted 26 civilians in attacks against election sites since April, according to a May report by the United Nations Assistance Mission in Afghanistan.

“This psychological war that the Taliban has started has made an impact, unfortunately,” said Mohammad Asif Rahimi, governor of Herat province in western Afghanistan. “It has slowed down the registration of people.”

In Herat earlier this month, the voter registration site in a downtown school had only two visitors over the course of an hour.

Only 22 percent of people in Herat have registered to vote, according to figures from the election commission website and an estimate of the population of the province.

In eastern Afghanistan, Abdul Samad, 42, a farmer from Laghman province, says that he did not register to vote because he didn’t want to carry an ID telling the Taliban he wanted to participate in the election.

“Taliban comes to our village once in a while, and if they know that a person has participated in the election, they will kill him,” Samad said. “I will vote when it is peaceful in my area, when everyone can feel free to go and vote without any fear of being killed or wounded.”

NATO officials say they want to avoid anything like the contentious presidential elections of 2014. Those elections led to a split government and almost led to ethnic civil war, with at least 242 violent incidents leading to 74 killed and 306 wounded, according to a U.N. report.

NATO planners will also be part of a special working group on elections proposed by President Ashraf Ghani. The group, which will also include U.N. and Afghan representatives, will support the 2019 presidential election.

“If we can have secure and credible elections that allow people to choose their leaders,” Gliddon said, “then clearly the government here is going to be more credible, not only in the eyes of the citizens of this country, but by the enemies of this country.”

Violence ebbed in Afghanistan after joint cease-fires between the Taliban and government fighters during the Eid holiday, which led to images of soldiers hugging and taking selfies with each other.

Attacks by the Taliban have resumed in recent days, however, including a deadly attack in Badghis province that killed at least 30 Afghan soldiers Wednesday.

Mohammad Naeem Ayubzada, director of the Transparent Election Foundation of Afghanistan, who said he has worked as an election observer since 2004, said failure this year may doom the democracy experiment in Afghanistan.