Taliban respond with rocket fire to Kerry’s calls for peace 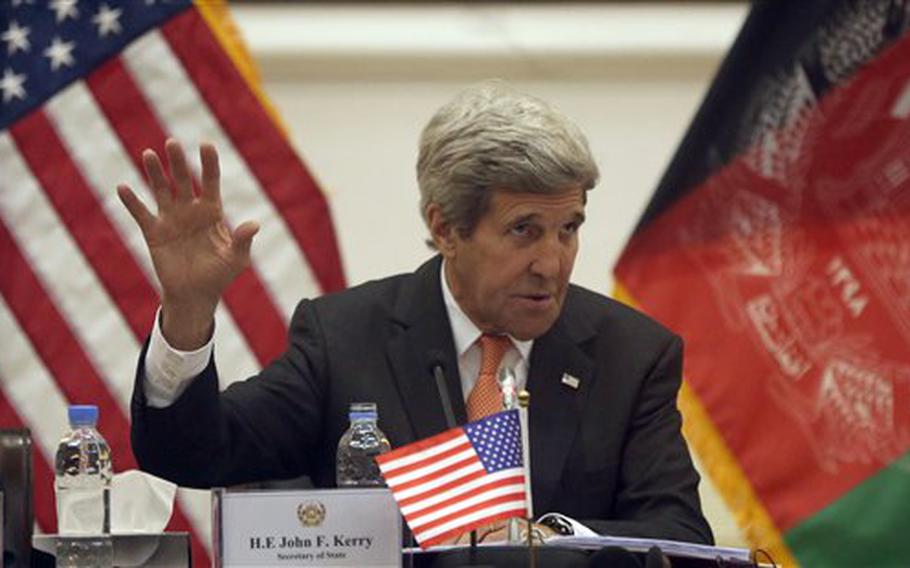 U.S. Secretary of State John Kerry speaks during a joint conference with Afghan Foreign Minister, Salahuddin Rabbani, in Kabul, Afghanistan, Saturday, April 9, 2016. Kerry hoped a brief stop Saturday in Afghanistan would help promote cooperation from a would-be "unity" government that has proved largely incapable of running the country less than two years after he worked to install the leadership team. (Massoud Hossaini, Pool/AP)

KABUL, Afghanistan — The Taliban claimed responsibility Sunday for a rocket attack on Kabul’s diplomatic area which came just after U.S. Secretary of State John Kerry ended a surprise visit by calling on the insurgents to come to the negotiating table to end the 15-year war.

Kerry told reporters late Saturday in Kabul that “the people of Afghanistan should be demanding that the Taliban, who are the only people holding out on that possibility, actually engage in (the peace) process.”

A Taliban spokesman said on Sunday that the rocket attack, which caused no casualties, was meant to undermine Kerry’s visit.

“This shows foreigners cannot remain safe in any spot in the country and we can target them wherever they are,” said Taliban spokesman Zabihullah Mujahid. “We couldn’t know exactly where he was (but) at least we could sabotage his visit and send a message he is not welcome here.”

According to officials, at least two rockets hit the heavily-guarded diplomatic zone in the late evening. By that time, Kerry was at Bagram Air Field, 35 miles north of the capital, getting ready to leave the country.

Kerry was in town to participate in the third meeting of the U.S.-Afghan Bilateral Commission, to underscore the commitment of both countries towards a stable, self-reliant Afghanistan. The two sides agreed that to achieve stability, the Taliban must engage in dialogue.

“Today we call on the Taliban to enter into a peace process — a legitimate process, a real process — that provides equal rights protection for all Afghans and brings to an end the violence and suffering that the people of this country have endured for so many years,” Kerry said at the joint press conference with Afghan President Ashraf Ghani.

The United States, along with Afghanistan, Pakistan, and China has been working to initiate peace talks between the Afghan government and insurgent groups before the start of the spring fighting season.

Exploratory talks between representatives of the insurgents and the government fell apart last summer after the announcement that longtime Taliban leader and founder Mullah Mohammad Omar had died two years earlier. Since then, his successor Mullah Akhtar Mansoor has said his followers would not participate in new peace talks unless a number of demands, including a complete withdrawal of foreign troops from the country, were met.

While Ghani did not comment on his feud with Chief Executive Abdullah Abdullah, which has hampered the government’s efficiency for two years since disputed presidential elections, he said ministers were committed to reforms ahead of international meetings in coming months that could ensure aid and long-term security commitments for Afghanistan.

He was referring to the NATO summit in Warsaw in July and the Brussels Ministerial Conference on Afghanistan in October.

“I would like to assure people of Afghanistan and people of the world that our fight against corruption and our political will for reforms is a comprehensive one.”

According to current U.S. plans, American troop strength in Afghanistan will be reduced from 9,800 to 5,500 at the beginning of next year. Gen. John Nicholson, the new commander of U.S. forces in the country, is reviewing the security situation before making recommendations about future U.S. involvement to Washington.

Kerry wouldn’t speculate on whether the drawdown timetable may change.

“I am absolutely confident that whatever the president is going to do in the future is going to be guided by the people on the ground and by Gen. Nicholson’s report,” he said.